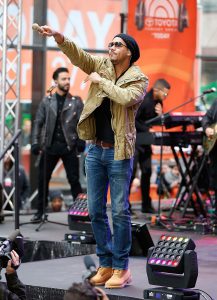 NEW YORK – Bronx–born Bachata superstar Romeo Santos has chalked up many milestones in his hometown of late. In 2014, he became the first Latin music star to headline sold out concerts at the new Yankee Stadium. Before that he sold out Madison Square Garden three nights in a row. The Billboard Latin Music Award Artist of the Year just added another New York City landmark appearance to his resume, when he performed on the Today Show’s iconic Rockefeller Center stage as part of Viva Latina Week.

Lighting Designer Peter Greenbaum ensured that the famous stage had a vibrant and dynamic look that matched Santos’ electrifying sound by illuminating it with 10 Next NXT-1 moving LED panels from CHAUVET Professional.  Greenbaum positioned six of the fast moving RGBW fixtures on the downstage deck and four on upstage boxes to create sweeping visuals that accented the choreography of the Santos performance.

“Drew DeCorleto of WorldStage told me about the NXT-1 six months or so ago,” said Greenbaum. “I have a great relationship with WorldStage and rely on them to help keep me on top of new concepts and technologies that can impact my shows. Their sense of how new fixtures can fit what I’m doing is really excellent, so I have a great deal of trust and respect for their input. Introducing me to the NXT-1 is another example of how WorldStage has helped me.”

Greenbaum originally planned on hanging the NXT-1 units from the Today Show’s upright trusses, but ultimately opted to position them on the deck and boxes. “It was a last minute decision, but a good one,” he said. “The way the units were positioned gave the stage a dance floor look. I was very happy with the outcome.”

Running the NXT-1 moving panels at 40% brightness, Greenbaum relied on the fixture’s built-in dynamic patterns to create captivating images on the Today Show concert stage. He praised the rich colors produced by the panels. “Television lighting depends on color, and the NXT-1 excels in this area,” he said. “It’s an exciting effect that comes off very well on camera with its vivid colors, narrow beams, sharp colors and fluid movements. I’m looking forward to using it again. As a designer, it’s the kind of effect that you enjoy working with, because aside from looking great, it’s also a lot of fun.”