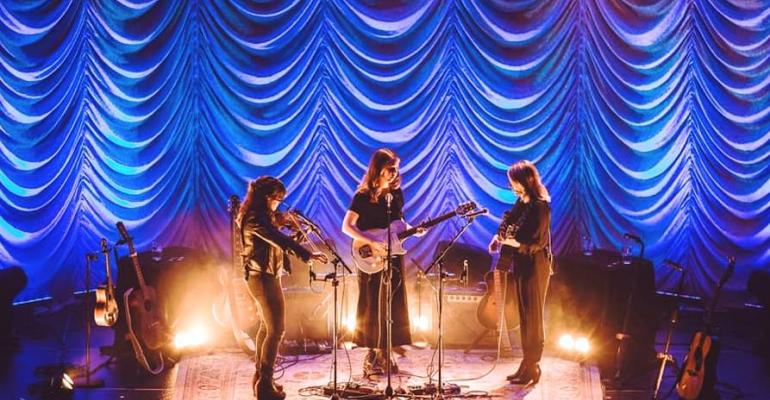 William Succoso’s list of favorite design tools includes one item that isn’t a lighting fixture at all, but a puffy fabric with vertical lines, aka The Austrian Drape. The New York-based designer, and former house LD at the legendary Bowery Ballroom, prizes the distinctive textile not just for its aesthetic appearance, but also (and more importantly), because of the infinite variety of ways that light plays off its undulating folds when it’s used as a backdrop.

Rather than being a static element that fills negative space, a backdrop should, in Succoso’s view, be a living, breathing part of a design that reflects and absorbs light to contribute to a dynamic flow on stage.

Light’s power to transform a backdrop into something that unifies a design, while endowing it with the ability to reach audiences on a deeper emotional level, was made very evident to us when we saw Succoso’s work for I’m With Her on the AMA nominated band’s 2019 Winter Tour. Positioning his Austrian drape drop behind the trio, he illuminated it from above and below. Through his lighting, he not only changed the fabric’s color, he also created a rippling effect on its surface that flowed seamlessly with every guitar chord, as if springing forth from the music itself.

Following the conclusion of that tour in March, we caught up with Succoso to talk about the ways light interplays with different backdrop material, and magic it creates.

What do expect a backdrop to add to your design?
“For me, it’s all about transforming the space for the evening. When a tour rolls through a venue, there are probably going to be plenty of people in the audience who have seen that house’s stage space multiple times before. Part of my goal as a designer is to figure out how to surprise those people, so they feel like they’re experiencing that space for the first time. A drop/backdrop is one very easy way to do that. It can be as simple as the band name in big letters on a drop, or something more involved like a pipe and drape set up.”

Speaking of a draped drop, in your work for I’m With Her, you incorporated the background into your design by having light play off the folds of the Austrian drapes. Can you tell us about that?
“I’m a big fan of Austrian drapes. For something that seems as simple as a folded drape, they are extremely versatile. In their most basic form, a colored Austrian drape really transforms a space. I’ve done some tours with bands where we’ve traveled with red drapes that we would hang upstage and on the downstage legs if the space had them. This would turn every venue into our own little vaudevillian theatre. Once you start lighting them and playing with the different textures they provide, they can really start to get interactive.

“With the I’m With Her tour in particular, I had some linear fixtures uplighting the drapes and then used moving heads to project the occasional gobo or to reinforce some color. When we went through venues that had some good wash movers above, I would downlight the drop as well. Doing this really let me play with the texture of the drop. With some slick programming, you can really make an Austrian drape drop dance.” 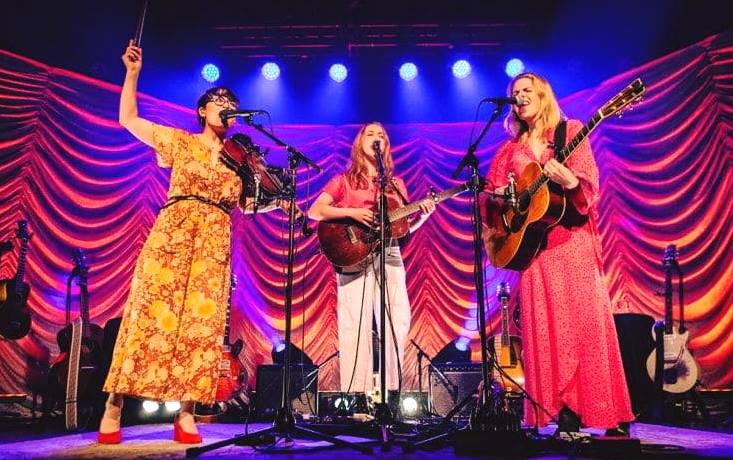 I’m With Her was an intimate show with a trio. So would your approach to creating a backdrop differ if it was a bigger show with a bigger stage and there were more people in the band?
“It’s is all about trying to frame the band, and there are a few ways I’ve been able to pull this off with bigger shows. It’s super easy to just take the I’m With Her concept and just make it bigger by adding more pipe and drape. However, if it’s a set up that is pretty much edge to edge on the stage space, I like trying to incorporate more ‘banner’ style legs on the downstage that will complement or extend the theme of whatever the backdrop is. This still allows a designer to frame out the band without the need to shrink the stage space.”

Any thoughts on how to use lights to accent a fabric backdrop to optimal effect?
“Well I think that comes down to what someone is trying to do with a show. If you uplight or downlight fabric at a 90-degree angle, you’ll show off the most texture, but shooting straight on from a distance is better for projecting images/gobos. So your design goals are going to influencing how you light the backdrop. It also really depends on the material that the backdrop is made of. I have some drops out currently that are better backlit than from the front.”

On the subject of backdrop material, how do you light something made of a substance that is harder than fabric?
“Obviously, the less translucent the material is, the more you are stuck with just front lighting versus backlighting, as an example of how you approach different materials. It’s always fun to play with different materials and angles with lighting to see what works best. In the past year, I did a show with the Punch Brothers where we had a drop with a very dark image printed on it. I initially thought I’d be uplighting it to brighten it up a bit, and instead it just washed the design out. I then backlit it just as an experiment and that wound up looking awesome.”

Do you ever use set piece lighting fixtures as a backdrop? How does this influence your design?
“Sure have! I’ll have to dig up some pictures, and that’s exactly what I did with The Devil Makes Three on our tour to Red Rocks last May. I used pod fixtures on C stands to create the illusion of there just being bulbs behind the band. When we went to Red Rocks, I doubled up with some actual two-cell lights to create a nice tiered effect behind the band. This was a great way to have something to break up the negative space, but not cover the iconic background that is Red Rocks.”

Can you ever use video walls with an elaborate backdrop? Or does one preclude the other?
“I don’t think there is any one thing that excludes another, it’s just a matter of how creative one wants to get. I think there could be some really cool designs where a backdrop, or maybe a curtain with headers, could frame a video wall nicely so it’s not just your standard rectangle video wall.”

What is the most important thing to keep in mind when incorporating a backdrop curtain into your design?
“Well, I think it again comes down to overall concept. For Com Truise, the current artist I am out with, we hang a flat white backdrop to act as a cyc to project onto. With that look, the ‘drop’ really becomes the focal point of the show. In other shows like the Punch Brothers or I’m With Her, it’s really there to support the music and not be distracting. In the end, I think it’s important to set intentions with something like a drop — or really any aspect of lighting design — and then run with it.” 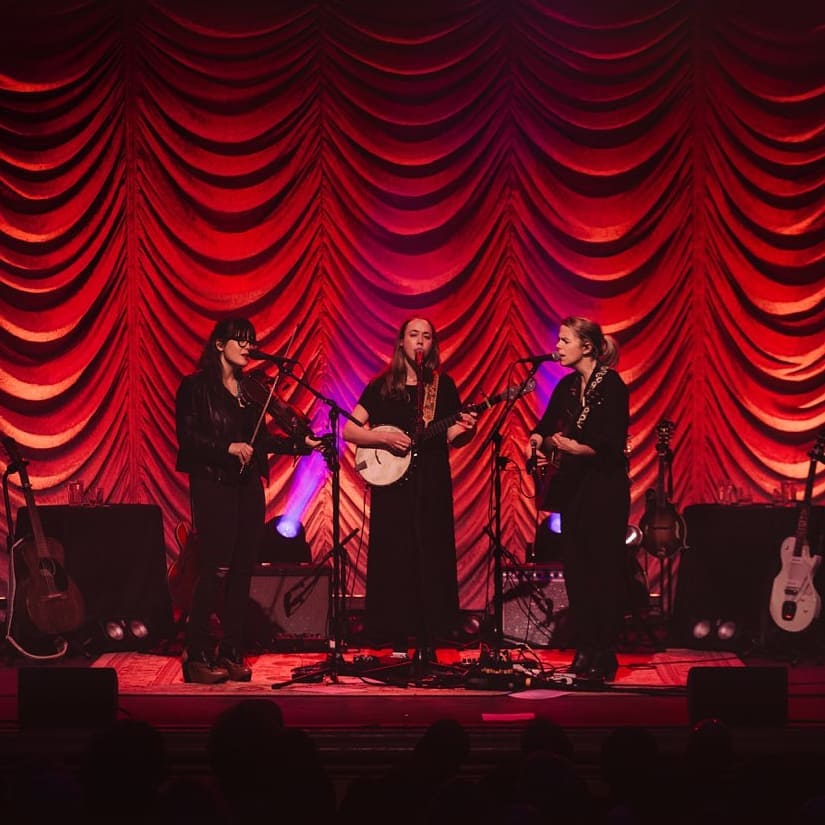