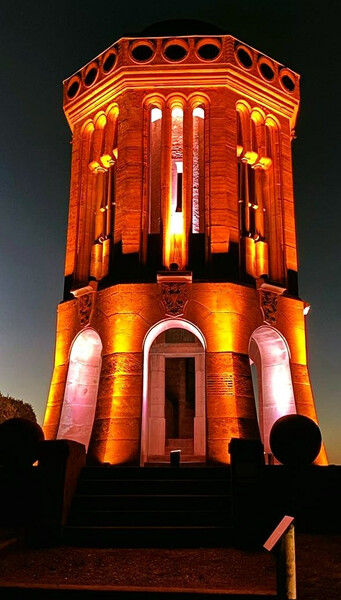 WOERTH, FRANCE – Walking through the rolling woods of fir and oak, it’s hard to imagine this gentle section of the Alsace region as being anything but a peaceful. But 150 years ago, this tranquil spot on the banks of the Sauer was the site of a ferocious and desperate battle that opened hostilities in the Franco-Prussian War, or the War of 1870 as it is sometimes called.

Involving thousands of French and Prussian soldiers, the Battle of Reichshoffen was marked by valor and heroism on both sides. In August, the people this region commemorated the 150th anniversary of the legendary struggle by gathering at some of the solemn monuments that dot its landscape while following social distance protocol.

Among the most impressive of these structures is Le monument Belvédère, a stately 20-meter stone tower built to memorialize the soldiers of the Hessian Fieldartillerie Regiment No. 11, which fought on that long-ago summer day.

Accentuating the powerful effect of the pillared monument was a balanced and colorful lighting design by TRS Sonorisation that featured CHAUVET Professional WELL Fit LED fixtures.

“The Town Hall of Woerth requested something for the commemoration of the 150th anniversary of the battle,” said Christophe Gasser of TRS. “We used the rich colors of the lights to create looks that marked the occasion, while complementing the beauty of the site and the monument.”

Gasser and his colleagues at TRS positioned 34 of the WELL Fit units at the monument. They strategically arranged the IP65-rated RGBA luminaires at the eight base columns of the structure. Because these massive columns were constructed to create Romanesque archways, the ground level of the monument is an open-air area. When illuminated by the vividly colored light of the WELL Fits, this area took on a redolent glowing lantern-like appearance, as if it was lighting the way for distant memories to make their presence felt.

Other WELL Fit units were positioned at the base of the long narrow vertical slit openings of the monument’s second level. Their light gave the upper section of the tower a captivating iridescent quality. Since the fixtures were place on the exterior side of the window’s base, their output colorized the outside of the structure, reaching all the way to the tower’s cornice to create a colorful crown of light

Flowing together in visual harmony the lighting design on the lower and upper sections of the tower, created a fittingly moving remembrance of events that have shaped the history that echoes through this distinct, and distinctively beautiful region. 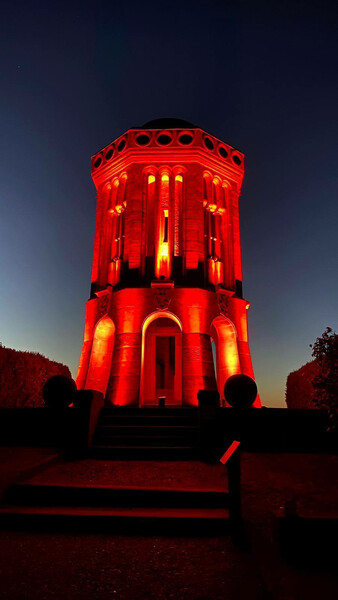