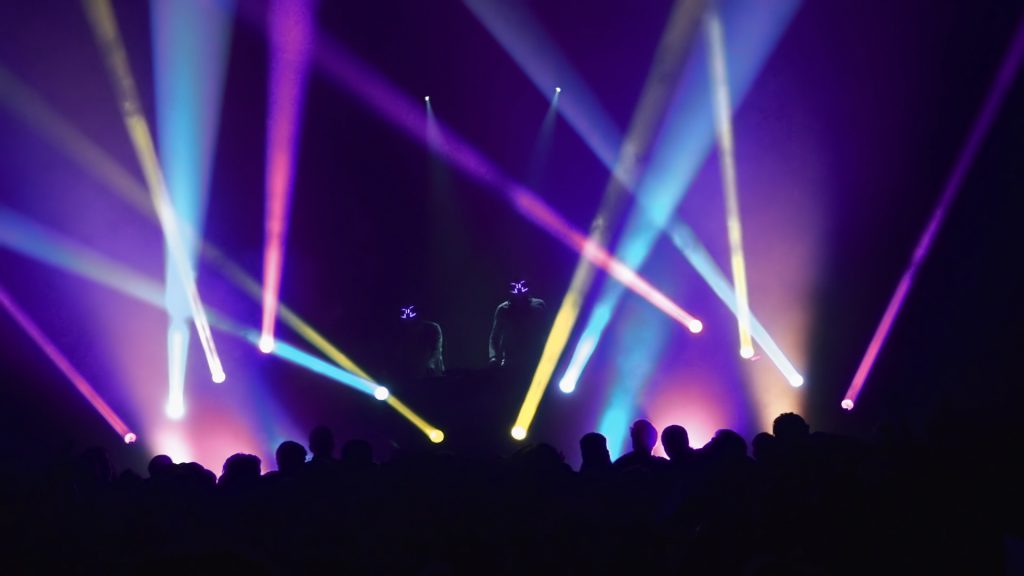 NEW YORK – The good times never slow down for fans of The White Panda, the masked DJ duo described by Entertainment Weekly as a “veritable party machine.” The infectious energy of their performance comes not only from their pulsating sound, which puts a sassy EDM twist on throwback classics, but also from their immersive stage shows, a mixture of theatrics, eye candy and pure intensity.

On their recent tour of the northeast US, The White Panda added an extra futuristic flourish to their performance with an expansive lighting and video design by Antic Studios that featured CHAUVET Professional Rogue fixtures. Strategically positioned around the set’s rows of video panels, the moving lights added a sense of continuity and dynamic movement to the stage.

“We used the Rogues to connect the video panels visually by filling in the space between them with a lot of movement and vivid colors,” said Ryan Warffuel of Antic Studios. “The set created a space age impression, because this reflects the forward-looking image of The White Panda. Having a continuous look that flowed throughout the entire stage was key to creating this feeling. Given the quick pan and tilt movement of the Rogues, we were also able to enhance the mood by shooting a lot of bright and colorful beams across the stage in various patterns.”

Warffuel, who designed the lights for the tour while his partner Max Koehler took care of the video, used 12 Rogue R1 Beam and six Rogue R2 Wash fixtures in The White Panda rig. He positioned four of the beam units on each side of the stage above the LED tiles, and four in the middle of the stage in an area between the tiles.

“We had the fixtures follow the configuration of the LED tiles on stage,” said Warffuel. “The panels were arranged in descending order. Having the Rogues above them accented this pattern and made it more impactful. Meanwhile, our four center stage Rogues were critical to combining the left and right side of the stages into a single visual.”

Arranged along the upstage deck, three on each side, the six Rogue R2 Wash fixtures also flowed with the descending video tiles. Warffuel angled the wash units backwards, so they delivered a full range of movements without interfering with the video images. “Having the washes move freely across the backdrop really made the stage design look like one solid panorama,” he said. “The movement from these washes played off perfectly against the video images.”

The Antic Studios team, which in addition to Warffuel and Koehler, included lighting and video techs Brandon Rathke and Colton Oltesvig, positioned a diamond-shaped backdrop behind the DJ stand in their design. “Our solid backdrop fit in the middle area of the set very well,” said Koehler. “It also matched angles of the DJ booths. By going with this design, we were able to show video on a larger solid surface.”

To create video content, Koehler made a wide range of custom looks on Adobe After Effects, as well as using content he created directly. He relied on LED Studio to configure the signals and Resolume Arena 6 for playback. “We created looks that highlighted the intricate structure of the rig,” he said. “We liked the way our video files tapered down kind of like an old steam train engine grill, so we wanted to play this up with our content.”

Warffuel was also pleased with the set’s configuration. “We elevated the performers and surrounded them with steep symmetrical intense patterns,” he said. In so doing, he, Kohler and their team drew attention to the masked DJs who are The White Panda, making them the center of attention — and the life of this floating EDM party. 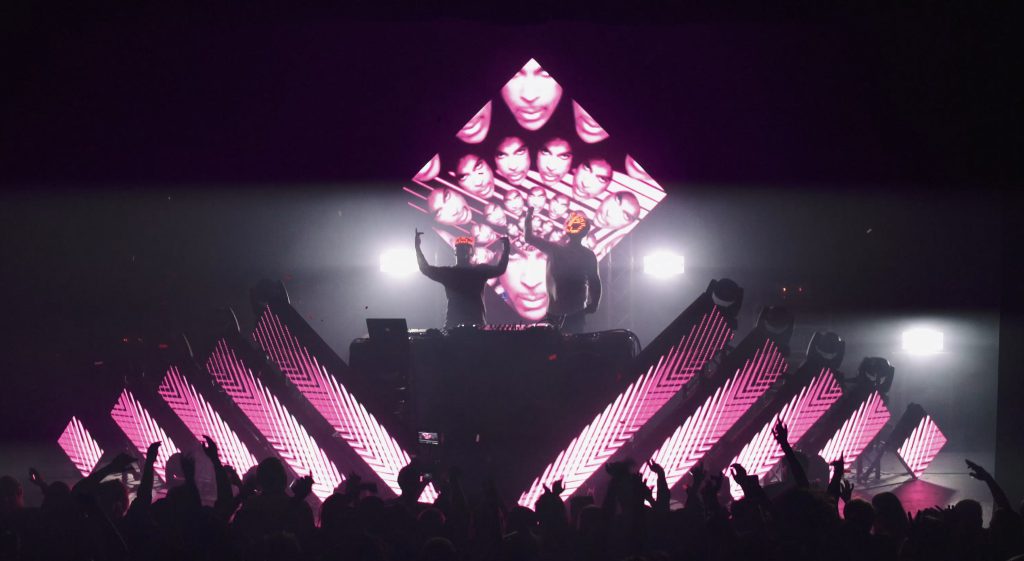