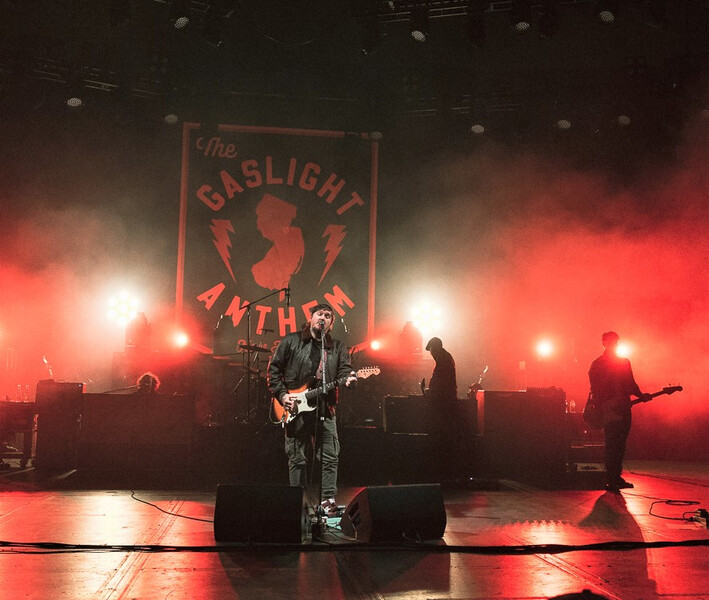 HOLMDEL, NJ – “Heaven looks a lot like New Jersey,” Jon Bon Jovi once said. His fellow Garden State rocker, The Gaslight Anthem frontman Brian Fallon, would likely agree with that description, and so too would the fans who filled the PNC Arts Center amphitheater on a blustery October night to hear the band from New Brunswick’s biggest local concert in eight years.

Standing center stage, Fallon declared his home state to be “the best place in the world,” as he and his bandmates proceeded to treat fans to a 21-song set that reflected the homegrown flavor of their signature sound. Reflecting this Jersey Rock fabric in light was a bold and powerful Matt Bodner design that featured fast-moving aerial effects, and a variety of bold color palettes, as well as plenty of audience lighting that, along with the glow of fire pits, illuminated the crowd.

Bodner, who lit the band on their summer tour, that culminated at the PNC Arts Center, beefed up his rig for this hometown show, with extra CHAUVET Professional fixtures from Squeek Lights. 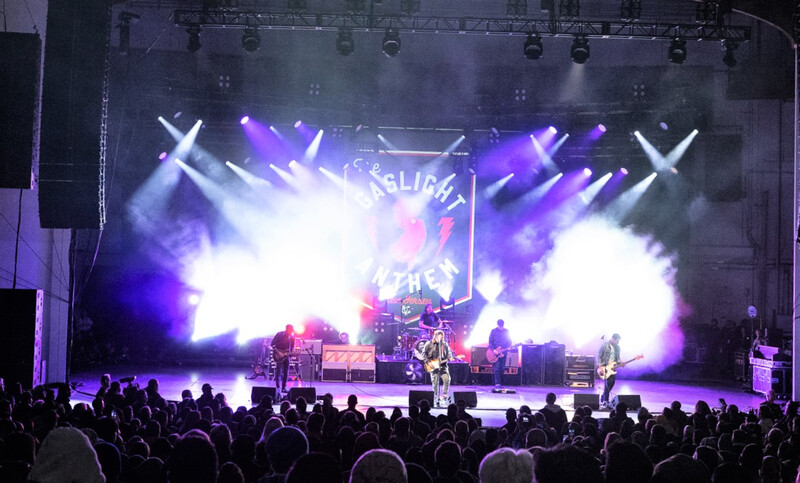 “I used Maverick 20 Force Spot fixtures, 26 Rogue R3 Washes, and 16 STRIKE Array 4 in the air,” said Bodner. “I designed the lighting plot for the fly package as well, using it for our shows Wembley Arena and Manchester Apollo in the UK. For this show, we added 14 Rogue R1 BeamWashes and another 18 STRIKE Array 4s, for a total of 32 blinders.”

Bodner favored color palettes that evoked the aura of the New Jersey shoreline as well as its complicated history when designing this show. “I wanted to communicate the feeling and ambience of New Jersey as much as I could,” he explained. “This led me to use a ton of cyan/magenta. When I listen to the songs, I picture the Jersy shore during its off season, with its overcast sky, winds coming off the ocean, and empty beach, except for a few stragglers. I complemented this with blue and red washes with cuts of yellow from the Force S Spots to evoke the summer shore with its carnival lights, 4th of July celebrations, and life on the boardwalk.

However, in addition to its beautiful shoreline, and music legends, from Frank Sinatra to Bruce Springsteen, New Jersey also has a complicated past. “The stage can be asymmetrical,” said Bodner. “We have a short season for tourists, and depending on which decade you remember most fondly, the history of our major cities like Newark, New Brunswick, and even Asbury Park, includes some desolate times, even though we’ve been on the mend since. I wanted to reflect the complete picture in my choice of colors. On the other side of the coin, in one song, “The Diamond Church Street Choir” we light the choruses in red and white in honor of the stage school, the Rutgers Scarlet Knights.” 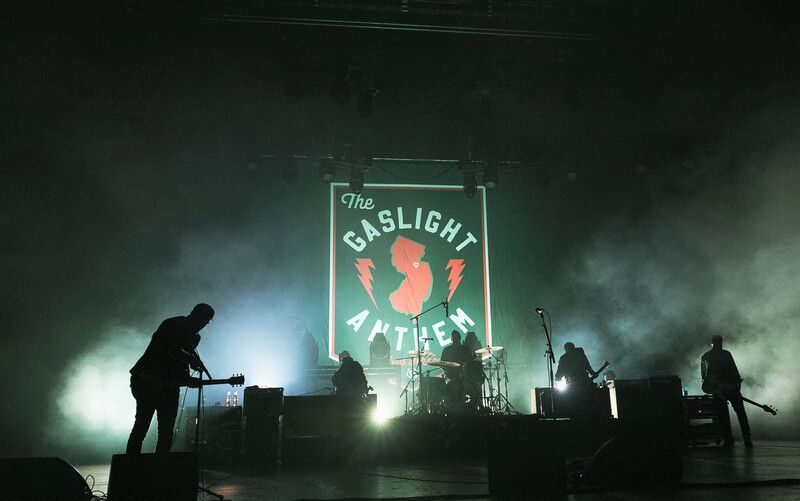 Running his show on a ChamSys Magic MQ 500M Stadium, Bodner created a continuous flow of fresh looks to engage the crowd with different images and reflect the various moods of the music. At times he broadened his design to cover the entire deck with washes and gobo patterns, while at other moments he tightened his looks and brought the focus to center stage.

“I placed all of my ground package upstage of the band, and saved movement FX for the big choruses and high impact parts,” he said. “Long movement transitions were utilized for the majority of the music. When it became time for Brian to take control of the room, I put some light on him and made all aware that the tone and section of the song was about to change.”

Although frontman Fallon was the focal point of many looks, Bodner ensured that the entire band received lighting love. Using the Rogue R3 Wash for front lighting on the fly rig, he zoomed in to create an ellipsoidal-like look that allowed every band member in addition to Fallon to have his own wash focus. “It was an artistic choice that the band loved,” explained Bodner. “Everybody has their day in the sun — Levine with his bass solo in ‘Old White Lincoln,’ Rosamillia in ‘Stay Viscous,’ and Bryan Haring with his keyboard solo in ‘Halloween.’” 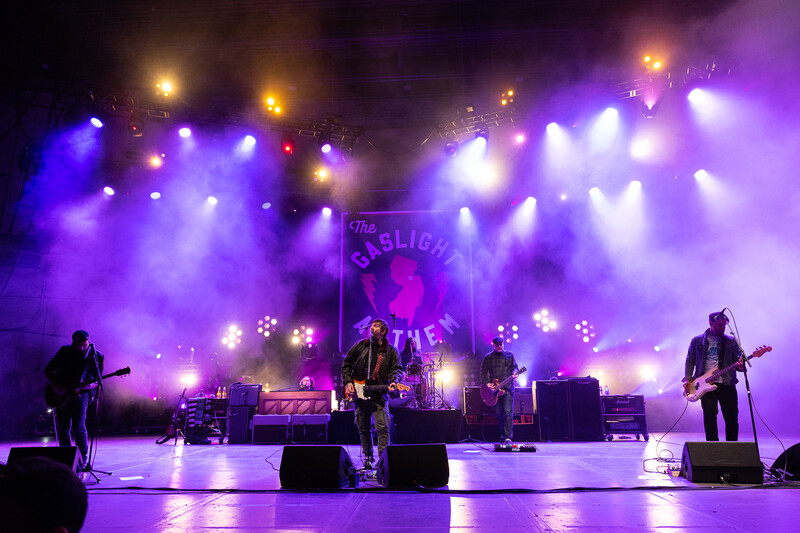 Crowd lighting remained in the forefront of Bodner’s mind during the entire show.
“I designed my ground package to dramatize the crowd participation the band brings to their concerts,” he said. “The crowd can be singing as loud as the band, and I wanted to make sure the guys on stage could see the impact they have brought to the genre and how defining their career is to their fans.”

The STRIKE Array 4 was critical in helping Bodner achieve his vision in crowd lighting. “This fixture is the best old-school incandescent blinder emulation I have ever used,” he said.

Also coming in for praise from this New Jersey born and bred designer was the Maverick Force S Spot. “Big shout out to Victor Zeiser of Squeek Lights for recommending this fixture for our tour,” he said. “When we played sheds during daylight, I was able to see the beams of the Force S Spot in most of the color spectrum. I kid you not, I could fine-tune positions during the day with the sun out.”

Just as the PNC Arts Center show represented a coming home for The Gaslight Anthem, it also represented a return to roots for the band’s lighting designer. Bodner began his career lighting for “Deal Casino,” a friend’s band that played local clubs in and around Asbury Park. By 2017, he was house LD at the city’s downtown club “House of Independents.” As it happened, Brian Fallon’s tour manager saw Bodner’s work at that club and asked him to go out with the band on the 2018 Reunion Tour… and so began another musical odyssey in New Jersey.