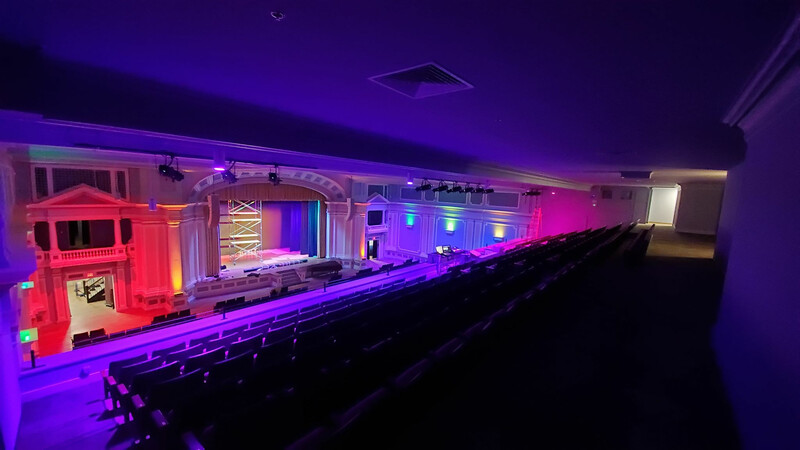 SPRINGFIELD, MA – Aedificatum Ut Lux Splendesceret, the words are Latin for “Erected That Light Might Become Brighter.” Chiseled on the central frieze over the entrance to the stately neoclassical structure on Springfield’s State Street, they glistened on the morning of February 15, 1926 when the building was dedicated as one of New England’s largest Masonic Temples.

Fast forward almost a century, and the hopeful phrase on the frieze has taken on new meaning. The building it marks, which had been abandoned and allowed to fall into disrepair, has now been reborn as the Springfield Conservatory of the Arts Magnet School, a place where hopes and dreams shine brightly.

In the building’s fifth-floor theatre, a different, more literal kind of light, is aiding students’ creative quests in the form of an advanced stage lighting system featuring Ovation LED fixtures by CHAUVET Professional.

Spencer Lavoie and his team at 4Life Entertainment designed and installed the new system using 28 Ovation B-565FC static washes, 15 Ovation E-930VW six-color ellipsoidals, and 15 Ovation H-605FC pendant house lights. The system is run with the help of the Net-X node.

Using this gear, Lavoie and his team have transformed the dormant 1,000-seat auditorium into a vibrant theatre and learning center. “Originally the engineering firm in charge of the property brought us on as theatrical consultants, but they asked us to stay and do the entire project from curtain motor rigging, to wall control,” he said. “Before we began there was no electricity, data cable, or rigging options in the room. We were responsible for designing electrical riser diagrams, and developing creative rigging solutions with our own team of engineers.”

Given the realities of the project and the demands that would be placed on the system once the magnet school opened, a color rendering LED lighting system was the clear choice, according to Lavoie. “By going with LED fixtures, we were able to spec a more realistically priced electrical plan that would allow us to support eight fixtures on one 15 15 circuit, which was a huge plus for bringing the fixture count up and staying within budget,” he explained. “Energy efficiency was also a factor as was the low heat generated by the units, since we hang some of the pendants low above the seats.”

The Ovation H-605FC pendants serve as the main source of illumination for the entire theatre. Evenly spaced throughout the room, the RGBA-Lime house lights are often used to immerse the audience in the show taking place on the stage. “They are very versatile,” said Lavoie. “Aside from serving as energy efficient house lights, they can also become a focal element of the show.”

Also immersing the room in color are the B-565FC washes. Positioned in custom made boxes on the walls as well as on the stage deck, the RGBA-Lime fixtures work in concert with the pendant units to create uniform colorscapes throughout the theatre. “We have eight of these washes per line set to create a fully balanced wash with three layers of separation between the borders,” said Lavoie. “Having some of them hidden in the boxes, creates a seamless effect, where you just see the color wash and not the fixtures.” 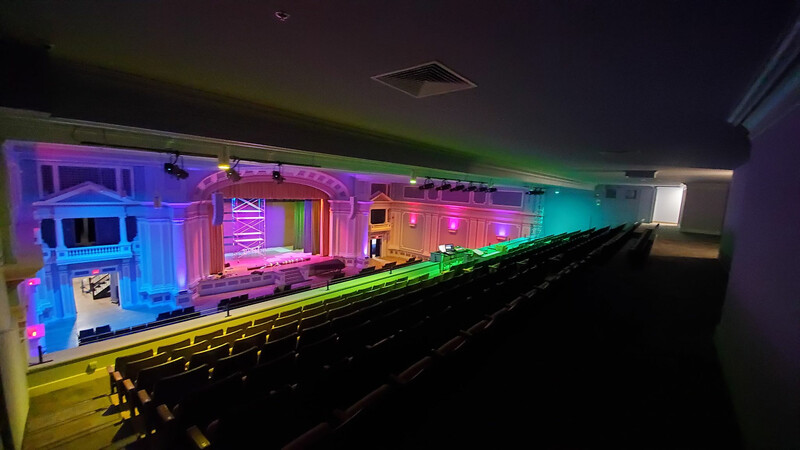 Providing key light and adding more color to the stage are the rig’s Ovation E-930VW ellipsoidal units. Drawing on the unit’s six-color engine, which includes red, orange-red, green, blue, royal blue and lime LEDs, designers working on productions at the school can create an array of hues to accent different moods and scenes.

“We hung the E-930VW about 80 feet from the stage above the balcony seat front,” said Lavoie. “Utilizing a custom-made bracket, we placed supports through the ceiling off of the I-beam structure. This gives us flexibility when positioning these fixtures.”

Hanging fixtures and running conduits was especially challenging in this project, given the nature of the building, which is on the National Registry of Historic Places. “There were quite a few regulations we had to deal with,” said Lavoie. “Plus, since the building is so old, there was cement under the plaster, which presented challenges, especially since the theatre starts on the fifth floor.”

Still, the rewards of being a part of this project made it well worth the effort. Lavoie recalls how he was inspired when he first saw teachers and students take over a newly remodeled space where ‘they could plant their garden of light.” So, it appears that the building’s original Latin inscription about light becoming brighter still rings true after all.