BUDAPEST – Rising 235 meters above the banks of the Danube, Gellért Hill offers breathtaking views of the Hungarian capital. This fall, it also provided an inspiring sight to the people in the city below when its iconic Liberty Statue was lit in rich, royal blues from eight CHAUVET Professional Maverick MK2 Spot fixtures positioned at its base.

Special Effects Ltd. illuminated the 14-meter tall bronze statue, which sits atop a 26-meter stone pedestal as part of #PowerOfLiveEvents, a social media campaign intended to raise awareness of the challenges faced by the live event industry during the COVID-19 pandemic.

“Our company was one of the driving forces behind #PowerOfLiveEvents, which has grown to involve over 170 tourism and events industry professionals from more than 25 countries,” said Andras Praksch, head of lighting at Special Effects Ltd. “The initiative was launched to draw attention to the issues facing our industry today and the importance of live events to the fabric of our society. It’s our hope that people in even more countries will become a part of this campaign.” 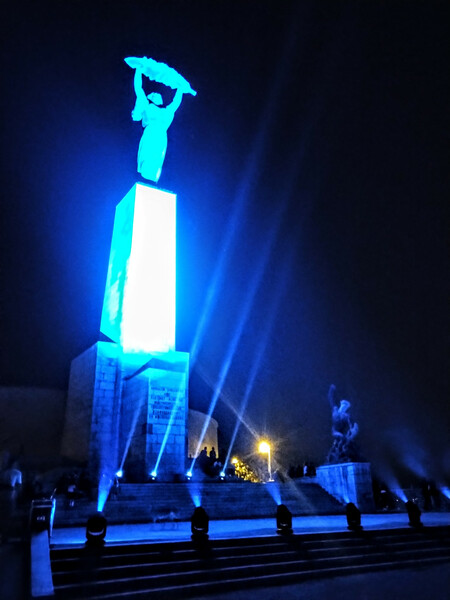 Praksch had the Maverick MK2 Spot fixtures positioned the ground at the Statue Plaza about 18 meters from the base on the monument. Drawing on the 440-watt LED fixture’s tight beam angle and robust output, he had no difficulty achieving the throw distance to reach the head of the bronze leaf-holding figure on top of the monument.

“For us, the MK2 Spot was an easy choice,” said Praksch. “To begin with it has a very good light output along with excellent zoom and focus optics. We of course, also like the really nice color filters. Last but not least, since these fixtures have LED light sources, we didn’t need too much electric power.”

In lighting the Liberty Statue, the campaign’s organizers chose a powerful symbol for their message. Aside from its prominent profile overlooking Budapest, the monument, which is called “Szabadság-szobor” in Hungarian has been a symbol of freedom throughout Hungry and much of Europe.

Created by noted Hungarian sculptor Zsigmond Kisfaludi Strobl in the immediate aftermath of World War II, the monument commemorated the liberation of Hungry and the hope of its people to live freely.

Today, almost 75-years later, the same desire still burns brightly in the hearts of Hungarians, as they strive to assert their freedom, not from tyranny, but in the face of a pandemic. The brilliant blue light that shines on the Liberty Statue sends a message to all that they will prevail.