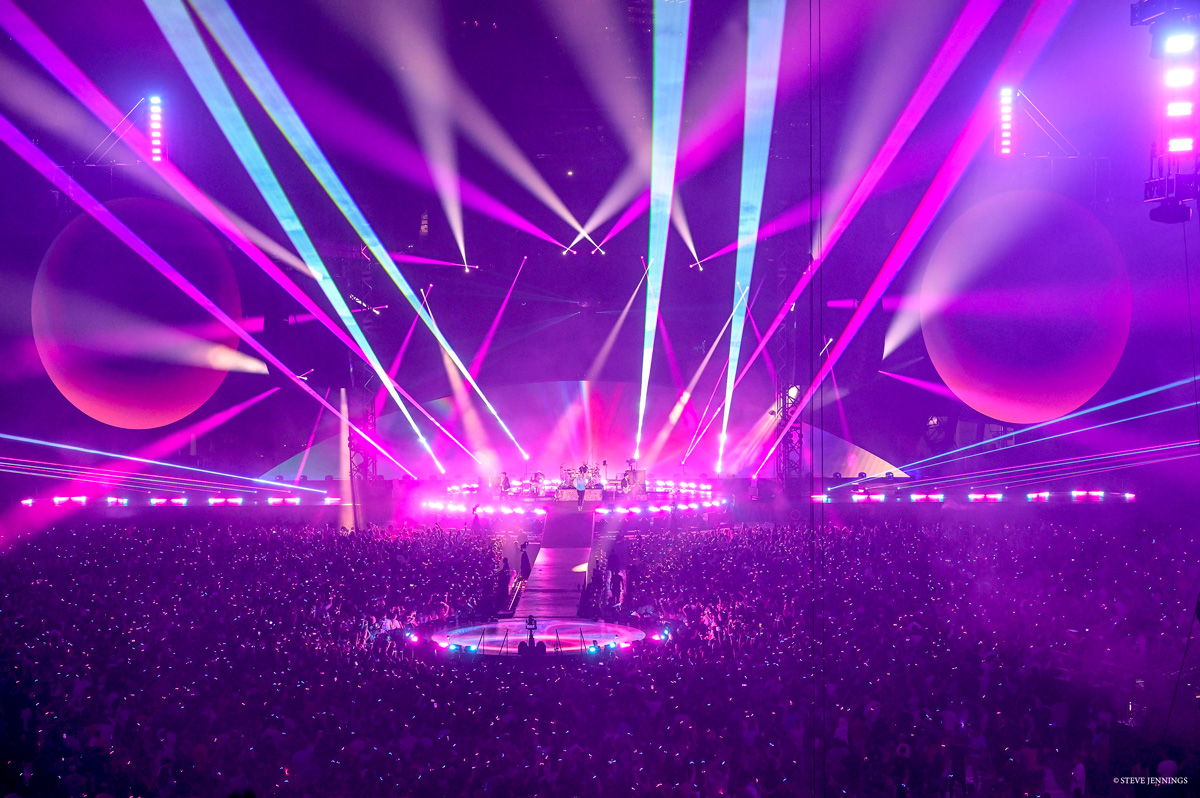 Gazing up at the sky from the banks of the Mediterranean, Pythagoras felt a mystical harmony resonating through the heavens as the sun and moon, joined the stars and planets floating through their celestial orbits. ‘There is music in the spacing of the spheres,” the Ionian Greek mathematician and philosopher declared, articulating his vision with a series of formulas and geometric patterns.

Today, over 25 centuries later, his insights into the beautiful interplay between visual patterns and music is being celebrated in Coldplay’s global “Music of the Spheres” tour, in which the superstar band’s performance is being supported by a stunning and transcendent production design by Misty Buckley and Phil Harvey.

Inspired by Pythagoras’ writings and diagrams, the stage design evokes the great thinker’s vision with unfolding spherical patterns extending out from the stage in multiple directions. Accentuating this panorama, and endowing it with even greater moving power is a Sooner Routhier lighting design that features 192 of our Color STRIKE M fixtures. 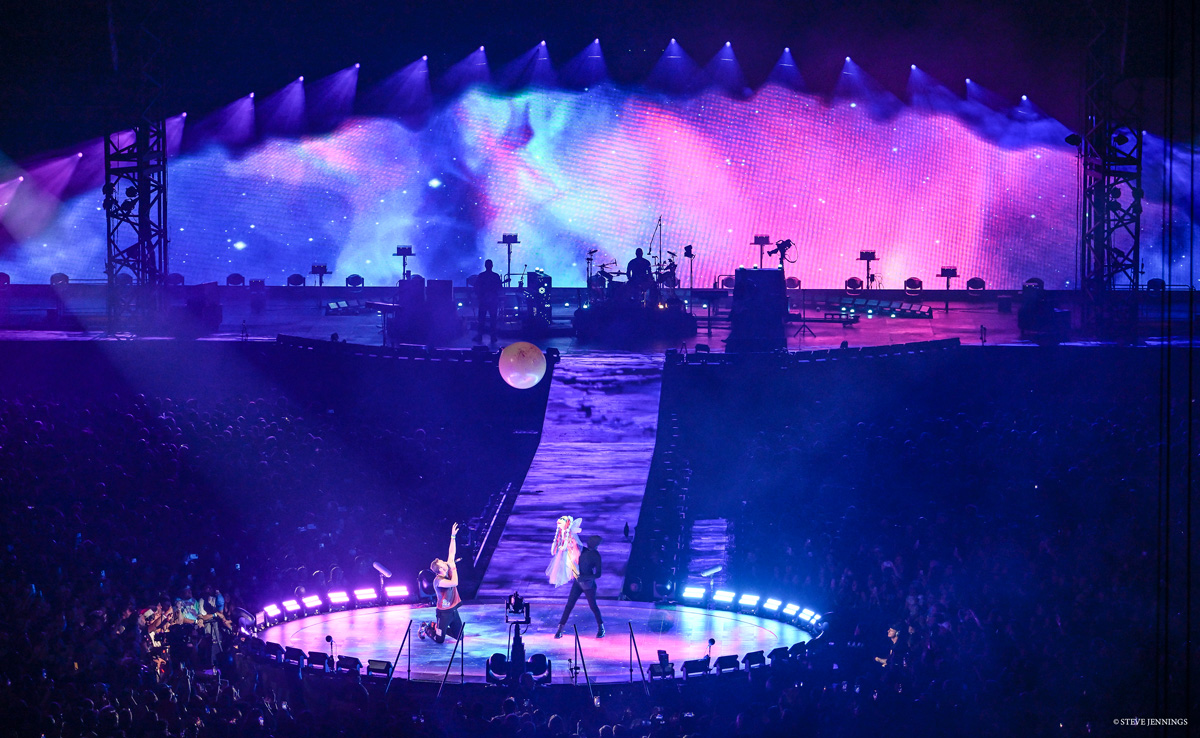 Supplied by Upstaging, our IP65-rated motorized blinder/washes are suspended from pylons on either side of the stage and on audience PA towers, in addition to being arranged in circular configurations on the decks of the main stage and Stage B.

“There’s a specific Pythagoras diagram that displays the arcs and movement of the solar system and its celestial bodies that we leaned on for inspiration,” Routhier said of the overall design concept. “So, the architecture for the lighting design, and the cuing of the system is heavily based on spheres, circles and arcs. Matt Geasey of Clear All Visuals did much of the tech development, drafting, and pre viz integration, relating to these concepts, including for our lighting system.”

Routhier’s lighting design highlights the stage’s geometric patterns with flowing movements that add to the orbital sense of the show. The motion of the light flows seamlessly with the music, with flourishes such as arches rise rhythmically from the upstage deck, while the horizontal streams of light moved out from it. Her design also creates evocative moods reminiscent of a transformative journey through the imaginative use of color contrasts and strobing effects. 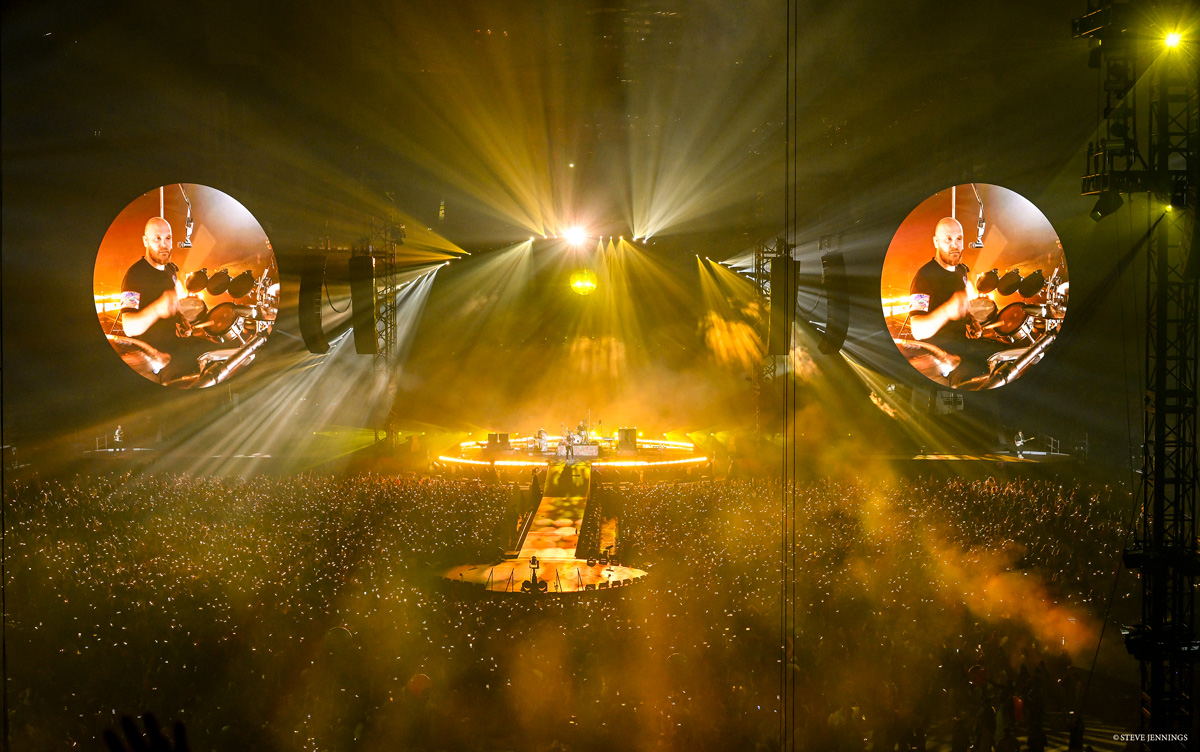 The versatility of the Color STRIKE M, which features high output pixel mappable tubes flanked by RGB banks of LEDs (also pixel mappable), was key to helping her achieved some of these memorable looks.

“We did a lot of very unique things with these fixtures, “ said Routhier. “The song ‘Clocks’ was very special. There are moments in that song when we pull front lighting out completely and silhouette the band against the video wall using the STRIKE Ms. This works dramatically with the massive green laser that comes out of the apex of the arc video wall. Most all the other lights are off during that song.

“I also love the rainbows in ‘Adventure of a Lifetime,’ especially the rainbow we get with the STRIKE Ms,” continued Routhier. “I enjoy playing with all the colors in our cuing. Coldplay seems to be all about rainbows, which is an absolute blast! Chris Martin wanted the feeling that the audience is moving through the seven levels of chakra from the top of the show to the finale. We followed it loosely using the chakra colors in order, but pairing them with something complementary. Sometimes we sway from the chakra order as certain songs have very specific identities. However, if you pay close enough attention, you can see that the show flows in order – red, orange, yellow, green, blue, violet…. and so on. “ 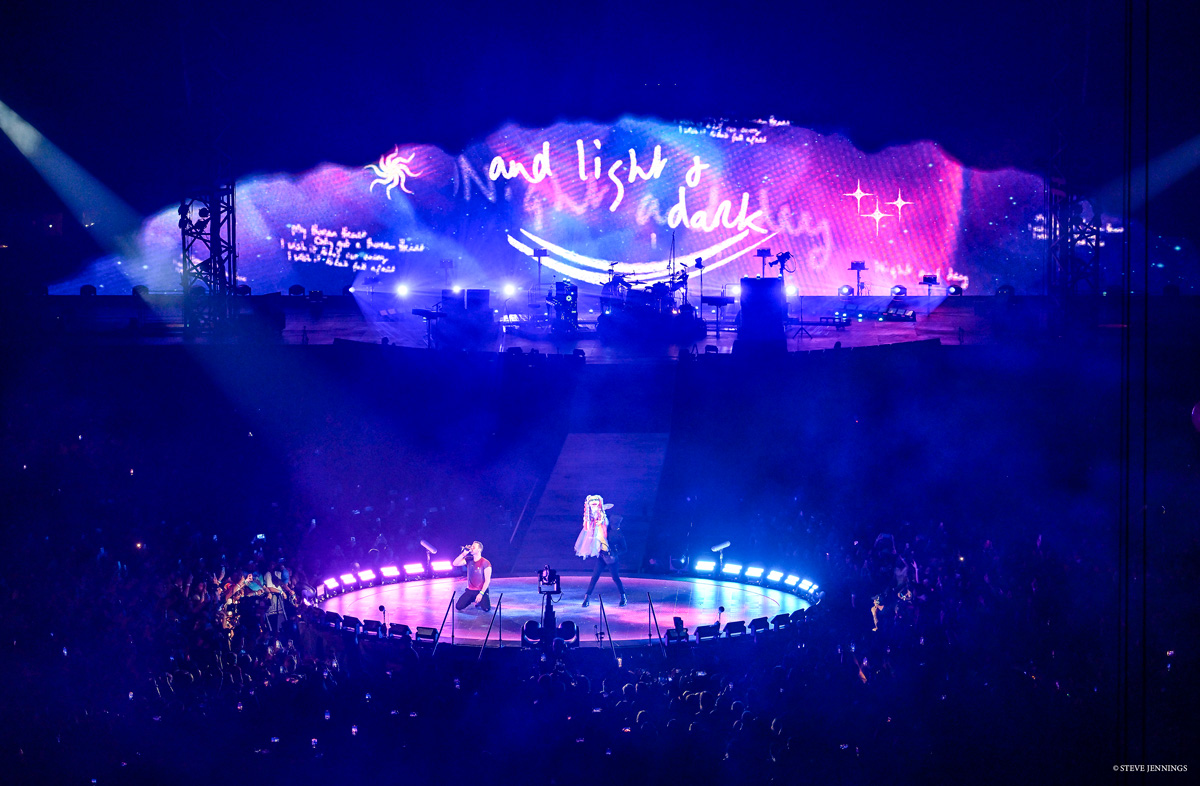 The pixel mapping prowess of the Color STRIKE M helped the design team come up with a variety of mood-setting ambience looks for songs such as “Beautiful,” when lighting programmers Joe Lott and Matt Kemp of Quantum Creative used the fixtures to create colorful fluttering motions of aqua and pink against back colors of teal, green and UV.

“We relied on the Color Strikes to give us a lot of pixels to manipulate,” said Lott. “Having such a large quantity of units in close proximity gives us a really dynamic surface to create the show’s looks and effects. The circular aura of Strike M fixtures around the band is key to giving the stage it’s shape. With the high density of pixels, it allows us to achieve smooth gradients of colour and light wrapping around the band; and with over 8,000 pixels in total we can create very different patterns and shapes giving each song its own identity. 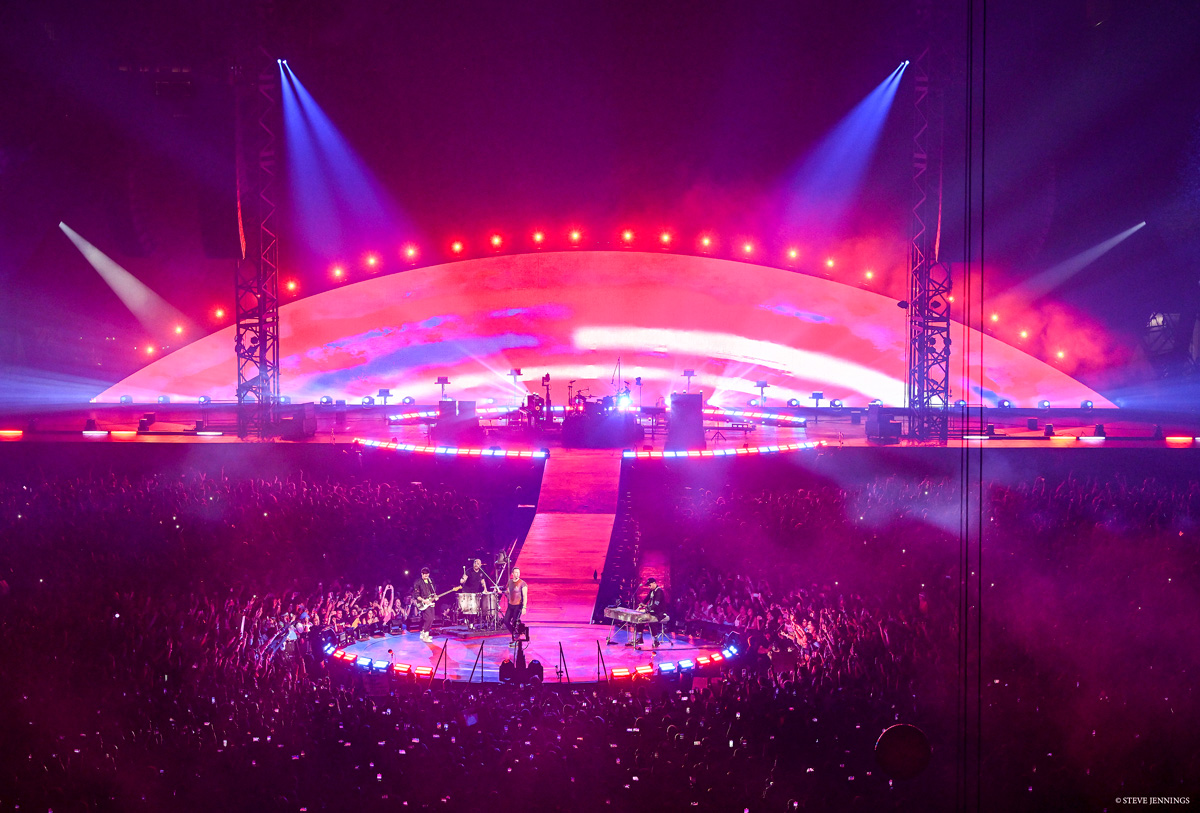 “The amount of light output from these fixtures is seriously impressive,” continued Lott. “When we turned the audience lights on for the first time in South America we were able to light up the entire stadium in color in a way I’ve not seen before. The song ‘People Of The Pride’ makes great use of how bright the Strike Ms are by allowing us to strobe the entire stadium in bright white light.’

Intense audience lighting is instrumental in connecting Coldplay to fans on the tour, agrees lighting operator Shaheem Litchmore. “Audience interaction and connection are such a major part of our show,” he said. “When Chris is on stage and says ‘I can see you,’ it sparks a powerful shared moment with fans.”

Going back and forth between the band and the audience, this link results in a circle of connectivity encompassing everyone on stage, and in the arena — exactly the sort of spherical harmony that would have been music to Pythagoras’ ears. 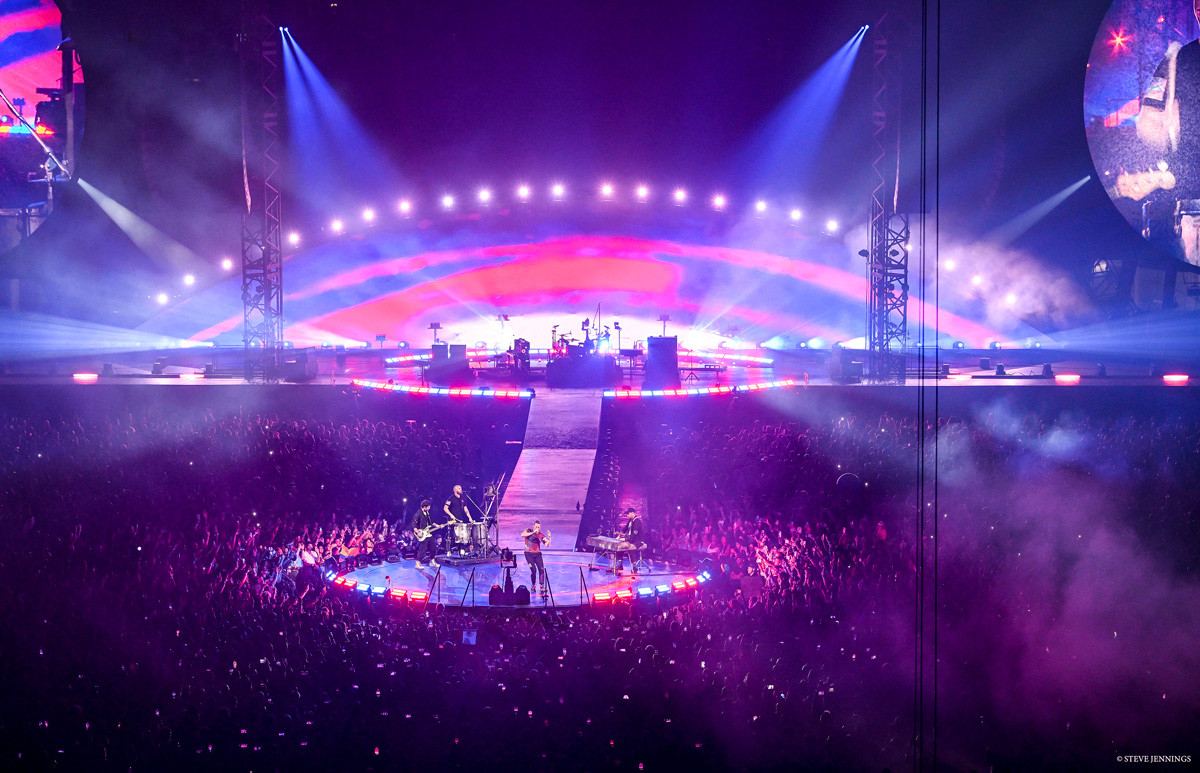