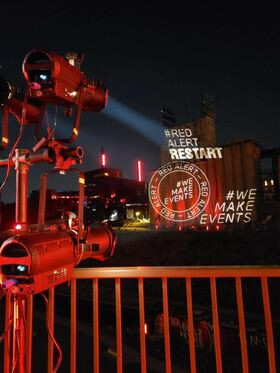 MINNEAPOLIS, MN –  Every June, the historic Stone Arch Bridge bustles with the sights and sounds of the three-day music and arts festival named in its honor. But like so many other events that bring people together to celebrate their communities, the one at the former railroad-bridge-turned-pedestrian-way fell silent this summer in the wake of the pandemic.

Ironically, the event site at the majestic bridge over the Mississippi, touched the people of Minneapolis again on the evening of September 1, not with the rhythm of drums and clang of guitars, but by serving as a platform for a dramatic Red Alert display that reminded everyone of the toll the lockdown has taken on those who make occasions like the Stone Arch Festival possible.

Seth Scott, owner of Monkey Wrench Productions, led the team responsible for the compelling display. Positioning three CHAUVET Professional Ovation E-260WW ellipsoidals on vertical pipes, two units on the upper level and one below, he directed projections at the famous grain elevators on the Mill City Museum halfway across the Mississippi River.

The ellipsoidal on the lower level was used to project “# We Make Events” on the building, while the two top units projected the Red Alerts logo and the words “Red Alerts Restart.” With their crisp white lettering standing out sharply against the deep red coloring of the grain silos, the projections made an undeniably powerful statement. Complementing this image were the red lights on the tower of the Guthrie Theatre, just to the side of the museum

For his gobo projections on the museum, Scott used 14ﹾ Ovation lens tubes. With these lenses, the three fixtures projected the gobos 500-feet over the Mississippi. “Some people would use a 5ﹾ or 10ﹾ lens for this type of long-distance throw application,” he said. “However, the 14ﹾ Ovation lenses provide a much crisper image, and they’re brighter to boot.”

With no power available on the bridge, Scott had to rely on a generator to run his Ovation units as well as the mix of over 190 CHAUVET Professional WELL Fit and CHAUVET DJ Freedom Par fixtures that were used for uplighting. “We are a DeWalt tool family on our systems side, so the choice was simple,” he said. “DeWalt has a portable power station that allows you to use four batteries to get a 120V 15amp circuit. We used that with four 6-amp hour batteries and got a little under two hours of run time out of each set of batteries.”

Scott was able to meet the challenges of lighting the museum from the bridge with the help of his team, which included 40 volunteers, as well as the Legacy Production Group, Big Event Productions, Infinitree Media, and Henley Audio. Together, they used this landmark, which has woven its way so deeply into the fabric of life in the Twin Cities, to remind their community of the situation faced by neighbors who quietly work behind the scenes at the events that enrich everyone’s life. 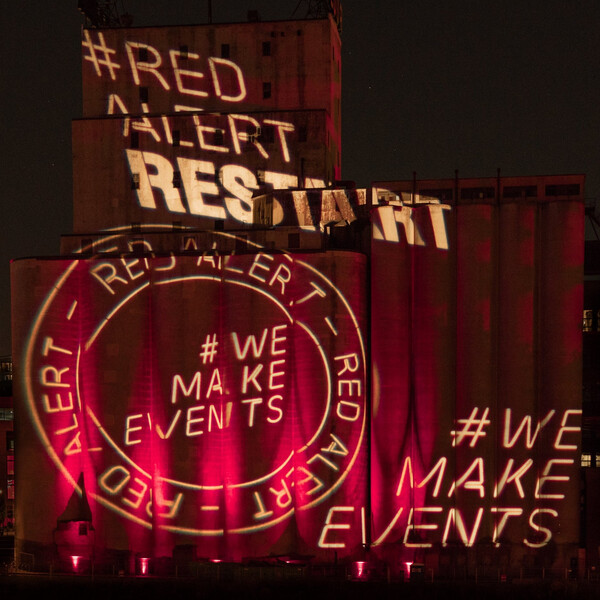