Early in his career (and theirs), this Pittsburgh-based designer toured with GWAR as their LD. Still on the brink of stardom, the future metal icons and multi-Grammy nominees made extra money by opening for themselves under a different name — something they were able to do since they performed in costume. Lighting both “groups,” Warner would climb a ladder between the acts, switch out some gels, and move a few fixtures around to give his main client a new look. His ingenuity hasn’t slowed down since.

Obstacles seem to have little impact on Warner, who learned the value of resourcefulness from his days lighting garage bands in his hometown. Back then, he had to be adept at working with the tools at hand to make his clients feel like they were about to arrive. Some of them like GWAR did. So too did their ingenious LD, who has gone on to design for an incredibly broad range of platinum recording artists from Smokey Robinson, The Indigo Girls and The Goo Goo Dolls, to Everclear, The Pussycat Dolls and Icona Pop.

Regardless of his client’s genre or generation, Warner has remained true to his initial creed to light for the music, not the effect. Even in his largest arena shows, he avoids unnecessary over the top flash, opting instead to support his clients with a more creative and intuitive use of the fixtures in his rig. Speaking to us from his Karate Pinky studio in Pennsylvania, he shared his insights on ingenuity in design.

We have to begin by asking where does the Karate Pinky name come from? What does it mean?
“Gilligan’s Island. Mr. Howell hits Gilligan in the neck and says ‘you hurt my Karate Pinky!’ Also, my niece is nicknamed Pinky and my nephew enjoys taking karate lessons.”

We’ve been impressed by how you always seem to light for the music rather than just using an effect because it’s new, or cool, or different. Can you talk to us about that?
“Funny you noticed that. When I first started using moving lights on tours, I stayed away from all of the constant non-stop movement of fixtures. Just because a light can move, doesn’t mean it has to. That’s just my opinion. I think I go a few songs into the Stone Sour set until the first real movement. Gobos are another effect that can be used far too much.”

So, how do you see the role of a lighting designer vis-à-vis music?
“My job is not to distract the audience from watching the band they’re paying to see. My job is to enhance their experience.”

Does this philosophy come from how you got started, lighting garage bands? Did this affect your views of lighting design?
“I had to learn how to make a few lights look as big as possible. I remember the band X-Cops (which was basically the band GWAR) open for themselves. After they were done, I’d climb up a ladder and change as many gels as I could so GWAR would have a different look. Ingenuity is important in lighting design.”

On the subject of music, you’ve lit an extraordinarily wide range of artists for alternative and metal to all-time great singers like Smokey Robinson. How does it differ lighting for someone like Smokey compared to Stone Sour?
“It’s really all the same. It’s just individual artist’s preferences, and how you use the effects in your fixtures. For example, with Smokey I put a bright spotlight on him, highlight solos, use gobos, and no strobes. With Stone Sour, I light each band member equally when possible, have a few gobos, and use strobes. I use the same primary colors for both acts. One specific change I made was with American Idol Winner David Cook. I told Dave that I wanted to go darker, away from spotlights, and use a good deal of back lighting. I wanted to shake off the Idol image of the big, grand, production. He was all for it.” 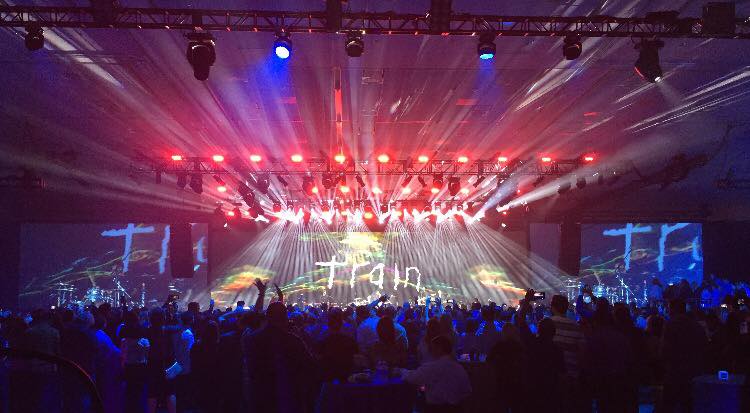 You’re from Pittsburgh and live there now rather than a lighting mecca like New York, LA or Nashville. Why? Does this influence your work?
“I did live in LA for awhile when I got the Everclear tour. But all of the touring gigs I had lined up afterwards had nothing to do with living in LA, so, I moved to Texas for a change of scenery. Eventually, I met my wife in Hong Kong and decided to move back where my friends are at. I love the city and our great sports scene. As far as work in Pittsburgh for me, I might as well live on a remote island. LOL”

We know Pat Monahan from Train is from nearby Erie. Did this play a role in you hooking up with Train?
“I did my first stint with Train in 2003-2004. I got the job from their SM who was from Pittsburgh. I did talk to Pat and we talked about our Pennsylvania ties. I came back in 2016 as a fill-in and Pat remembered me and was very nice. Heck of a voice on that guy.”

Even though you’ve reached the upper level of your profession, you still always seem willing to add new unknown acts to your client list. Why is that?
“If you take on a new client that has been around and has had multiple LDs before you, you can either get constantly critiqued that you aren’t the same as the guy they fired, or they have a huge entourage telling you they want more strobes during a part that doesn’t call for strobes or use certain colors that you don’t feel works with a song. I think the quote from the Untouchables says it best, ‘If you’re afraid of getting a rotten apple, don’t go to the barrel. Get it off the tree.’”

Programming has also seemed to become a specialty all onto itself. What are your thoughts on that?
“I do all my own programming. Am I great at it? Average. Am I satisfied that I can program my show and that my clients like what I’m doing? Yes. That being said, I can name a great deal of programmers that are so good that it depresses me. Without mentioning names, I had a talk with a pretty big musician, and he asked me who designed and programmed my show. When he found out that I was the director, programmer, and designer, he replied ‘Why do I have to pay two other people?’”

What do you like to design in?
“Google Sketch-up, Photoshop, and Cinema 4D. My vendors handle the Vectorworks stuff.”

What’s the first thing you do when you take on a new tour lighting design project?
“Mow the grass or go for a long drive. It’s strange, I get to a point when I see the artist performing in my head and after I determine in my head what fixtures I need to see, I put it all to paper.” 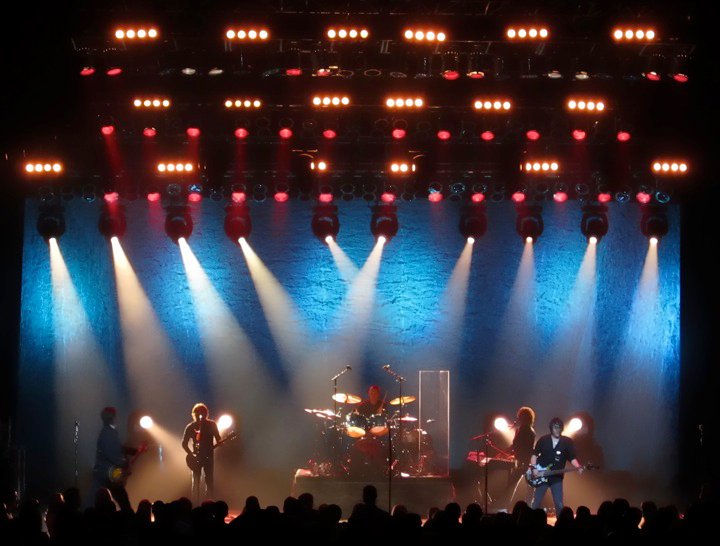 In your work for alternative bands, you’ve done a lot of cool things with backlighting. What role do you see backlighting playing in touring designs?
“Backlighting is my favorite type of lighting and I’ve been fortunate enough to work with the right kind of acts where back lighting is appropriate.”

Why do you like backlighting?
“I like it because it looks sinister in some way. I’d backlight Smokey Robinson sometimes at the end of the song while he had his arm up, and the audience would respond enthusiastically. Bad Religion had a song called ‘Atomic Garden.’ The UV drop would go from the album cover to the band’s logo. I’d do all backlighting, and I had a par for each guy in 156 chocolate glowing on their faces at 10 percent or so. That was my favorite part of the show. On the flipside, Pussycat Dolls – hardly no backlighting at all. I think from the rock audience perspective, backlighting may be the closest they’ve come to seeing something theatrical.”

Do you have a favorite and least favorite color to use in lighting?
“Back in the day I’d use 027 red but would be given 106 instead, so I guess 106 is my least favorite.”

You’ve done shows all over the world. Do you have a favorite venue?
“For theaters, it’s the Warfield in San Francisco. For arenas, it’s Manchester Arena in England. In terms of cool places, it’s the Pirita Convent in Estonia.”

Looking back over your career is there one job that stands out as a learning experience, good or bad?
“I hate to mention an act by name, but one client was a singer who’s in a really well-known band, but right before our first show it took a huge amount of effort for me to walk across the street to do the show. The vibe was very negative. My first lighting client was a local Pittsburgh band called The Affordable Floors. They let me do my own thing and never got in the way. They helped mold my creativity.”

What are your views on audience lighting? How and when is it most effective?
“I think we all do it a bit more than we’d like. Personally, as a fan back before I started lighting, I loved being lit up while in the crowd. I try to remember that when my client calls for heavy crowd lighting. I never strobe the crowd though.”

How did you get started in lighting?
“I wanted to go to Berklee after high school but wasn’t a good enough guitar player. The school didn’t say that, I just was honest with myself. I went to recording school in Ohio and got a job in a recording studio as well as doing live sound. Doing sound for a local band at the old 9:30 club, I was asked if I had a card from the house engineer. I told him that I’d rather do lights, and he hired me for GWAR. That was 1993. I still did sound occasionally (The Wallflowers and Matthew Sweet were my last clients) but I started to get more work as a LD.”

Who were the big influencers in your career?
“Influencers…Kiss (for making me want to be one of the guys at FOH) Roy Bennett, Marc Brickman, Howard Ungerleider, Peter Morse… and too many more to mention.”

What stands out to you as the highlights of your career?
“Starting with the Pussycat Dolls when they were an opening act and then moving on to selling out multiple dates in arenas. Being involved with a creation of a lighting fixture that was used by other LDs. Playing at the arena where I saw my first concert, which was Kiss at Pittsburgh Civic Arena.”

How would you like to be remembered as a lighting designer?
“As a nice, creative guy who made each of his clients look different from each other.” 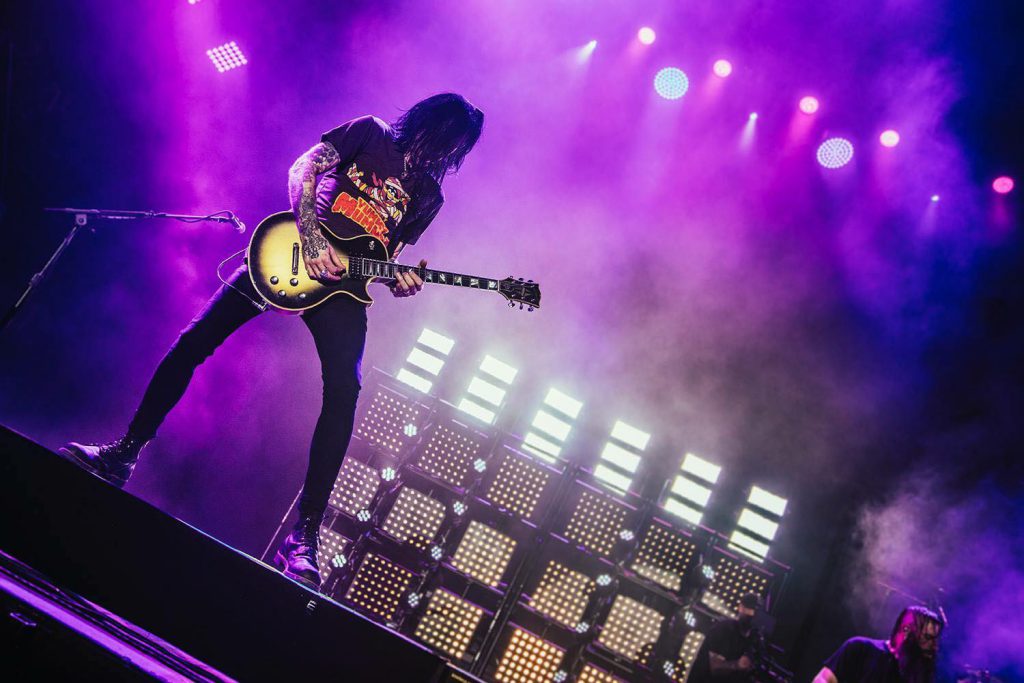