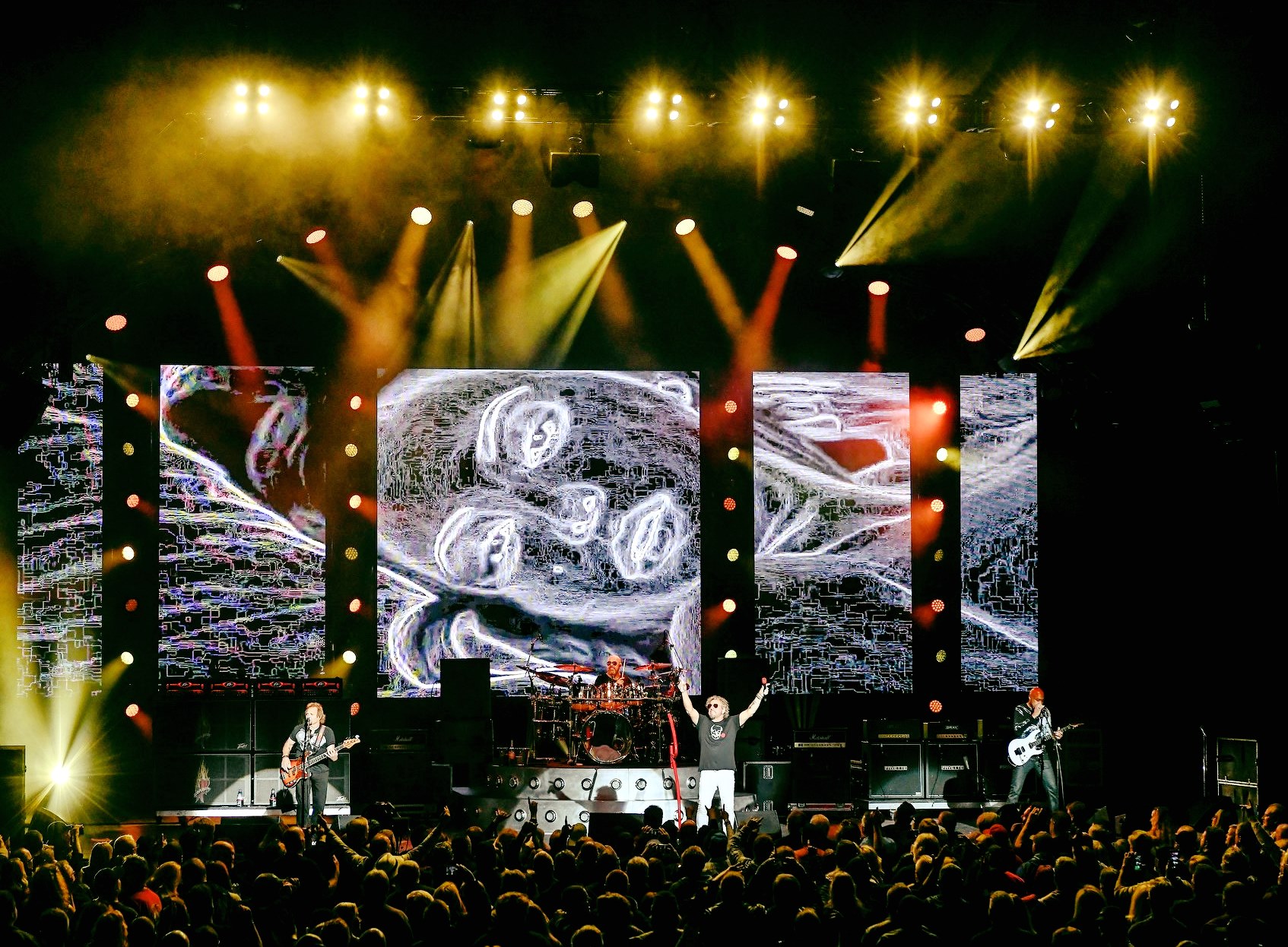 MILL VALLEY, CA – There’s Only One Way To Rock, so declares Rock-and-Roll Hall of Famer Sammy Hagar in one of the many hits he recorded over the course of his storied career. That “way,” at least as practiced by the irrepressible Red Rocker himself, involves slamming the pedal not only to, but also through, the metal and embracing the moment with the ferocity of a wild tiger.


Matt Mills of Touch Light & Media enjoyed this kind of exhilarating ride recently when running the lighting and video for the USA tour by Hagar and his band The Circle in support of their current Top Ten album Space Between. With him at every turn of this wild journey was a collection of CHAUVET Professional STRIKE 4 fixtures, supplied by Felix Lighting.

“This was the first tour I’ve done in over five years (since Avenged Sevenfold) that was not locked into time code,” said Mills, who co-designed the two-hour show with Production Manager Alastair Watson and also served as its lighting director, as well as lighting and video programmer. “It was a blast rocking the show live. The guys changed things up every night, so they kept me on my toes.”

Helping Mills keep pace were the eight STRIKE 4 fixtures he flew on downstage truss. The high-output fixtures were positioned at different angles, so the warm white light from their 100W COB LEDs covered a wide section of the audience at the tour’s amphitheater stops.

Mills relied on the fixtures for audience lighting throughout the show. This not only immersed entire venues in the performance, it also underscored the connection between the legendary superstar and his fans. Beyond their role in illuminating the crowd, the versatile fixtures were also used to change up looks during the show.

“I started out using the STRIKE units as normal four-light blinders early in the show, then once we got a few songs in I brought them to life by using their strobe functions,” said Mills who had 25 songs programmed, in addition to maintaining an extensive punt page. “These fixtures gave me a lot of great opportunities to accent different moments on the fly with sudden bursts of light.”

The warm white light of the STRIKE 4 fixtures also helped Mills create a mellow look for Hagar’s softer songs, as well as the more classic numbers from the superstar’s four-decade catalog of hits. Evoking images of incandescent fades, the STRIKE 4 fixture’s smooth dimming curve added another timeless element to the show.

Also helping to make things click on the tour, which ended in June, was the compact size of the STRIKE 4 relative to its output. This allowed fewer fixtures to be included in the rig, saving precious trailer space. “We had only two trucks,” said Mills. “So, we had to be very space conscious.”

The tour may have “traveled light,” but like all things involving Sammy Hagar, it was packed full of energy and great music, which on this go-round was supported by an equally exuberant lightshow.