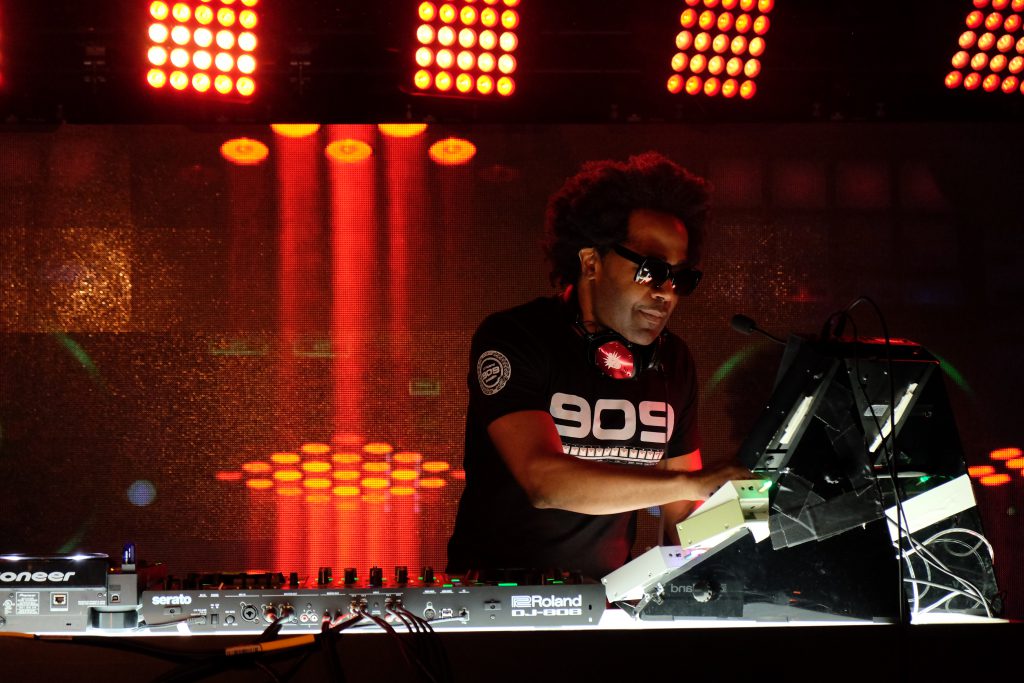 NEW YORK – Groundbreaking products call for an innovative marketing approach, which is precisely what Roland, a company known for redefining standards in digital music products, delivered with its “909 Day Celebration.” A nonstop 24-hour straight live streamed marathon with feeds from around the world, the widely anticipated event, saw the unveiling of 30 new Roland and Boss products, including synthesizers, digital keyboards, DJ mixers, percussion video switchers, amplifiers and effects.

“The concept of 909 Day is ‘The Future Redefined,’” said the event’s lighting designer Justin Preston of Three-Phase Productions. “For the Live Stage we needed something that could look both traditional as well as embrace the futuristic aspects of the brand. For the Piano Stage, a stripped down, more classic approach seemed appropriate. Then with the DJ Stage, we really wanted to emulate the eye candy-laden looks similar to what you’ll see at Ultra and Electric Daisy Carnival.”

A good thing about the CHAUVET Professional fixtures, says Preston, is that they gave him the flexibility to create a wide array of fresh futuristic looks on stage without having a lot of space or time at his disposal. This versatility was especially important given the large number of artists who participated in the 909 Day Celebration.

“Because of the vast number of acts on the Live Stage, I was concerned about getting enough unique looks for each artist,” said Preston. “I wanted to make sure we could create really powerful looks that reflected the personality of each act on the Live Stage. The Rogue R1 FX-B fixtures really helped with that. We hung them pointing straight towards the audience, so I was able to use them vertically, horizontally, and at an angle. Those different focus positions, along with the unique number of pan/tilt effects of the FX-B, helped create different looks for each act.” 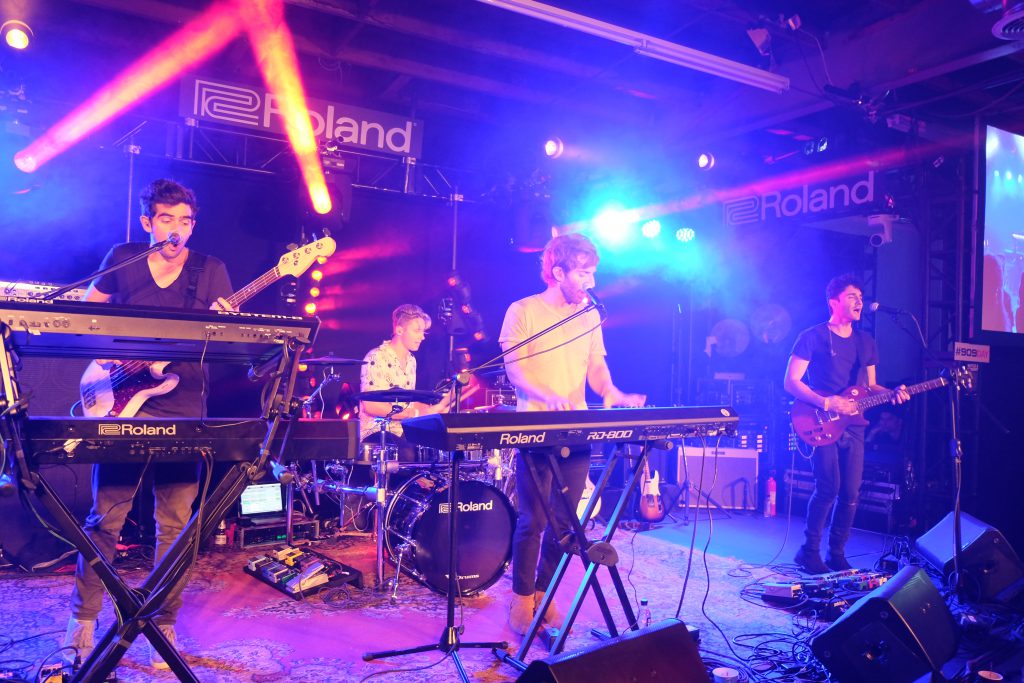 Preston was part of a team that included Three-Phase Production President Darren Rezowalli, assistant lighting director Will Chandler, rigger Daniel Zawolkow, and show ME Matt Johns; as well as electricians Garrett Kelly, Jack Herndon, Jensen Chambers, Alex Ashley and Juan Carlos Amaya. He credits the entire team with meeting the production challenges involved in lighting this event, which had all three stages located in a single room and run off one lighting console and one media server.

“This event was constantly moving, and the set times were very short,” said Preston. “Unlike what you’ll find at most concerts or festivals, the artists at the 909 Day Celebration are playing one or two songs — and there are a lot of different elements to their shows. Juggling the desire to create an intricate show vs. running a clean show was a concern. In addition there needed to be enough light for departments to realistically complete changeovers on non-active stages without drawing focus from the active stage.”

Since the event was live streamed globally, Preston also had to be mindful of how his lighting would look on camera. In addition to the Rogue R1 FX-B, other fixtures in the rig helped him create camera-ready looks at a nonstop pace.

“The RH1 Hybrids were very versatile. I was impressed by not only their intensity, but also their color selection,” said Preston. “I often find myself disappointed by the options in color wheel fixtures, but that was not the case with the RH1 Hybrids. The R2 Washes are fixtures we own and love. We find them to be bright, have good color, little flair, and all in a manageable form factor. A good thing about the Next NXT-1 is just like the FX-B fixtures, they let you use both DMX and ArtNet simultaneously.”

Preston used six Rogue R2 Wash fixtures as back light and three Rogue RH1 Hybrid fixtures for aerial beams on the Live Stage, in addition to having the nine Rogue R1 FX-B fixtures on vertical pipes yoked towards the audience as a backdrop. On the Piano Stage, he used two Rogue R1 Wash fixtures, two Rogue RH1 Hybrids on upstage deck corners for texture and two Rogue R2 Washes for overhead specials. For the DJ Stage he used eight NXT-1 fixtures in a horseshoe shape around the back truss, and two NXT-1 fixtures on the deck. “Roland really wanted a mini rave – something that you could see at Ultra — for this stage,” he said. “The pixel mapping functionality of the NXT-1 fit the look we were going for, while the tight beam angle of the LEDs looked great on camera.”

Held on September 9th, the 909 Day Celebration is named in honor of Roland’s iconic TR-909 drum machine. The introduction of the TR-909 33 years ago represented a seminal moment in the history of digital music. Although the original TR-909 was phased out years ago, it has been followed by an impressive series of innovative products, 30 of which were introduced at this year’s event, where they were illuminated by LED fixtures that reflect the same kind of commitment to staying on technology’s cutting edge. 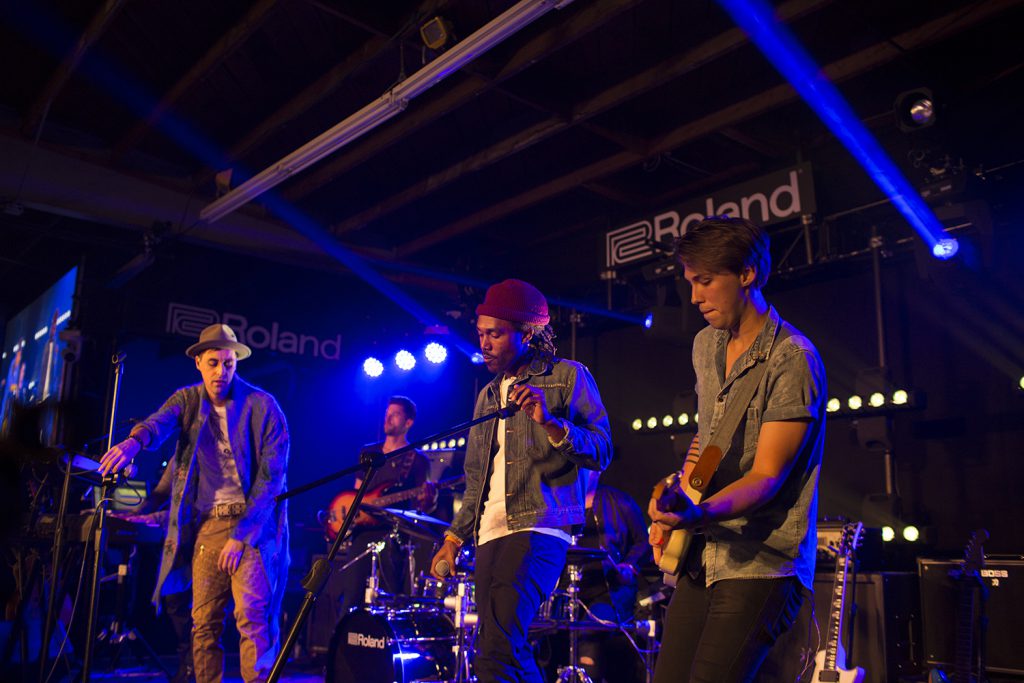