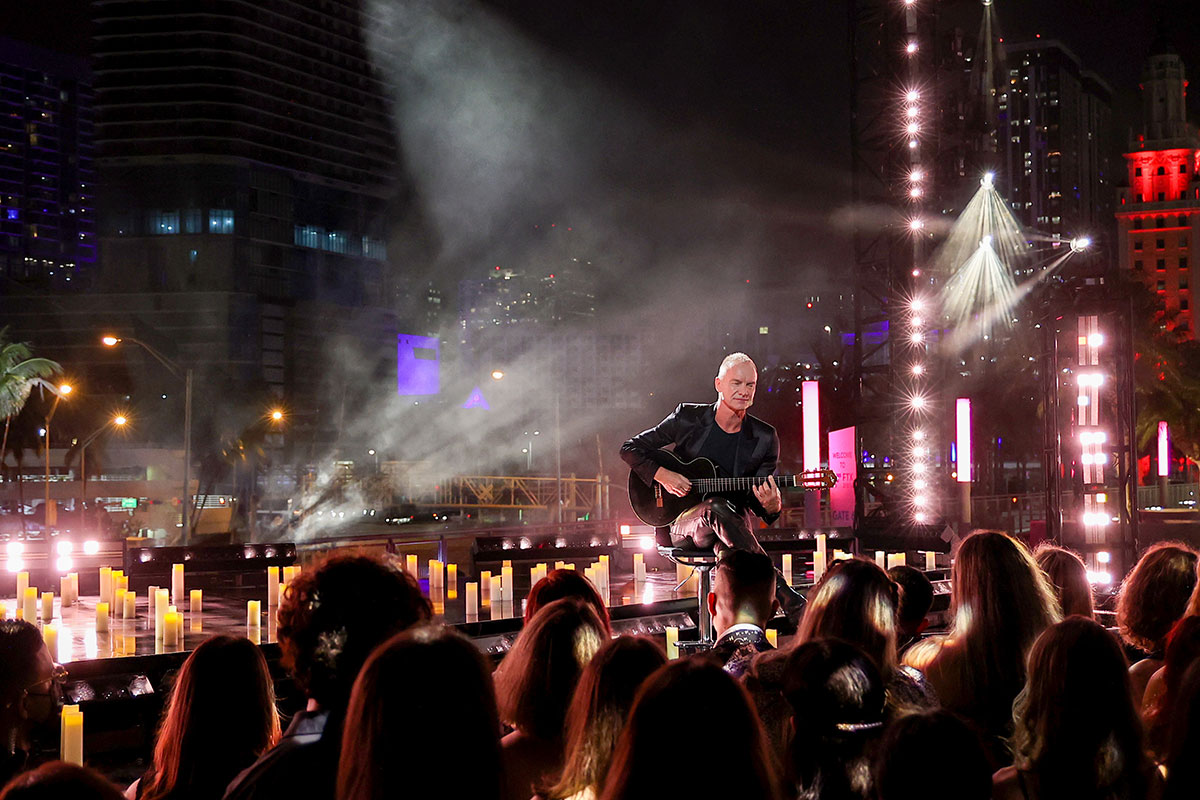 MIAMI – I enjoy the music of the language,” 17-time Grammy winner Sting said of Spanish. “It’s an emotional quality that it gives me.”

That emotional quality was there for all to enjoy on the evening of  Thursday, February 24, when the English-born legend performed his single “For Her Love” in Spanish as part of Univision’s broadcast of the 2022 Premio Lo Nuestro awards.

Taking to the South Plaza Stage outside the FTX Arena, acoustic guitar in hand, Sting tapped into a wellspring of heartfelt feelings, singing in a voice that was clear and soft, yet powerful.  Adding to the moment were his surroundings on the angular, asymmetrical stage with its warm lighting and the city of Miami skyline in the background. 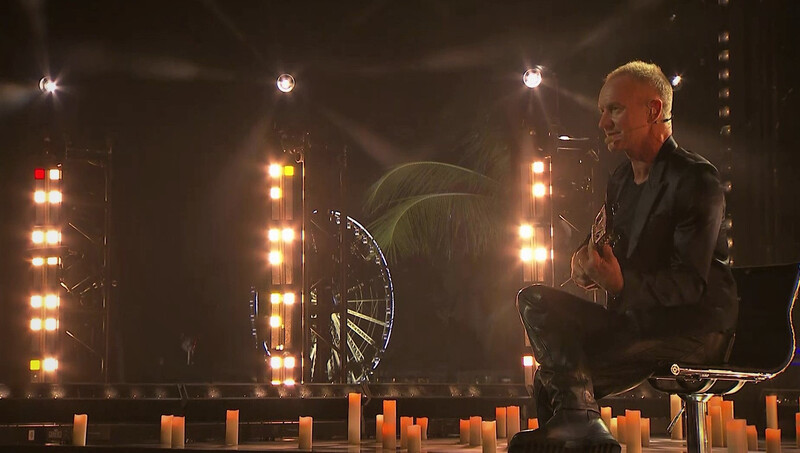 For Rene Garcia, it was one of the highlights of the show. “I  grew up listening to the music of  Sting,” he said. “So seeing this was very special to me personally.”

Garcia’s interest was more than that of a fan. Working with Chris Fernandez of  Limitless Design, he was the lighting designer for the four performances on the South Plaza stage, including the one by Sting.  Helping him create the evocative looks that contributed so much to the mood of the evening was a collection of 145 CHAUVET Professional IP65 rated fixtures, including the new Color STRIKE M, all supplied by 4Wall Entertainment.

“We shot different segments over a few days in Miami, so the weather is always a concern,” said Garcia. “However with the fixtures being IP65 rated, our team could go ahead and focus on the creative aspect of our job without worrying about rain.” 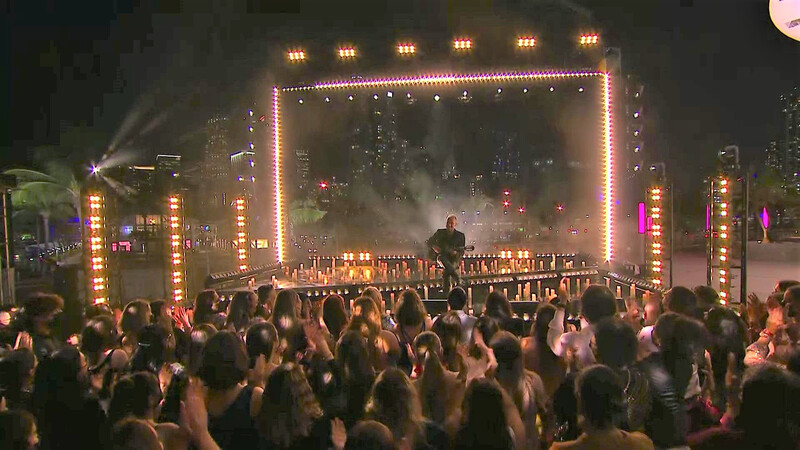 Regarding those creative aspects, Garcia and Fernandez had to compensate for a relative lack of upstage room. This mandated that they create a great deal of side lighting to help the shots from the Steadicam and other hand-held cameras for the Univision broadcast. It also meant that they would have to position fixtures discretely, keeping them largely out of sight; but at the same time, they didn’t want to compromise lighting coverage.

The 54 Color STRIKE M fixtures in their rig were critical in helping them meet this challenge. Garcia and Fernandez positioned the motorized strobe/wash fixtures on six vertical truss structures, located three apiece to either side of the stage, as well as on the upstage floor and overhead upstage truss.

Drawing on the fixture’s unique design, which has an ultra-bright white tube surrounded by a color-mixing pixel-mappable face, they had it perform a variety of functions in their show: covering wide shots as well as side angle ones, creating overhead strobing effects, and serving as the foundation for camera-pleasing eye candy flourishes. Varying looks, they had the fixtures output light in color some moments, then relied solely on the white center tops at other points.

“The pixel mapping and strobing capabilities of these fixtures are very impressive,” said Garcia. “Plus,  it has wonderful vibrant colors that come off beautifully on television. Chris and I worked long days ahead of the show on previz at the 4Wall Shop here in Miami with Sebastian and Omar in order to make the different varied looks for each artist.

“Uji Fulgueira our Executive Producer at Univision was a big help in this process, thanks to all her guidance and dedication,” continued Garcia. “Our crew: Ivan Sanchez, Rommer Matute, George Coronel, Arthur Uria, and Richard Padron were also crucial in  helping us achieve the variety and balance that this design required.”

While creating vibrant looks for the performers on stage and the live audience, the design team had to be mindful of their broadcast parameters by choosing camera-friendly colors and balancing key lighting follow spots to 4800 Kelvin. 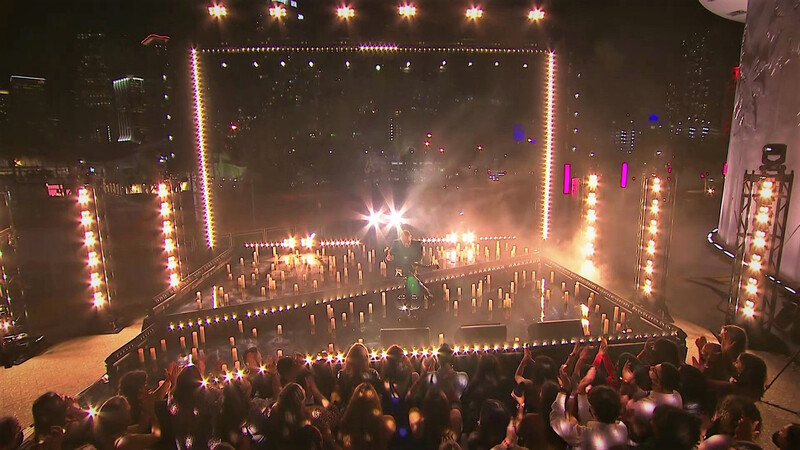 They also had to be sure that their lighting did not detract from the Miami skyline background. The 56 COLORado PXL Bar 16 and 12 PXL Bar 8 fixtures in their rig, along with its 23 COLORado Solo Batten units helped in this regard, being used to create a frame for the skyline and performers on stage. Thanks to the tilting and pixel-mapping features of the PLX battens, they were able to create a wide variety of looks on this frame, adding an extra level of interest to the show.

“Our framing really pulled everything together,” said Garcia, noting that it was “magical” to have a famous skyline woven into a stage’s backdrop – especially so when an iconic signer was on that stage performing some of his first songs in Spanish.