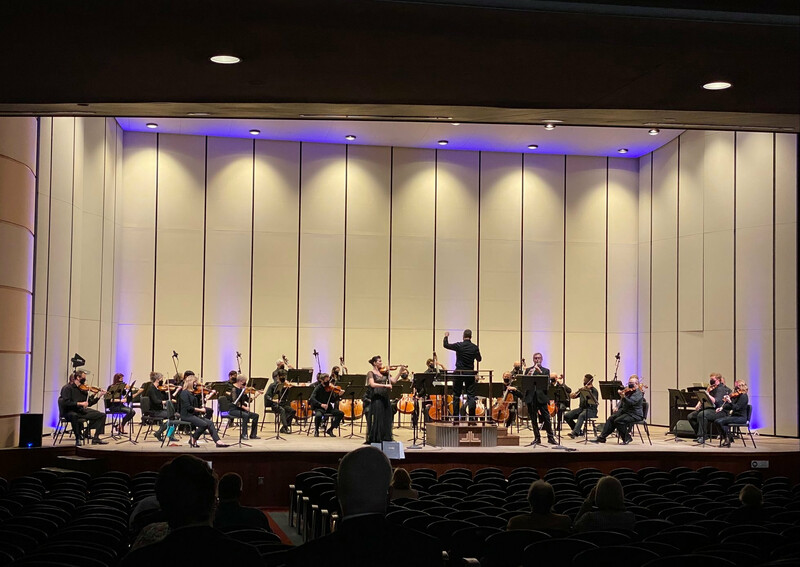 AUGUSTA, GA – Livestream concerts are not just for rock. The Augusta Symphony demonstrated that in spirited fashion recently with its A Little Night of Music, a pay-per-view Friday night show that drew an enthusiastic response from music lovers throughout its market.

Taking place at the historic Miller Theatre in downtown Augusta, the livestream performance followed strict social distancing guideless. A very limited crowd was allowed to buy tickets for the performance in the spacious venue; and there was no intermission during the show to minimize contact. The orchestra itself was reimagined to include a smaller number of musicians on stage, led by Music Director Dirk Meyer, and featuring principal violinist Anastasia Petrunina, oboist Brian Lyons, and trumpeter Brian Winegardner.

Despite the limited number of musicians, the livestream show encompassed a bold and diverse musical mix representing different eras, from the baroque (Bach’s Concerto for Violin and Oboe) to the modern (Claire Assad’s 2008 Impressions Suite). A range of styles was also featured in the livestream, including Mozart’s gentle “Eine Kleine Nachtmusic,” which inspired the program’s “A Little Night Music” name, to Beethoven’s thunderous “Eroica.”

Supporting this far-ranging musical mix was a versatile lighting design by Cliff Smith of Quest Sound & Productions that drew on the flexibility of the CHAUVET Professional fixtures in the Miller Theatre’s recently installed lighting rig.

Part of the theatre’s $23 million renovation in 2018, the new lighting, system, which includes Ovation, Rogue and STRIKE fixtures installed by Bandit Lites with input from Rob Boggs, Production Manager of Miller Theatre. The new system was put together with the idea of having something with the flexibility needed to support the diverse range of programs, both musical and nonmusical, that take place at the 80-year-old theatre.

For the A Little Night of Music livestream, Smith relied heavily on the rig’s Ovation E-260WW ellipsoidals with 26° lens tubes to provide smooth even fields of light across the entire stage. Maintaining this consistency was especially important, given the larger than usual amount of empty space on the stage because of the relatively small number of musicians.

Also contributing to the engaging looks of the livestream were six Rogue R2 Wash fixtures. Positioned downstage, the RGBW moving fixture added a variety accent colors to the stage, which translated well on camera as they reflected the many different moods of the performance.

The Rogue R2 Wash fixtures also served to complement the clouds that were used as design elements in the broadcast. “Anytime we use something like clouds, we want to balance it with light,” said Boggs. “With their vivid colors, the Rogues served this function perfectly.”

With their wide 12° to 49° zoom range, the Rogue fixtures also made it easy for Smith to reflect the varied mix of music by changing the look of his downstage lighting. Flowing note for note with the orchestra’s performance the lighting provided audiences with an enriching experience. In so doing, they served as a reminder that livestreams can flourish with every kind of music.