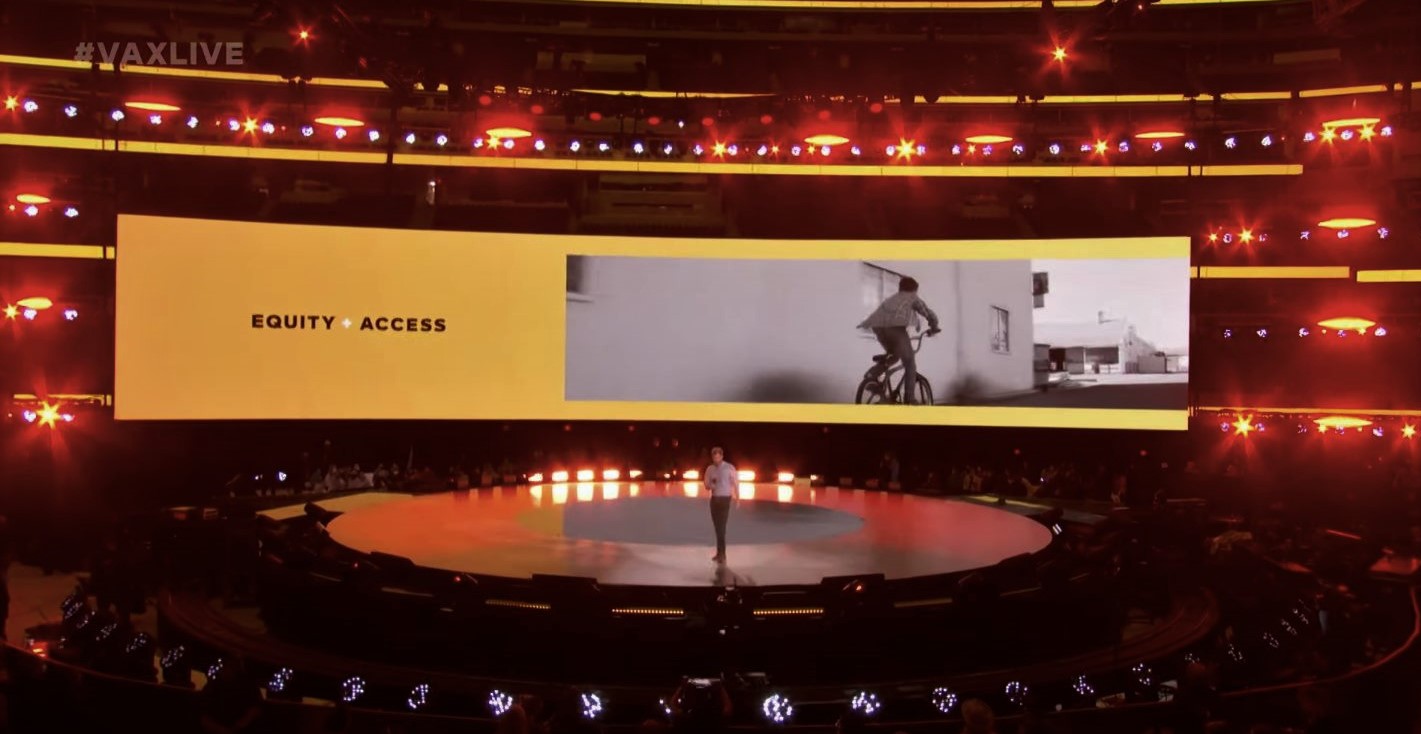 Asked to describe his impression of Global Citizen’s Vax Live, The Concert To Reunite The World, Tom Kenny answers with a simple six-word phrase, “Full of Grace, Full of Light.” The globally televised event, which raised $302 million, enough to procure 26 million doses of the COVID-19 vaccine, was certainly all of that.

There was the grace that arose from the inspired words of world leaders sent to the event via remote video, and from the impassioned live performances by artists like Jennifer Lopez, who brought her mother on stage to join her in a heartfelt plea to ensure the equitable distribution of the vaccine needed to fight the pandemic

As for the light, Kenny and the Diversified Productions Services team ensured that it was present in full force at SoFi Stadium, supporting the performances of Lopez and fellow stars Eddie Vedder, Foo Fighters, J Balvin, and H.E.R. with a rich variety of dynamic looks that reflected each artist’s individual style. 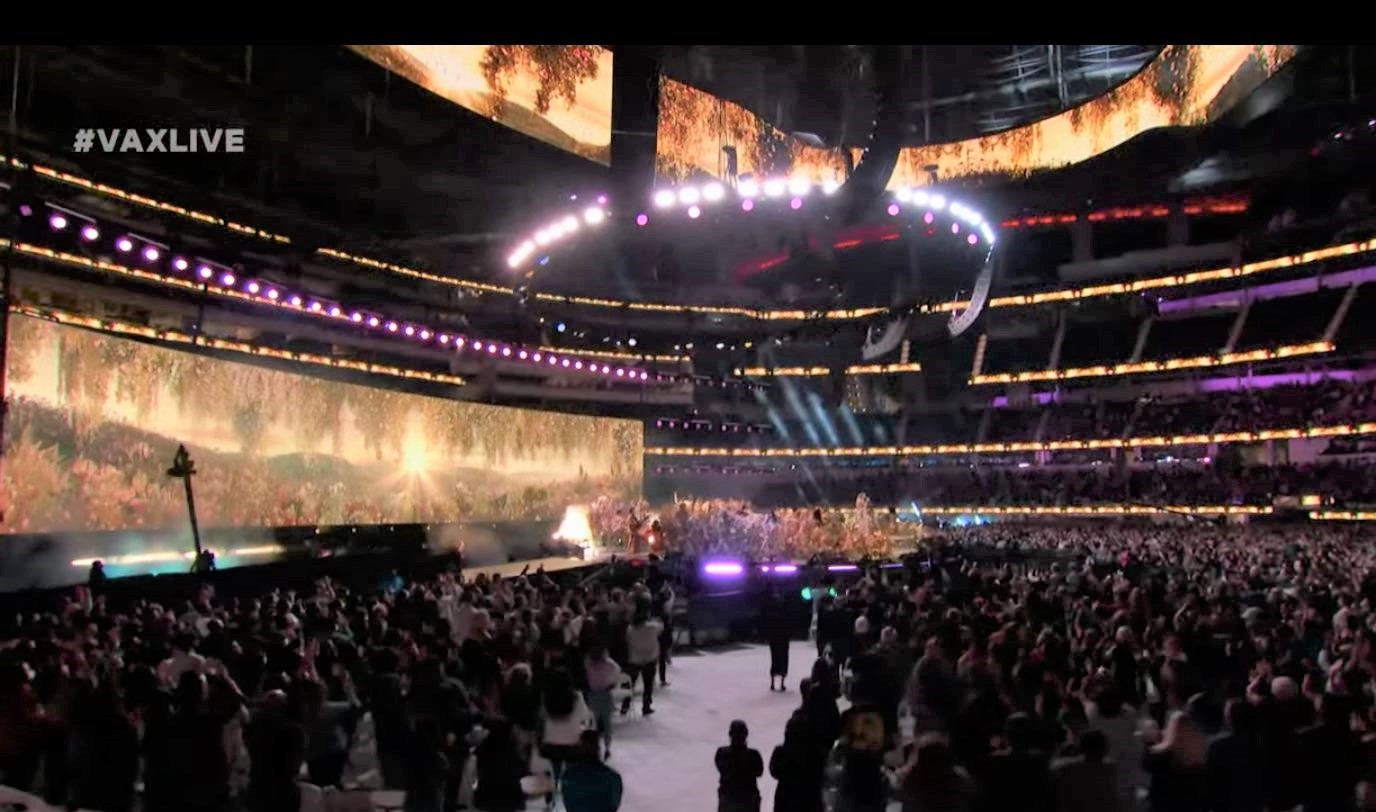 “I wanted this to feel like a concert, not a television show,” said Kenny, the event’s lighting designer. “All of us involved, the artists as well as the entire crew, were thrilled to be working a live show again, and I wanted to our design to express this feeling. We didn’t have a massive budget, but we had massive light.”

Helping to provide this voluminous level of light for Kenny’s design were 281 Maverick MK3 Washes, supplied by 4Wall Entertainment. Kenny arranged our RGBW moving fixtures on a circular truss above the stage, along a curved wall behind it, and on the floor in the area separating the performers from the audience.

“Because of safety protocols, we had to leave 20-feet between the stage and the first row of the audience,” he said. “We decided to put Mavericks on the floor in that space and shoot the light straight up, which created a great concert feel for those in attendance, while coming off very well on camera.” 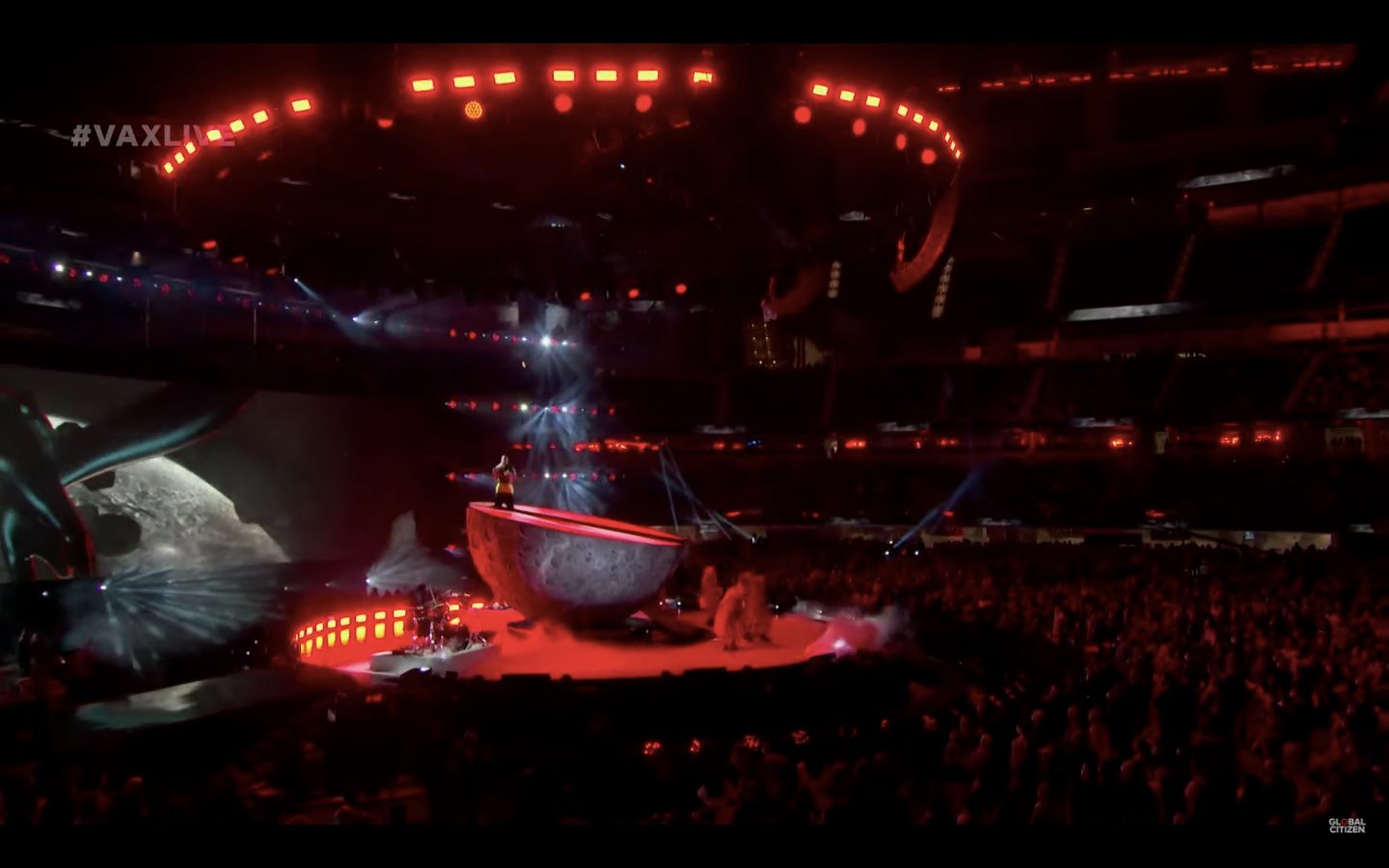 The circular stage with its curved backdrop and video wall were reflective of the concert’s mission. “A red circle, as in the letter ‘O,’ is the symbol of Global Citizens,” said Kenny. “Plus, there is an embracing sense conveyed by a circle; it’s like putting your arms around someone. So I was envisioning making curves and circles key elements in the design as was our set designer Tamlyn Wright. The rounded stage provided a lot of great camera angles, all of which we supported with light.”

Kenny’s lighting design also had to support a varied mix of artists on stage. Although he strove to create concert looks, the demands he faced were somewhat different from those encountered in a tour. Instead of one headliner, there were many; and instead of performing two-hour sets, these stars were on for much shorter periods of time.

“We lit quite a few different styles,” said Kenny. “First was Jennifer Lopez who was all gracious and warm with her mother on stage. Then we had an artsy vibe for J Balvin, a punk one for Eddie Vedder, and the pure rock of the Foo Fighters. We programmed a lot of intricate cues for J Lo and busked for the Foos, who continued performing for the pure fun of it even after the broadcast ended.

“Jason Uchita, Mark Butts, and Erin Anderson, our lighting directors and programmers, along with the rest of our crew did an excellent job managing all the different demands made on them,” continued Kenny. “Our rig also had to be nimble to handle everything. The Mavericks are very responsive. Being LED, they gave us a great deal of flexibility. I think going forward on tours, I will be looking to go all LED, the entire rig.”

According to Kenny, the Maverick MK3 Wash, which is powered by 27 40W Osram LEDs delivered more than enough output for his show. “They are perfectly well-suited for a stadium of this size (70,000 seats),” he said of the fixtures. “We ran them at 50-percent most of the show. They stood up very well to our bright video wall (run at 10-percent), so we were able to coordinate light and video without anything washing out anything else.”
Kenny worked the Maverick MK3 Washes and the rest of his rig with the LED house lights at SoFi to create an immersive field of light that enveloped the venue and the over 27000 vaccinated fans inside. In the end, by filling the big stadium with light, he made the grace that powered this event on (and off) the stage shine more brightly.