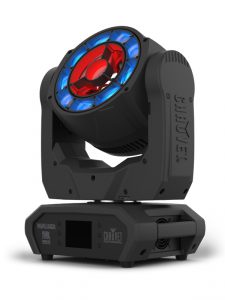 SUNRISE, FL – The Maverick MK Pyxis derives its name from a constellation of stars in the galactic halo of the Milky Way. True to its celestial moniker, the newest member of CHAUVET Professional’s Maverick family can produce an endless array of out of this world looks, thanks to a unique design that includes an outer ring of RGBW LEDs, a powerful zooming center pixel, 360° continuous pan and tilt movement and a host of other performance features.

“The Pyxis blazes a new path in design possibilities by incorporating a variety of different design features in ways that have never been done before,” said Albert Chauvet, CEO of Chauvet. “Designers who we’ve shown Pyxis to have been shocked that one fixture can produce so many different looks.”

At the center of the Pyxis is a single homogenous 60W RGBW LED with a fixed 3° beam angle. Surrounding this pixel is an outer ring made up of nine 15W RGBW LEDs with a 7°-45° zoom angle. Working together, the center pixel and outer ring are capable of creating a dizzying variety of captivating beam, wash, atmospheric and set piece effects.

A built-in virtual gobo wheel with background colors can be used to make the outer ring appear as if it’s spinning. This effect combined with the retractable motion of the center pixel and the 360° continuous pan and tilt movement can fill a stage of any size with dynamic high energy looks. Readily accessible built-in color effects add to this pixel mappable fixture’s versatility.

In addition to creating moving looks, the Maverick MK Pyxis can also do double and triple duty as wash and beam light. With a combined center pixel and outer ring illuminance of 27,560 lux at 5 meters, the fixture has the output needed for a wide variety of applications.

“We see the Pyxis as being a valuable addition to rigs of all sizes,” said Chauvet. “Its versatility and multi-functionality will help touring LDs create a wider variety of looks without increasing their budgets or taking up more space in the trailer. Thanks to its speed and variety of movements, this fixture can also be used to create some stunning wall and set piece displays at arena concerts. This versatility should make it a popular rental fixture.”

The Maverick MK Pyxis is versatile in terms of its control options as well, working with DMX, W-DMX, SACN, Art-Net, and Kling-Net. The user-friendly fixture is RDM enabled for remote addressing and trouble shooting. It also converts TCP/IP to DMX for shorter data cable runs, and it includes a battery backup touchscreen display with auto rotate depending on fixture orientation.

By incorporating these user-friendly features into the design of the Maverick MK Pyxis, the Chauvet team gives designers more time to focus on the creative possibilities opened by the new fixture. Given all that this celestially named light can do, those possibilities should extend very, very far.