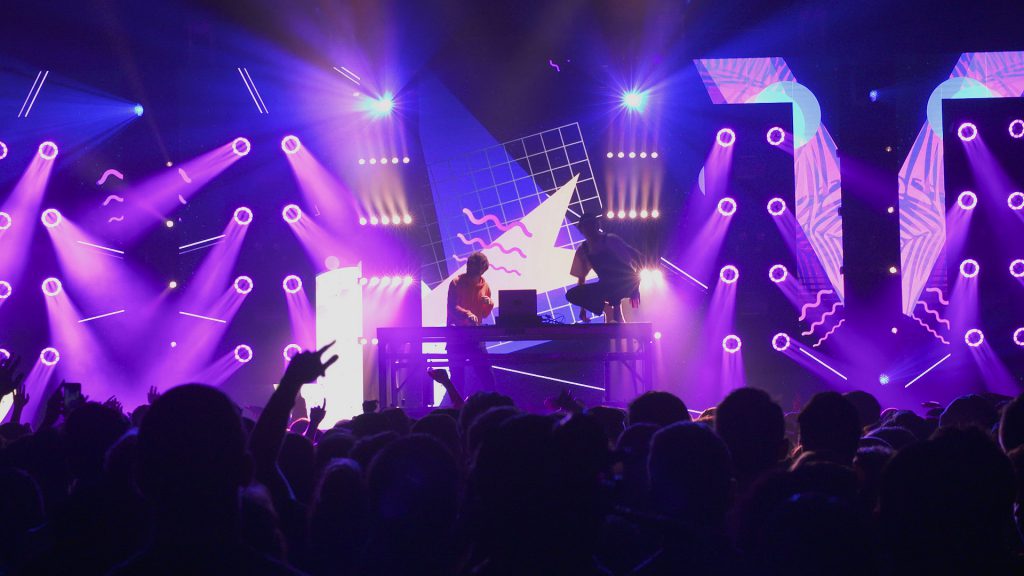 AUSTIN, TX – Success has not spoiled Louis The Child, nor has it made this pair of Chicago-bred DJs any less daring when it comes to reshaping their distinctive brand of EDM music. Since bursting on the scene two years ago with the highly original and spacey tune “It’s Strange,” the duo has continued to jump head first into the creative cauldron. Rather than resting on their laurels, they show a fearless willingness to experiment with novel eclectic synths, push percussion assemblages to the limit, and in general do whatever it takes to reach new musical heights.

The same Louis The Child philosophy is at play when it comes to lighting their shows. Going into their 32 -city “Last To Leave Tour,” which started October 12, the pair told the team at Creative Production & Design (Austin, TX) that they wanted a lightshow that looked radically different from the one that had been so well received on their previous tour. The CPD team readily obliged, coming up with a very unique design that (appropriately enough) drew much of its vitality from a brand new, convention-defying fixture, the Maverick MK Pyxis from CHAUVET Professional.

“Given the nature of Louis The Child’s music, we wanted a show that stood out,” said Justin Jenkins, owner of CPD. “Standing out becomes a lot more doable when you have a fixture that does things that nothing else does, which is how I’d describe Pyxis. When I first saw this fixture, I knew that its center beam, independent pixel ring, infinite pan and tilt, zoom and other features really made it different.”

Jenkins told CPD’s Kendall Clark, Louis The Child’s LD, about the new fixture. He too immediately saw the possibilities. “The artists wanted more video this year, because they didn’t have much of it on their last tour,” said Clark. “They felt this would make their show different, but I always prefer to break up video, rather than have one continuous wall, since this gives you more balance and showcases the stage design and artists more.

“I knew that if we wanted to break the video wall up into sections on this tour, we would have to intersperse those sections with lights,” continued Clark. “But to do that we would need fixtures that were very dynamic, fast with pixel mapping so they could blend with the video and create some cool looks. The Pyxis and the Rogue R1 FX-B were both perfect for this, so we started coming up with ideas for an integrated design that blended video and these fixtures.”

The job of turning that idea into reality fell to Dan Wyatt, Jenkins’ partner at CPD, who served as the systems integrator for the project. Wyatt came up with an ingenious modular design that has a video wall at its center and two pods to either side. Each pod is made up of 80” video panels that form in a circle-like configuration. At the center of each pod’s circle are eight Maverick MK Pyxis fixtures, vertically arranged in four groups of two (a total of 32 Pyxis units in all).

In the space between each pod, as well as in the spaces between the center video wall and the pods to either side of it, are four vertically oriented Rogue R1 FX-B fixtures (24 units in all). The rig also includes 12 Maverick MK1 Hybrid moving fixtures, arranged six apiece on the top and bottom of the pods.

“Kendall’s vision was to create an integrated and immersive look where video and lighting flowed together,” said Wyatt. “Our job was to develop a special rig that allowed us to float lights in the air so he could create that look. The Pyxis fit this concept very well, because it was compact and you could get so many different looks out of it, so you needed fewer fixtures. This allowed us to reduce the load on our pod structures. We were also able to fit everything in one trailer for the tour — and since the design is modular, we can expand it or contract it for different size stages.”

Regardless of the stage size, the 14-universe Louis The Child lightshow is immersing crowds with is endless flow of video and lighting mash-ups. “All of the fixtures in our rig are run on full pixel mode so we can utilize their full features,” said Clark, who is running his show on sACN with CAT 5 in and out. “We aren’t showing video images on our fixtures, but we’re pixel mapping patterns that flow with the video displays. I’m treating the Pyxis as multiple fixtures in one, because it does so much. I get some very unique looks when I do things like black out the center of the Pyxis and zoom up the pixel on its rim to create a hollow beam effect.”

The video walls in the show, which are made from 24 F4 video panels and 88 PVP X3 panels, display a wide variety of custom content, including breakout patterns and animated images. At times, the panels will also display chase sequences of colors, making them harmonize with the lights around them.

All of the video displays in the show are time coded, but Clark is busking the lights in his rig to flow with the music and the video images. “We are breaking down the barriers between the video wall and the lights on this tour,” said Clark. “We’re harmonizing them to create a single panoramic vision on the stage.

By breaking barriers and defying convention, the CPD team has come up with something new, different and very engaging, not unlike what Louis The Child has done in music.