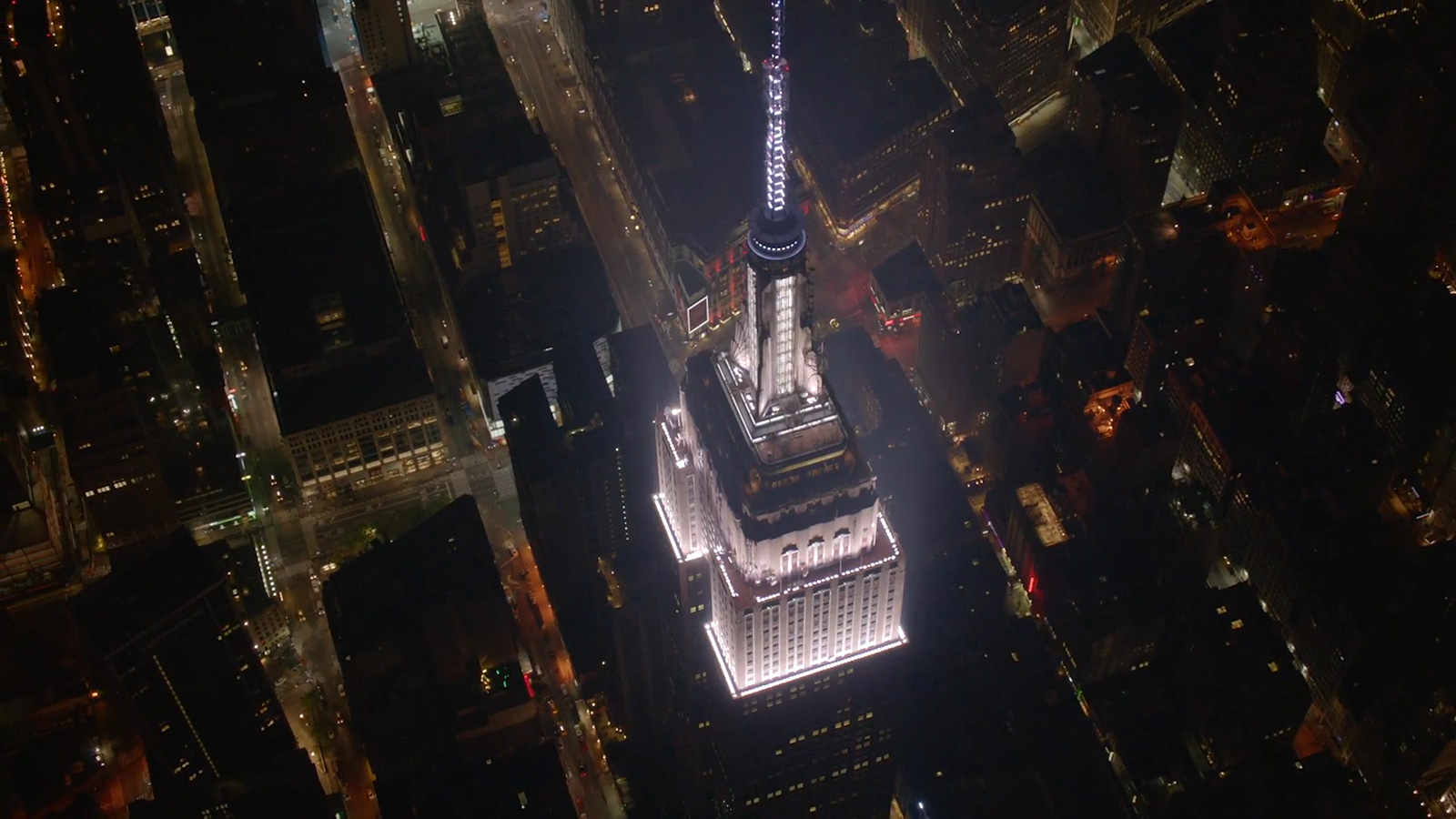 Meeting this Los Angeles-based designer, we were eager to hear about some of his epic projects, like how he transformed the Empire State Building with the iconic structure’s first synchronized music and lighting display. Or, how his work as one of the driving creative forces behind some of Pink Floyd’s spectacular lightshows influenced a generation of LDs.

Ever the gentleman, Brickman graciously obliged us, sharing stories behind the highlights of his diverse and impressive body of work. But it was when our conversation turned to smaller things, like the nuances of separating lighting and video on the concert stage, or the power of dark space to alter the direction of a design, that he became most animated.

Like great edifices that are built brick by brick, even the most monumental designs must be called forth through careful attention to the smallest details. It is by mastering the granularity of detail that Brickman has been able to create designs that venture into the realm of art, a state that he believes a lightshow enters when it acquires the power to move people emotionally.

Brickman’s journey in light began as a teenager, when he did DJ work in his native Philadelphia. A short time later he met and designed for a young Bruce Springsteen (“before he became Bruce Springsteen”). This led to a meeting with Pink Floyd, which was ultimately followed by a Renaissance-like career that has seen him work for performers such as Paul McCartney; on films for directors like Steven Spielberg; on television (“Let’s Make A Deal”), and in landmark lighting (in addition to the Empire State Building, he’s lit Venice’s Grand Canal.) Speaking to us from the offices of his collective Tactical Manoeuvre, Inc., the Emmy-nominated designer shared his insights into art and light. 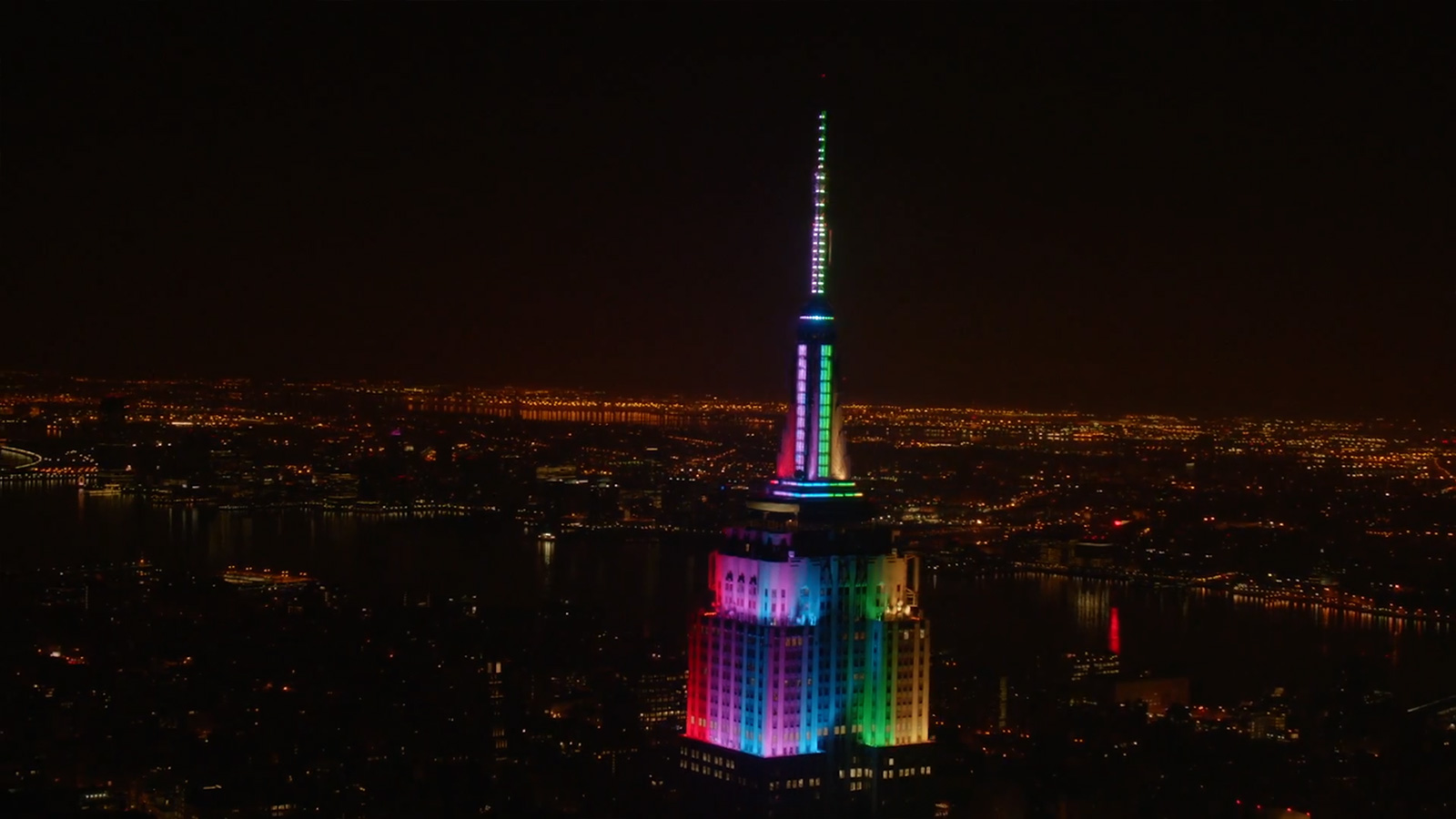 In 2012 you lit the Empire State Building for the first of what would become many times, using millions of pixel mapped LEDs and music that in effect, turned the building into a source of entertainment. Do you think we’re going to see more cases where lighting transforms the role of buildings?
“In a word –‘yes!’ Tactical Manoeuvre, Inc., the collective that I formed with a group of very talented people, is focused on creating building art as we did — and continue to do — for the Empire State Building. We have a few major projects that we’re working on now, which I have to keep under wraps. But you’re absolutely right about art like this appearing on more buildings.

“I should point out though that it isn’t just about entertainment anymore. We’ve gone from just throwing pretty lights and video on a building with some music, to something more engaging. The building lighting and video displays we’re doing now are going beyond entertainment. We’re reaching out to engage people, getting them to use their minds and technology to appreciate the bonds that connect them with everyone in their community.”

Is this building art interactive then?
“I wouldn’t say it’s interactive, as much as it’s engaging, the way a good book, play or any work of art should be. The intent of our work on buildings is to get people to engage their brains, so they come together. This is the purpose of music and art – they’re something that enriches us and joins us as a community. What more prominent symbols of communities are there than buildings? So, building art has a great potential to help people overcome the subjects that divide them. Maybe it’s because I’m a child of the Sixties, but I want my work now to make a difference, not just entertain.” 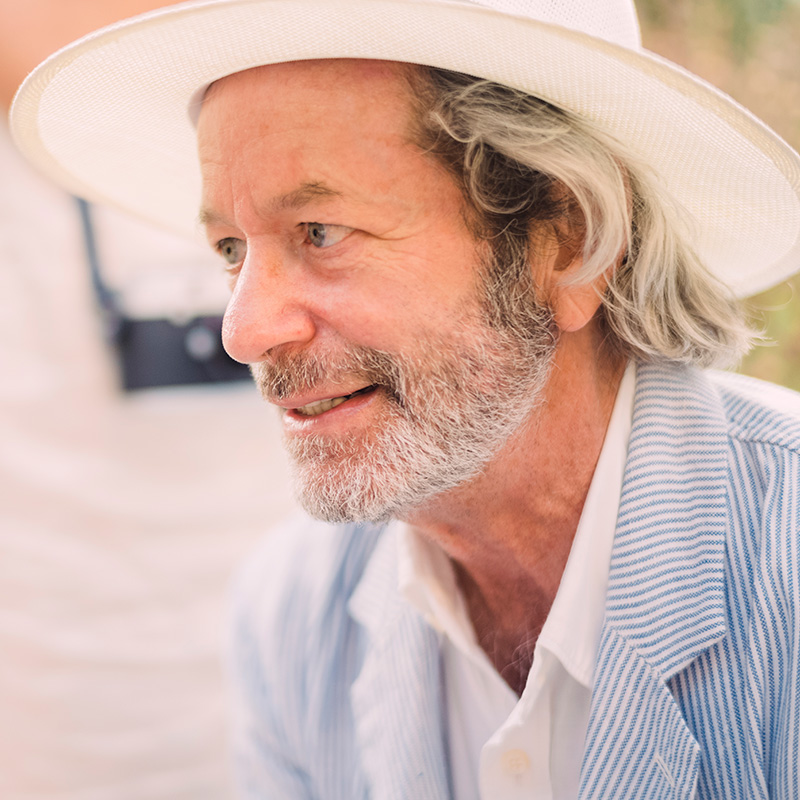 You mention the Sixties. How did being a part of that generation affect you as a designer?
“The Sixties represented a renaissance. For me, they connected me to music in a powerful way, and that’s been a big influence on my career and life ever since.”

Back to the Empire State Building for a moment. You did a stunning show with Eminem on the Observation Deck. What was that like?
“A whole lot of fun! It was an idea that was three years in the making. I thought it would be cool to have someone perform on top of the Empire State Building when we had it lit. Doug DeLuca from ‘Jimmy Kimmel Live!’ signed off on the concept, and we looked at a list of names before settling on Eminem. The Observation Deck was cool, but we really went much higher. I got this idea: ‘why not put the artist at the very top of the building?’ So, we went up to the 93rd and then 103rd floor and got these great shots of Eminem performing probably higher than anyone ever has before or since… Got some really dramatic footage and 10 million or something views on social media.”

Lighting Eminem on the 103rd floor of the Empire State Building! Where do you get these ideas?
“Ha ha, wish I knew. I just never stop thinking of new things.”

You called the lighting of the Empire State Building ‘art on a grand scale.’ Your concert works for the likes of Pink Floyd and other bands have also been rightly called ‘artistic.’ What makes lighting a work of art rather than something that merely illuminates a building or a performance?
“That’s a tough question. I can answer one way and say, ‘Art is when people say it’s art.’ Really, if you think about it, that’s always been true, right? There’s always a level of subjectivity in these judgments.”

Sure, but from Marc Brickman’s perspective, what elevates lighting to the point where it’s art?
“Like any creative effort, lighting becomes art when it gives emotion to a scene. When it connects people to the scene and moves them in a way that makes a real difference to them. Like any art, lighting doesn’t have to ‘mean’ anything itself, but it has to move you. It has to touch you emotionally, just like a painting, but unlike a painting, lighting involves a moving frame, so there’s a lot more going on. Of course, when you are lighting a concert, the art always comes from the performer on stage, not your lighting.

“You mentioned Pink Floyd. When I first hooked up with them Roger (Waters) was really the stage director, a tremendous artistic visionary. After Roger left, David (Gilmour) gave me a lot of freedom with the production designs. Throughout the whole time, we had a lot of input from some very innovative people. The key thing about any design is collaboration. You have to get a lot of creative people working together to make something good happen.”

Given the artistic nature of your work, we have to ask — do you have an interest in painting?
“Yes, I’ve pretty much drawn my whole life. Recently I started painting again, oils and acrylics.” 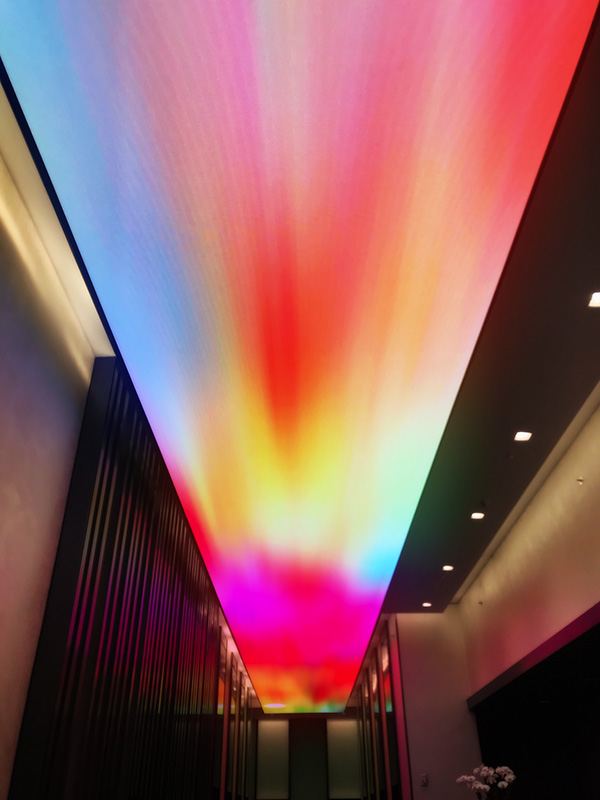 Are there any painters from the past who you think would have been great lighting designers if they were around today?
“I would have loved to have seen what the Sixties abstract artists Clyfford Still and Mark Rothko would have done with lighting giving today’s technology.”

Can you elaborate on that last point? How important is dark space in your designs?
“It’s wildly important! Darkness is what kind of gives meaning to light. The dark spaces deepen the sense of engagement. When people can’t quite see everything in light because of shadows or backlight, they have to try harder to figure out what’s going on. Dark spaces create a sense of mystery that adds to the storytelling aspect of a design. I relied on this thought with Springsteen in the early days. I would backlight him when he was telling stories, so you couldn’t quite see his face. This made your mind work and wonder what’s going on? Would the stories being told have been as compelling if Bruce was in bright white light? Yes, but an artistic element probably would have been missing.”

Speaking of Bruce Springsteen, you met him when you were both young. How did that happen?
“I was selling lights in my hometown of Philadelphia and he was playing the local Philly, New Jersey, New York circuit. He needed lights, so I not only provided the lights, but started designing for him. Back then, we would drive to gigs in station wagons and vans. It was an experience. Through Bruce, I got the opportunity to work for Pink Floyd.” 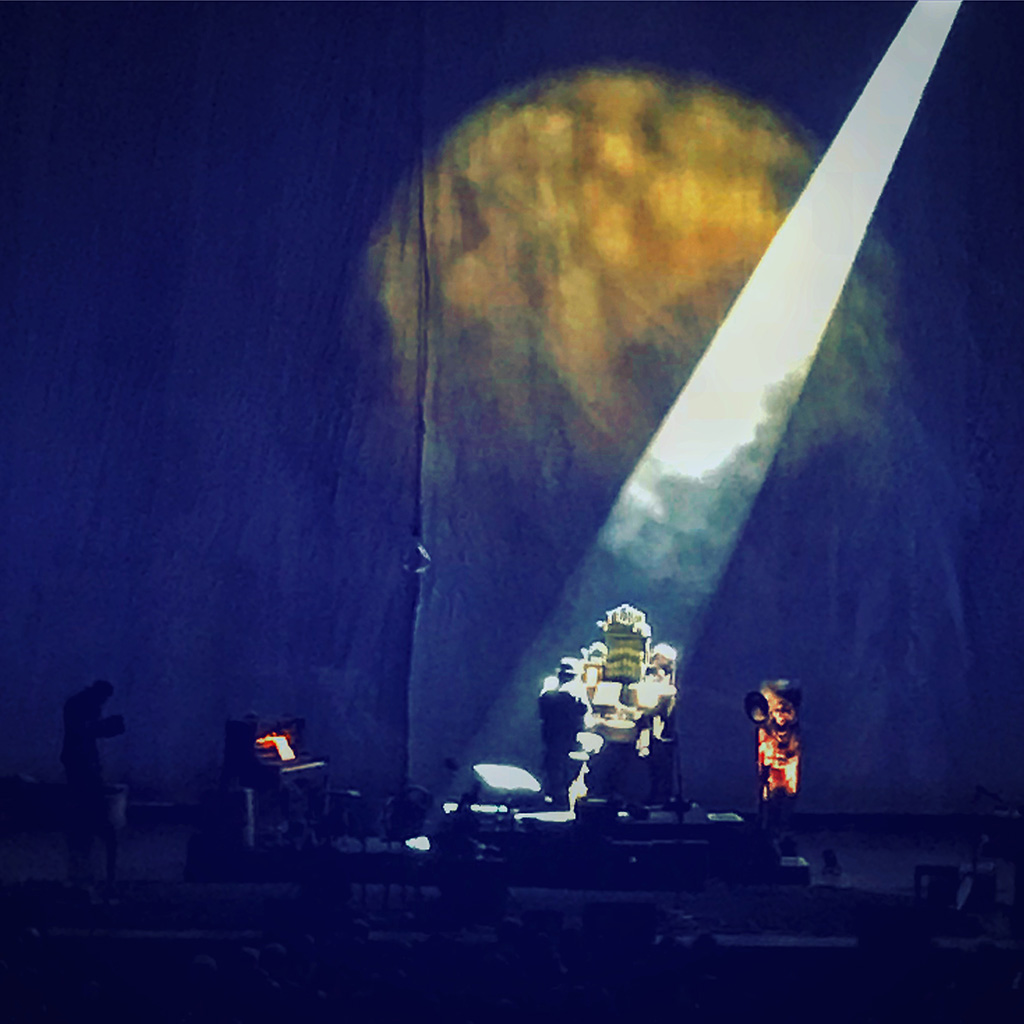 You also went on to work for a long list of stars like John Mayer, Pink Floyd, Keith Urban, Neil Young, Paul McCartney and many more in addition to lighting movies by directors like Steven Spielberg and Sam Raimi. How did you make the transition to film?
“Joel Silver came to a Bruce Springsteen show. He reached out to me to create all of the concert scenes in ‘Streets of Fire.’ For the next 10 or so years I became the go-to doctor, to incorporate concert design into films. On that path I was influenced by various award-winning cinematographers. They taught me a great deal about exposure on film, giving me the knowledge to create the live design look on film.”

Who were the big influencers in your career?
“Without question Mark Fisher who was responsible for the original Pink Floyd designs. Jules Fisher, Tharon Musser and Chip Monk were all pivotal characters in my growth.”

So when you started out selling lights and doing DJ work in Philadelphia, did you ever in your wildest dreams think that your career would take this path?
“No, I was just looking to make a living doing something I loved. Really, I kept working hard and following opportunities. I have been very fortunate in my career to hook up with some incredible artists. I remember on my 30th birthday, Joni Mitchell made a painting for me. Who has that happen to them when they turn 30? It has been amazing.”

How would you like to be remembered as a designer?
“I’m not sure how to respond to that without raising more questions than answers. As we just discussed, I’ve had some amazing collaborations. All of these artists trusted me, and I’m very proud that I always lived up to that trust. As far as my work goes, lighting design, or concert lighting design at least, is ephemeral. Nothing is left of your work once the show ends. Now that I and Tactical Manoeuvre are creating light installations around the world, this allows the work to be viewed in its original form over time. You should come back and ask me the same question in a few years. I am not done yet. There is still much to create.”