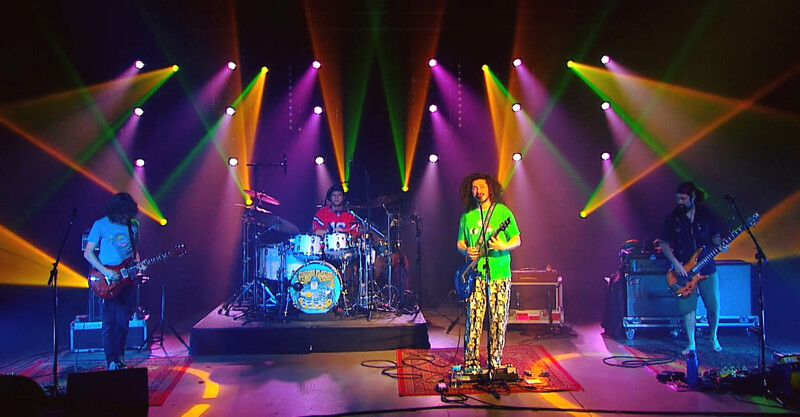 BALTIMORE – Pigeons Playing Ping Pong thrives on contact with their large, loyal base of hardcore fans. Feeding off the energy of the crowd powers the psychedelic funk jam band through a relentless touring schedule that includes about 200 shows a year. But a wildly cheering audience was nowhere to be seen when the irrepressible quartet took to a temporary stage set up at Showtime Sound’s warehouse on Saturday March 14 for a live streamed concert on nugs.tv.

Nevertheless, “the flock,” as the quartet’s aficionados are affectionately called, got a healthy dosage of Pigeons magic thanks to 90 minutes of inspired free-flowing music, accompanied by a lively Manny Newman designed light show that featured CHAUVET Professional fixtures.

Covering the stage with bold vibrant colors, Newman evoked the band’s unabashedly modern-hip image on stage while still keeping his looks manageable for the camera. Varying colors and light angles, he was able to create a flowing sense of motion without relying on pronounced pan and tilt movements. 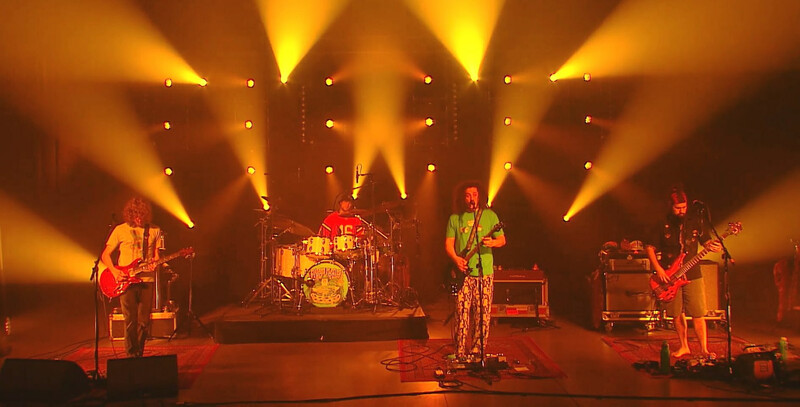 “The lightshow wasn’t too different from what we typically do on the road, except we didn’t use much crowd scanning movements and blind positions to avoid blowing out the video” said Newman. It was also critical to make sure that CTO was adjusted for the camera. Luckily, Showtime Sound provided a screen to view the live stream and balance the brightness. Their warehouse was also large enough to set up our entire rig.”

Helping Newman achieve the looks he desired were 18 Rogue R1 Wash fixtures positioned on quick grids; eight Rogue R2 Wash units used for downstage front washing; and four Rogue R2 Washes arranged on stage left and right for side washing. “The most important thing for the camera is front lighting – the second is side lighting,” he said. “If you have any of these on, you will have a happy camera operator, and a good-looking video.”

Part of the “Live From Out There” Couch Tour Series, the show did more than give Pigeons and their flock of fans an opportunity to connect during a time when public gatherings are canceled; it also raised money for the Sweet Relief Musicians Fund COVID-19 fund, which aids musicians and music industry workers who have suffered a loss of income in the wake of the prohibition on touring and live events.

“The 11E1even Group, which our manager Dave Dicianni works for, deserves a lot of credit for putting this together,” said Newman. “They are working with nugs.tv to bring a steady flow of unique digital content including full sets, special programming, first-time collaborations, and more from artists on their roster, as well as other acts.”

Pigeons Playing Ping Pong will be streaming five sets as part of the nugs.tv series, something that Newman welcomes, not just as a creative opportunity, but as a chance to demonstrate solidarity with his colleagues. “This is a tough time for our industry and these streams are helping us all get through it,” he said. “If we can continue to provide content that keeps fans engaged, then hopefully our industry will be able to move forward after this is over and provide entertainment to all the music lovers around.”