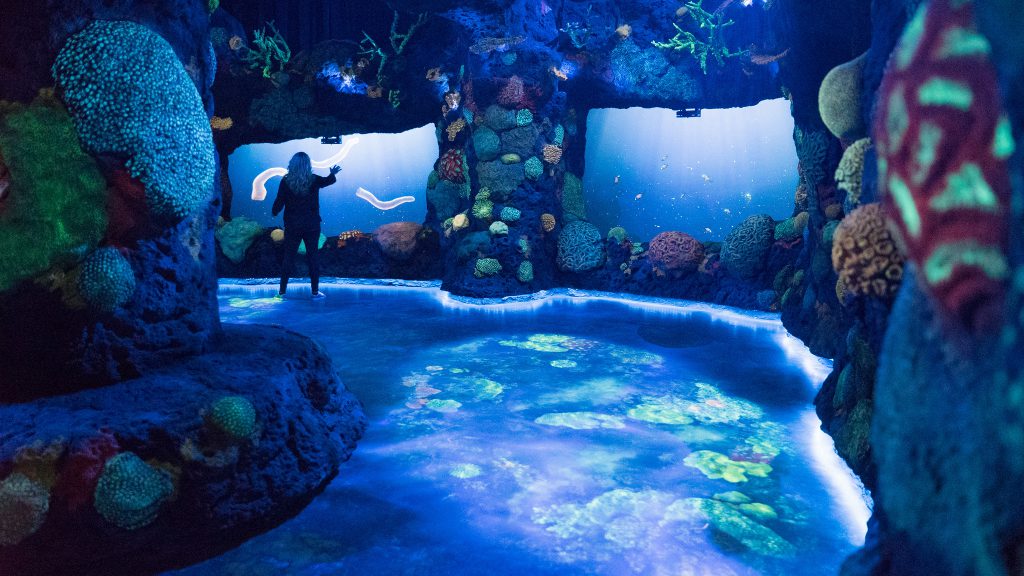 NEW YORK – It’s 8,504 miles from the island of Manhattan to the South Pacific’s Solomon Islands, but now anyone in the Big Apple can experience this underwater treasure and a host of other nautical wonders right in their own backyard by visiting National Geographic Encounter: Ocean Odyssey. Located in Times Square, this 60,000-square foot multi-media experience digitally takes visitors on an entertaining and immersive adventure across the ocean, from the South Pacific to the coast of California, where guests can get up close with dozens of species, including mischievous sea lions, sharks up to 20’ long, a 50’ Humpback whale, a battle between two ferocious Humboldt squids, and much more.

Adding to the immersive environment in the multi-room experience is an elaborate and detailed lighting design by Lightswitch that features a collection of over 200 CHAUVET Professional fixtures, supplied by 4Wall Entertainment. Used throughout Encounter, the fixtures add color and texture to its key scenic elements.

“Video is also a major storytelling element in Encounter, but the reason it works is that all of the design elements, including the lighting design, work as a whole,” said Howard Werner of Lightswitch. “The lighting not only sets the scene for a movie to play, but also is in sync with the video and the audio elements of Encounter. This synchronization is what creates a cohesive design and fully immersive experience.

“In addition, technology provides us with tools as designers, and sometimes video is the right tool to create a feeling,” continued Werner. “When that’s the case, we work to support the video with light to create a complete experience for the audience and extend that experience off the screen and throughout the space.”

As an example of this interplay of video and light, Werner points to a battle scene between the two ferocious Humboldt squids. This scene extends beyond the frame of the audience’s peripheral vision, with the action volleying between two video screens on opposite walls. In this case, the design team uses lighting to direct guests toward the screen where the action is taking place.

Lightswitch was initially brought into the project by Falcon’s Treehouse, who was hired by SPE Partners, creators and developers of Encounter. “We worked with Falcon’s Treehouse and SPE’s world-class global team to create this first-of-its-kind entertainment experience,” said Werner. “At the same time, all of us also kept an eye towards budget and sustainability.”

Over 150 COLORado 1 Solo RGBW fixtures are positioned at various points throughout Encounter to wash areas with deep blues and greens, as well as other color fixtures to enhance its realistic effect. “The COLORados are great lights for projects like this,” said Werner. “They are small, versatile and relatively inexpensive with short lead times.”

A memorable moment at National Geographic Encounter is the “Bait Ball” scene, which features a massive 40’ dome with 3-D video that depicts dolphins, birds and Humpback whales feeding on large groups of tightly packed fish. Lightswitch used seven COLORdash Batten-Quad 12 fixtures in the Bait Ball scene in order to create a realistic moment in nature.

“We used the E-910FCs in several different areas,” said Werner. “In one space, we had to create ‘simulated’ shadows of kelp on a wall. There is a scenic kelp forest in the space, but lighting the kelp and creating real shadows wasn’t possible because of the limited hanging positions. Therefore, we created custom templates that had false kelp shadows in them, and then projected them onto the walls using Ovation E-910FC fixtures. Color and intensity were then balanced to create a seamless look.”

For visitors, their experience begins before they even enter the actual venue, which is located below ground. The street level lobby has a “watery texture” on the floor, created in part with six Ovation E-260WW ellipsoidals. The high-output Ovation units were selected, says Werner, “because we wanted some punch in a space that gets plenty of daylight through large windows.”

In addition to the CHAUVET Professional fixtures in the experience, six Abyss USB water FX units from CHAUVET DJ are also installed throughout Encounter. “We used a lot of water effects in the design, including the Abyss fixtures for layering a water motion look on scenic panels,” said Werner. “The scenic panels are also painted with water texture. Any time you can light a painted texture, the effect is fantastic!”

Beyond lighting and all the high-tech equipment involved in the project, National Geographic Encounter is also the product of sheer human talent and collaboration. “A project like this does not happen without an extremely talented team, which in this case included Academy, GRAMMY®, and Emmy® Award-winning artists, focused on producing a never-before-seen experience that changes the landscape of entertainment and cinema,” said Werner. “This was a true team effort by Lightswitch and all of our collaborators. For me, it was especially rewarding to be a part of something that takes guests on a journey to a place they would likely never otherwise see. Encounter gives people the chance to come face to face with a 50’ Humpback Whale. How cool is that?” 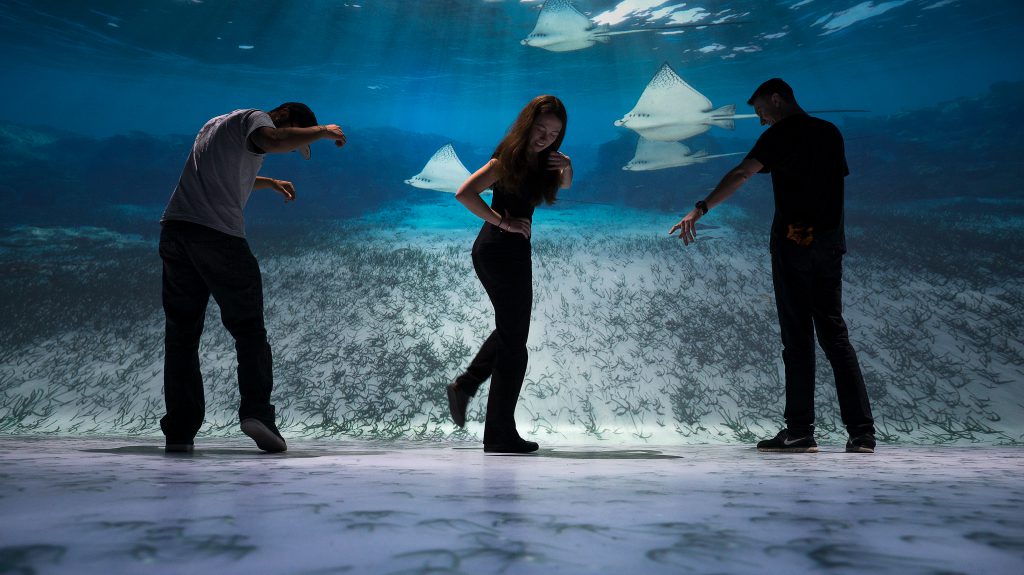