HOUSTON – The 2016 NCAA Men’s Basketball Final matchup between Villanova and North Carolina will definitely go down as one of the most exciting games in tournament history. It will also be remembered as being among the most successful. Televised across the Turner networks, the game was the second most viewed cable broadcast of a college basketball contest ever. Not to be outdone, the fan events surrounding the game also reached dizzying heights. This much was readily apparent at Houston’s Discovery Green Park, where crowds of 165,000 filled the park to capacity for the three-night March Madness Music Festival, which was also live streamed to millions more at home.

Produced by Turner Live Events, the festival featured Maroon 5, Kendrick Lamar, Pitbull, and others. Adding to the excitement level on the stage and in the audience on a warm Houston evening was a dynamic lightshow. John Dickson of LD Systems in Houston worked with Turner Live Events to create the rig with programming done by individual band LDs. Throughout the festival, the high-impact show gained energy from the rapid movements of the rig’s 32 Next NXT-1 moving LED panels from CHAUVET Professional. 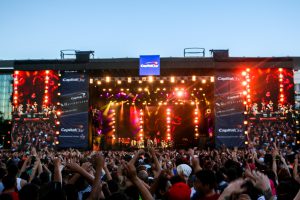 “The design was built around two massive vertical video walls positioned downstage left and right,” said Dickson. “Balancing out the walls, we flew a ton of intense moving beams, spots, washes and some other fixtures on rows of vertical and overhead horizontal truss. Then we connected these two design elements by lining the sides of both video walls with the Next NXT-1 – eight units on either side of each wall. The movement of the NXT-1s connected the video walls visually to the movers over center stage, which created a more cohesive look.”

Ironically, the original design for the March Madness Music Festival stage called for the video walls to be flanked by non-moving fixtures. Adding the moving LED panels was a last minute decision, says Dickson. It is one that he is glad he made.

“Our first thought was to go with static, incandescent audience blinders” he recalls. “Then the opportunity arose to use NXT-1s. I had no experience with these fixtures, but we decided to give them a try, because we felt that having moving panels around the massive video walls tied them together more tightly with the rest of the rig.” 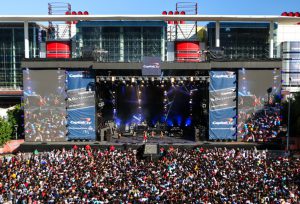 Relying on the NXT-1 fixture’s built-in macros, Dickson created a variety of breakout patterns to differentiate the panels from the rest of the rig, while at the same time connecting the two walls to the rest of the stage through movement. The Next NXT-1 panels also added dimensionality to the design, something that came off very well on television.

“The NXT-1 definitely introduced another layer of bright, dynamic, moveable light to the design, which was especially important to Turner Live Events, particularly for their televised portion of the show,” said the lighting designer, who controlled his rig with a grandMA2 Full Size. “The panels were also very quick, so they had no trouble keeping pace with the rest of our lightshow.”

To fans watching live and on TV, the fast-moving lightshow seemed to flow naturally and effortlessly. Like all such creations, however, it was not without its trials. “We had to deal with some weather during setup. However, I was fortunate to have a really great crew in Nathan Brittain, Wade Henry, William Diven, Brian Stephenson, and Fred Deci.  I also enjoyed working with Turner Live Events, as well as guest LDs like Brian Jenkins of Maroon 5, Travis Hagenbuch of iHeart Radio, Mike Petrecca of Kendrick Lamar, Tyler Shapard of 21 Pilots and Robb Jibson of Fall Out Boy. Working this festival was a great experience for us, and everything I’ve seen indicates that the fans liked it a lot too.” 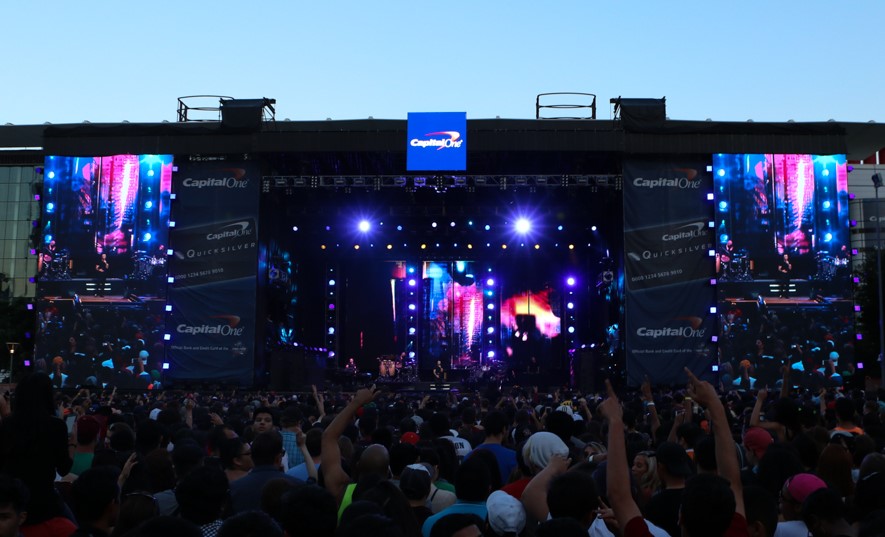