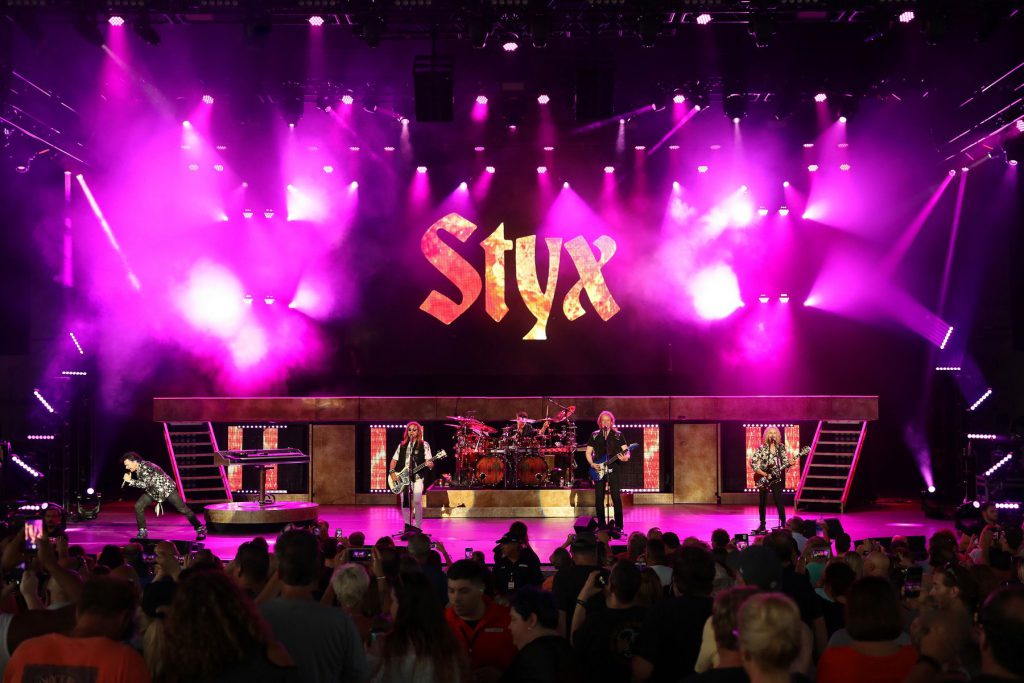 LOS ANGELES – When designing for Styx last summer, Jeff Ravitz wasn’t just thinking of creating a high-impact lightshow for the multi-platinum band on their co-headline tour with Joan Jett & The Blackhearts, he was also looking ahead to the future. Wanting to give his client a distinctive look that they could carry with them to one-offs and local tours when their 27-city amphitheater tour ended, Ravitz and his team created a striking set piece that continues to wow audiences today, long after the autumnal equinox has passed.

Helping him in this endeavor was a collection of CHAUVET Professional COLORdash Batten-Quad 12 fixtures. Built into the Styx stage set, the eight RGBA linear washes are configured in two horizontal lines, one at the top of the set wall, the other at the bottom. With 12 individually controlled LEDs producing vibrant colors and bright whites, the pixel mappable fixtures are a key element in a commanding set piece that has gone on to become a signature part of all Styx shows.

In many respects, this impressive structure was the result of necessity inspiring creativity. “The staging logistics of a co-headlined summer shed tour really prompted this design,” said Ravitz. “A co-headline tour requires a degree of efficiency in order to execute quick changeovers between acts, and the two bands are going to be using the same overhead lighting system. Even though the different designers on the tour will use the system uniquely, there can be a sameness to the overall feel of the shows if you’re not paying attention. So we attempted to create an identifying look by ‘accessorizing.’ I wanted something that could distinguish our show that didn’t involve overhead lights, and at the same time, I wanted to create a look that the band could use after the tour was over.”

Ravitz determined that the best way to accomplish this objective was to create a back set accented with the COLORdash Batten-Quad 12 fixtures. “Having the COLORdash fixtures in the set piece was not only a problem solver for the co-headline tour, it also gave us a look that we could carry over on local tours,” he said. “The COLORdashes helped to define the set with vibrant edge-lighting. Plus, the fixtures opened up virtually unlimited ways to support the music with color and animated pixel chases.”

The prevailing mood at a Styx show is bright, upbeat and full of energy, in keeping with the style of music that has made the band iconic. Ravitz reflects this feeling with a lightshow that features an array of high-output moving fixtures. The COLORdash Batten-Quad 12 washes built into the set piece have no trouble keeping pace with the big movers in the touring rig.

“I found the COLORdashes suited our vision perfectly,” said Ravitz “They were small and compact enough to be understated when built into the set structure, yet they were extremely powerful. We even had to dial them back after opening night on the summer tour, when we saw how bright they were even with all the ambiance and competition from a large lighting system. Also, when the band is doing one-offs, and we’re not always sure of the impact of the house rig, the COLORdashes generate enough visual excitement to fill in any gaps.”

The COLORdash fixtures also have the versatility to reflect the wide range of moods that the band touches on during its shows. “Styx covers an array of styles, from pop-rock, prog-rock and theatrical, to a bit of metal and lower-key romantic ballads,” said Ravitz. “Over the course of the show, each song has its own personality and tells its own story. So, the color palette has to be unlimited.

“Color is so fun, and I try to keep a level of variety, too,” continued Ravitz. “Sometimes I use the COLORdashes to echo the overhead system color, and sometimes I have them provide contrast. It all depends on what I feel works best for the statement we are going for. So, even though each song has its own color scheme, over the course of the evening you might see almost any color. Yes, green too!”

This design of a lightshow and its subsequent execution on the road doesn’t happen without a solid team of collaborators, and Ravitz credits much of the success of the summer tour to Libby Gray, his Lighting Director for over fifteen years and video content creator. He also praises programmer Jason Badger, who worked on the foundation of this look for several tours, programmer Seth Rappaport, who joined the team for its summer tour, and Brian Wong, the tour stage manager.

“Everyone felt good being a part of this tour,” said Ravitz. “Working with Styx is a reward in itself, especially when you look at all this group has accomplished and the energy that they bring to every show. There’s a certain quality to a Styx show that makes people want to come back.”

Now when they do return, people will see a distinctive and familiar look supporting the music of Styx, thanks to an ingenious lighting design that transformed a challenge into an inspiration. 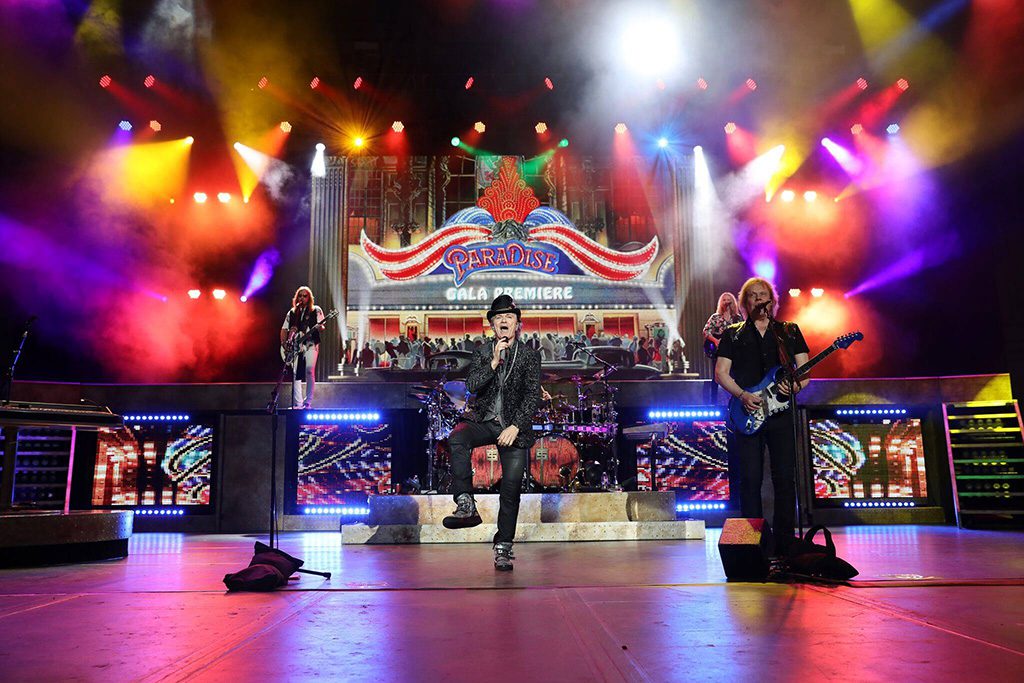