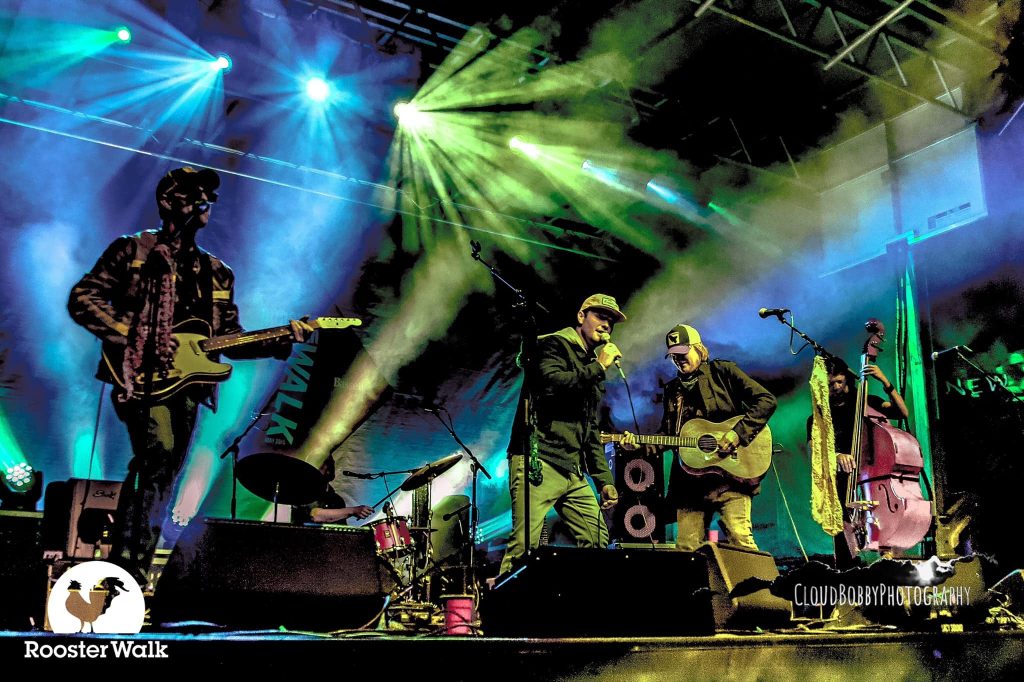 MARTINSVILLE, VA – Jason Patsel likes to connect outdoor festival stages to their surroundings. Color washing the rustling leaves of nearby trees, and covering the ground with evocative gobo patterns will, he knows, do far more than create holistic visual images.  By extending his lighting over a greater area, he will also  have a transformative effect on audiences, giving rise to moods they can feel together.

Creating this shared experience has always been an important part of Patsel’s design philosophy, but never more so that it was this May when he lit a show by The Yarn Project at the just-reopened Rooster Walk Festival. Like live music venues and events everywhere, the iconic festival in the foothills of the Blue Ridge Mountains went silent during the pandemic.

Now, with restrictions eased, the festival, which normally goes on for days, has been sponsoring individual shows, following state safety protocols.  Lighting this concert for fans who had been festival-starved for over a year, Patsel wanted to create the most immersive environment possible.

“My favorite look of this particular show was when I used all the trees surrounding the stage,” said Patsel. “What we wanted to create was basically a 360 view of a whimsical look that incorporated every aspect of the ‘natural amphitheater’ that was the festival site.”

Helping Patsel in this undertaking was a versatile rig that featured a collection of Rogue R1 Spots from CHAUVET Professional. Like the rest of the fixtures on stage, the 140-watt movers were supplied and set up by 81 Productions.

“Positioning fixtures is key for creating depth and texture in any lighting rig,” said Patsel. “So, in this instance we wanted all of our spots in a line midstage, and all of the washes in a line upstage on the ground. This configuration led to a lot of great looks. Especially when hitting the landscape surrounding the stage!”

To reflect the band’s blend of Appalachian stomp and rock, Pastel created eclectic color combinations that flowed with the free-spirited sounds. “Jumping from a white and CTO folksy highlighted scene for one song, to a blue and yellow punchy scene on the stage for the next, kept things moving,” he said. “I also incorporated some very nice gobos into the show with the R1 Spots. There were songs on the set list that I knew would go perfectly with a shattered gobo, and others that matched my little person gobo. It was nice to have everything working in harmony.”

Also working in harmony, notes Patsel, was the team responsible for making the show happen.  “Berkeley Dent and Tyler Carter were great setting up the rig,” he said. “The Rooster Walk team is phenomenal — and William Baptist, Johnny Buck, Danielle Ward and Matt Leonard kept everything running smooth as silk.”

Connecting people, whether on the production crew or in the audience, to the magic of the moment is what a festival like Rooster Walk is all about. That’s what makes live music so special and why Jason Patsel and his team were so glad to welcome it back.