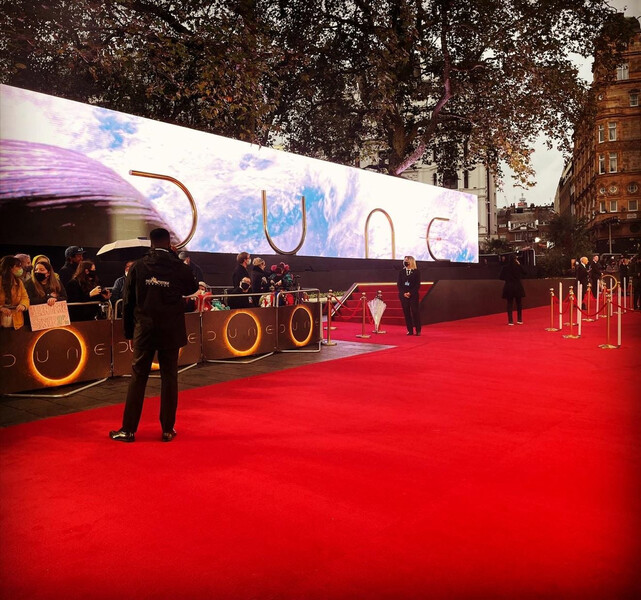 LONDON — Spice, the mystical matter found on the planet Arrakis in the film Dune, possesses some incredible powers, such as enabling travel at speeds faster than light. But even this potent substance, as impressive as it is, was apparently no match for London’s rain.

There were some showers during the glitzy red carpet premiere of Dune outside the Odeon Leicester Square, but that did nothing to dampen the enthusiasm of the crowds or global press corps who turned out for the star-studded affair, produced by Limited Edition Event Design.

Impact Production Services (IPS), which provided technical services for the event, didn’t have anything as omnipotent as Spice in its quiver, but it did have a powerful tool for setting up outdoor video walls: the CHAUVET Professional F4IP LED panel.

The IPS team used 236 of the 4.8 mm pixel pitch panels to create a 28-meter wide by 4-meter high video wall that ran almost the entire length of the red carpet. Displaying a series of dramatic images from the movie that were supplied by the film company and played back via a Disguise Media Server, the wall added a powerful and engaging cinematic flavor to the event, in addition to providing an attractive backdrop for videos and photos featuring the hit film’s stars.

“One of the main reasons for the premiere was to attract media coverage, and with such a large display being installed, it was essential that all the technical production elements not only looked great but were also reliable,” said Tom Warden of IPS. “The first consideration, given that the installation was outdoors, was to choose an all-weather, IP-rated panel. IPS have already used the CHAUVET Professional F4IP and X6IPhttps://www.chauvetvideo.com/pvp-x6ip/ LED screen systems extensively in outdoor applications, so we knew that they would perform well, even if the weather was against us. 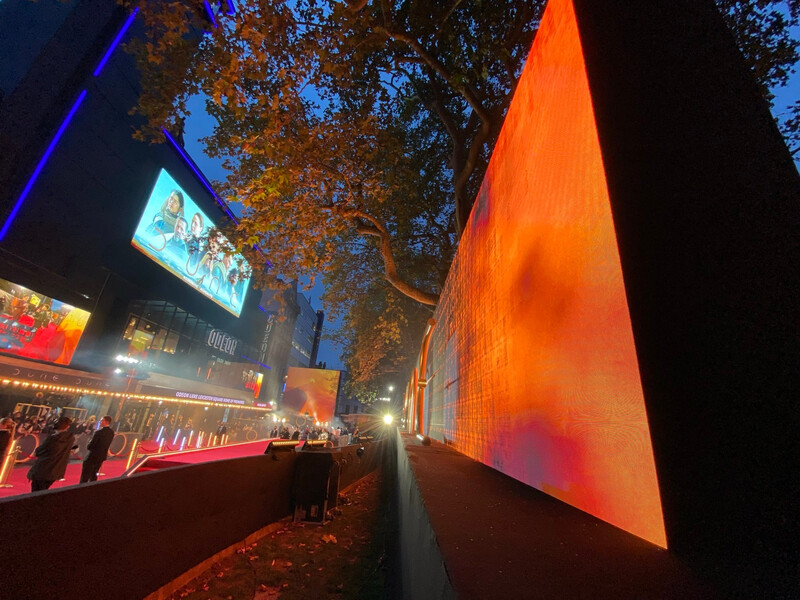 Using an ultra-widescreen format (nearly a 64:9 ratio), the IPS team achieved an overall pixel resolution of 5824 x 832. Clever mapping enabled the content to be displayed from a single 4K video feed.

As is invariably the case with events that flow with the seamless precision of a well-oiled machine, the Dune Premiere was, in reality, the result of hard work, relentless attention to detail, and extensive contingency planning on the part of all involved. This began with Limited Edition Event Design’s James Barnfather and Richard Godin; the latter of whom designed the lighting for the event and ran it using a ChamSys MagicQ MQ 80 supplied by IPS.

James Mason, project manager for IPS, Dan Ainsley, technical lead, and media server programmer Nathan Dunbar also contributed greatly to the effort. The IPS team connected the F4IP panels with True1 cables for power and EtherCon cables for data. Power was supplied via onsite generators, and multiple feeds were used to protect against any single point of failure. As a further safeguard, each panel was connected with two data feeds, with panels grouped into multiple zones to provide data redundancy. 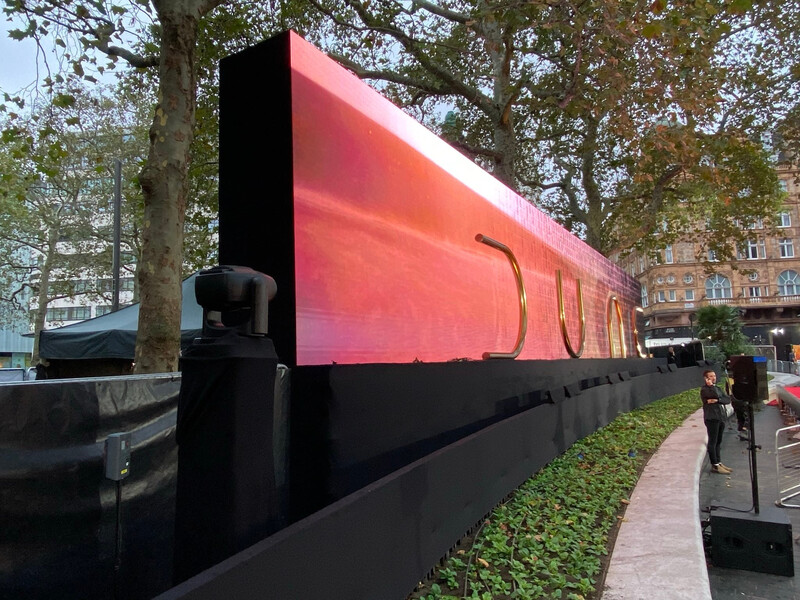 The server was programmed to reconfigure the content using pixel mapping to fit within a 4K resolution feed by essentially cutting the image in half vertically, and then arranging these two feeds one above each other. This enabled 1:1 pixel resolution to be maintained within a 3840 by 2160 4K UHDTV resolution image feed that was reconnected via display port to a Novastar 4k UHD screen processor. The content was then reconfigured to map across the F4IP panels with all the preset calibration settings applied.

A custom-designed support structure was used to level the wall along the sloping ground onsite and incorporate a platform to support its DUNE logo lettering as well as all the ballast weights used to meet wind loading requirements. The panels stood on the leveled stage platform and were attached at the rear using clamps to connect to the support structure.

“The physical installation of such a large screen is always complicated, especially in a central London pedestrian location,” said Warden. “Then there are the short lead times typically associated with the film premiere events.”

On top of these concerns, there were also the challenges associated with following COVID safety protocols, which limited crew sizes and work hours. Nevertheless, the IPS team prevailed.

They might not have possessed anything as powerful as Spice from Arrakis, but they did have skill, teamwork, and some very reliable all-weather video panels — and on this particular evening that was much more than good enough.