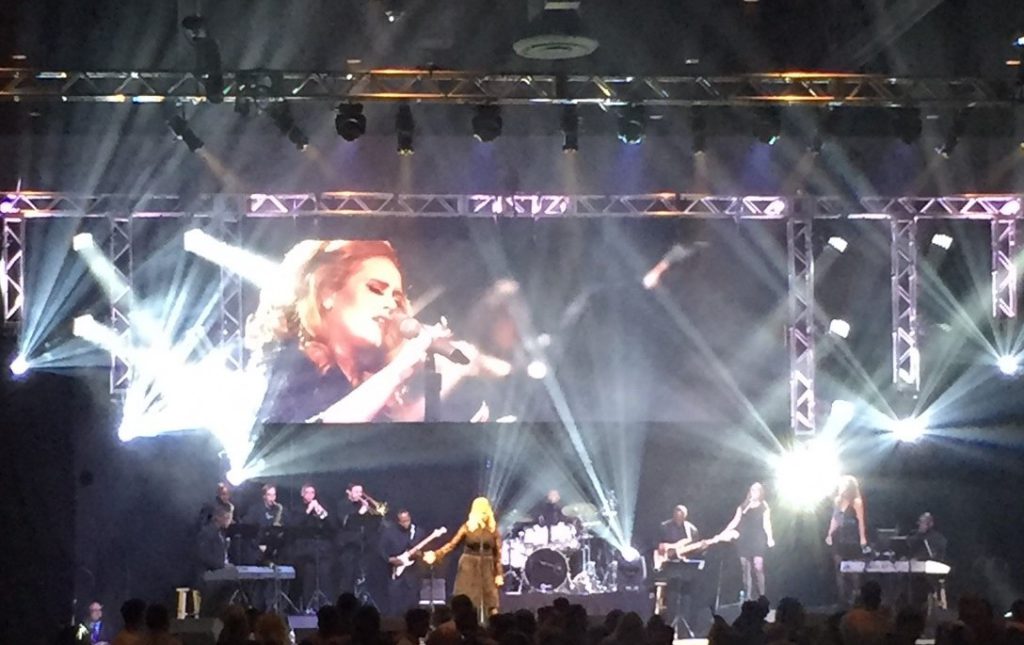 LANCASTER, SC – It’s become almost routine for Nutramax to earn praise for being one of the “best places to work” in the US.  There’s a good reason for this; the global maker of dietary joint supplements for pets and people, is known for its emphasis on supporting employees through team building. A good example of this is its tradition of all-embracing Christmas parties. These carefully planned affairs include bountiful food, beautiful decorations, top flight entertainment and, this December, a stunning light and video show by Image Productions Services, using CHAUVET Professional fixtures and LED video panels.

“We’ve done the Nutramax Christmas party before and it’s always a lot of fun,” said Tyler Lussier of Image Production Services, who designed the lightshow. “From an entertainment standpoint, this event — which was produced by Michael Yorkell (also of Image Production Services) — is much more elaborate than your average corporate party. Last year, the party featured Cirque Dreams Holidaze on stage. This year, there was a group of excellent tribute artists celebrating Elvis, Adele, Blues Brothers, Four Tops and Garth Brooks. So we approached this as if we were lighting a concert or show as well as a party.” 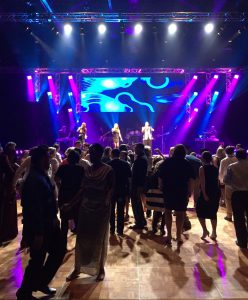 With this in mind, Lussier relied on a large number of Rogue, Q-Wash and NEXT NXT-1 moving fixtures to create dynamic concert looks on the stage. “Movement was important to conveying the right mood and drawing people into the performances,” he said. “We wanted to have light moving across the stage, in the air and out over the audience.”

Lussier used eight Rogue RH1 Hybrids, and equal number of Q-Wash 419Z-LED and 16 NEXT NXT-1 moving fixtures in the Nutramax rig. He positioned three of the Rogue RH1 units on the stage deck to use for aerial effects. The remaining Rogue and Q-Wash fixtures were flown on upstage and downstage truss and used for stage washing and audience lighting. A half dozen of the NEXT NXT-1 moving LED panels were flown on the upstage truss, while the remaining six were positioned on vertically oriented ladder truss that ran across the stage deck.

Moving the NEXT NXT-1 panels in sync with each other at multiple eye levels allowed Lussier to add a level of depth to the stage that made it seem larger, thereby engendering the concert feeling in the room. Contributing further to this depth were the eight COLORado 1-Quad Tour fixtures that were arranged along stage deck left and stage deck right to provide side washing.

Mounted on truss 8’-12’ off the deck and running across center stage was a 9’x 16’ video wall made of PVP X3 LED panels.  Created by Darren Lussier and Brian McNamara of Image Production Services, the wall displayed customer images fed to it by a VIP Drive 43s all-in-one video wall mapper/scaler/switcher.

Like the lightshow itself, the video images displayed conveyed a sense of excitement. There was, after all, plenty for the Nutramax team to celebrate at their 2016 party. Earlier in the year, at an event attended by South Carolina governor Nikki Haley, the company announced that it was expanding its Lancaster facility by 138,000 square feet and adding new jobs. As a result, there were even more people this year to enjoy the party — and a very extraordinary lightshow.