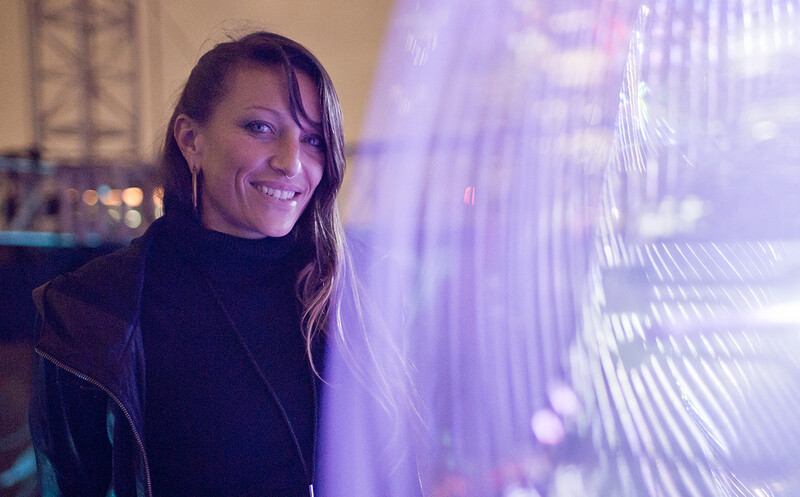 Our eyes are not intended only for seeing reality. Given the chance, they can also guide us to new, unexplored places where the imagination spreads its wings and takes full flight.

This Los Angeles-based designer and her team have been opening the window to this world since 2006. Bending geometric forms and light in novel ways, their designs at Coachella, Electric Daisy Carnival and a host of other festivals, as well as for tours and corporate events, have overturned convention to inspire greater visions.

Empowered by a new generation of tools, they have recently begun to push boundaries even further, by weaving virtual reality into their designs to create environments where gravity is defied, water is traversed upon, and extraterrestrial landscapes come vividly to life. 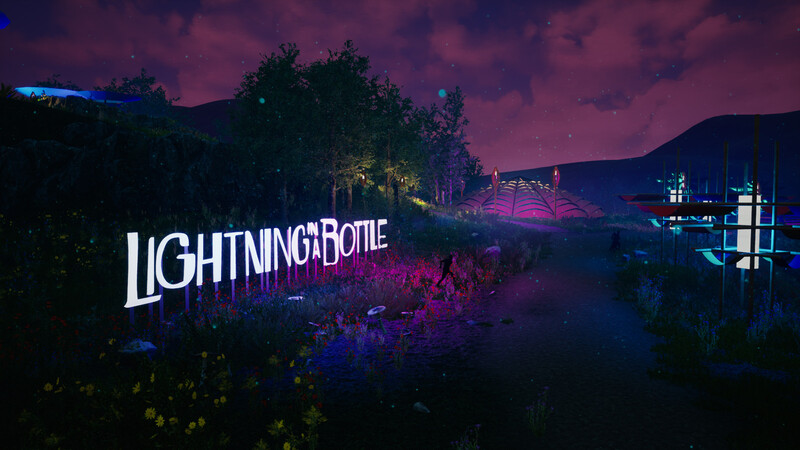 The power of their vision was demonstrated on Memorial Day, when they produced a virtual livestream of Lighting In A Bottle after the live version of the popular festival was canceled due to COVID-19 restrictions. Not only did they create an extraordinarily realistic 3D rendition of the event’s California setting, they also treated viewers on Twitch to unimaginably immersive stage vistas that would have been virtually impossible for the human eye to replicate in a live setting.

Vitas Motus, the name Shaw chose for the design firm she founded, is Latin for “Life Movement.” It is an apt metaphor, since she and her team have been constantly moving toward a place in the design universe where new forms of expression flower almost as if by magic. Their journey has led them to a point today, where, as quantum physicists like to say: “Reality is not what it seems… It is much more interesting!”

Speaking to us from her studio, where she serves as Creative Director and CEO, Shaw shared her insights on how design can liberate reality from its own confines. 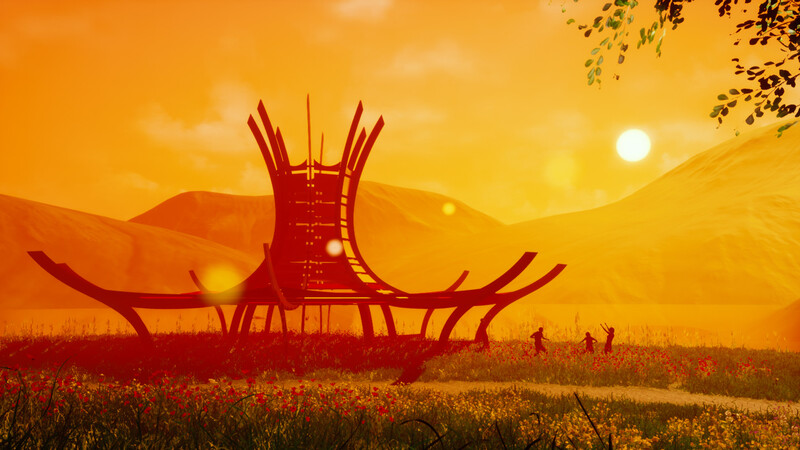 The abstract patterns you’ve used to such great effect for Kaskade at Coachella, at EDC’s Basspod and other projects create an immersive sense of dimensionality on stage. How has this experience aided and/or influenced you when creating 3D landscapes for projects like the virtual Lighting In A Bottle (DGTL LIB)?
“Striation, repetition, and implied linearity are common design methodologies we employ to guide the audience’s eye through the dimension of our work, while affording as much negative space as possible. This allows us to fill that negative space with atmosphere, lighting, and other theatrical effects that complement the vision. The virtual space is no different, though with fewer limitations. The Water Temple, our new stage debuted with TOKiMONSTA’s performance, floats weightlessly above a lake, and the stacked wooden repetitions imbue it with volume. Very few lights were needed to bring these structures to life due to this volumetric repetition, as shadows fell easily over each layer.”

You used a gaming engine for DGTL LIB. What advantages did this offer you in terms of the design process?
“We regularly use the Unreal Engine as a pre-visualization tool in our design process, building out the structures virtually, so the clients can feel what it’s like to be in the space. This was an extension of that typical use case — and our level of comfort with the gaming engine made the DGTL LIB world creation much easier.”

Looking at this from the design process, does working in a virtual format on a gaming engine offer you more creative options than working an ordinary livestream that is merely videoed?
“Absolutely. The possibilities are endless, as it allows us to design outside the limitations of gravity and engineering. We’ve virtually created space jungles on extraterrestrial planets, replicated the surface of Mars, and even built a stage that hovered over a lake. 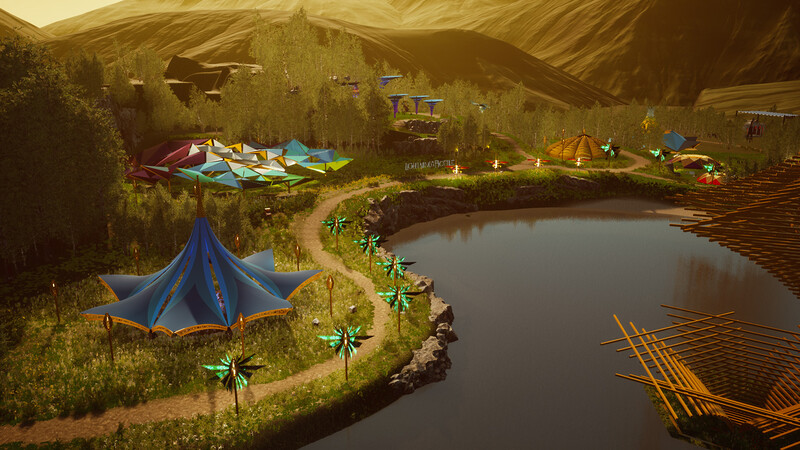 “For DGTL LIB specifically, we wanted to insert dancers from the community into the virtual 3D scenes of these featured performances. The dancers recorded themselves from home and were then integrated into the virtual space, as they all mingled on the digital dancefloor with silhouetted virtual avatars.”

So, is it safe to say that the virtual design process offers you more creative freedom than designing a live event stage?
“We’re inspired by this time in the virtual space because we find more freedom in creation with less constraints. This has also started to re-inspire our work in the physical space, and in the future, we hope to bring some of these virtual structures into the physical world.”

The artists at DGTL LIB look like they’re appearing in the actual festival environment, but of course they are not. Can you tell us a bit about what the artists experience as they perform? Where are they? What is around them?
“The artists captured the green screen performances from their houses or empty studios. Green screen tech is widely available at this point, and anyone can set it up at home, provided they have a good camera. In either scenario, the artist is surrounded by a greenscreen, multiple lighting rigs, and depending on the complexity of the shoot, multiple cameras as well.

“We will also start incorporating depth sensing cameras and new products / phones that come to market which make it easier to edit out the background and teleport to virtual dancefloors. The goal is to see how we can use this tech to increase fan engagement during this time.” 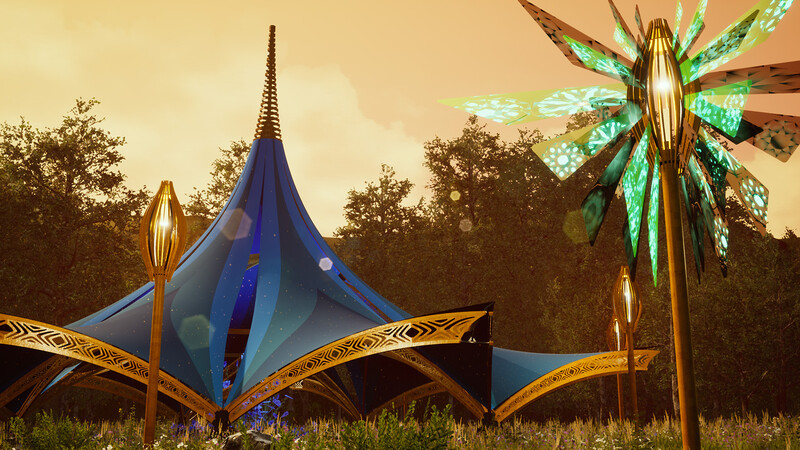 Since the artists are not on a real festival stage where they can feed off a crowd, how do they get psyched up for their performances? Is there anything you can do to psyche them up?
“For DGTL LIB, there was a Zoom dance party integration that allowed the audience to participate in the festival. Many of the artists watched this Zoom on a monitor in front of them as they performed, so they were able to see the real time reactions of the crowd and feed off their energy. This also was particularly effective for DGTL LIB because of the strong sense of community amongst festival goers. Many familiar faces were in the Zoom dance party which created a reunion of sorts.”

Many of the artists at a major festival have their own lighting designers. So, generally speaking, how do designers interact with the virtual environment you create?
“We have a prototype solution that allows the lighting designer and programmer to remotely activate the lights in our Unreal scenes, either ahead of time or live with our console.”

From a lighting design perspective, how does lighting something like DGTL LIB differ from lighting an ordinary livestream?
Lighting design within a game engine is part of a formula, dialed in to meet optimization requirements. We are simulating physical behavior, and currently the technology isn’t perfect. We have to rely on our understanding of how light functions in the real world while navigating the shortcomings and advantages of these simulations. 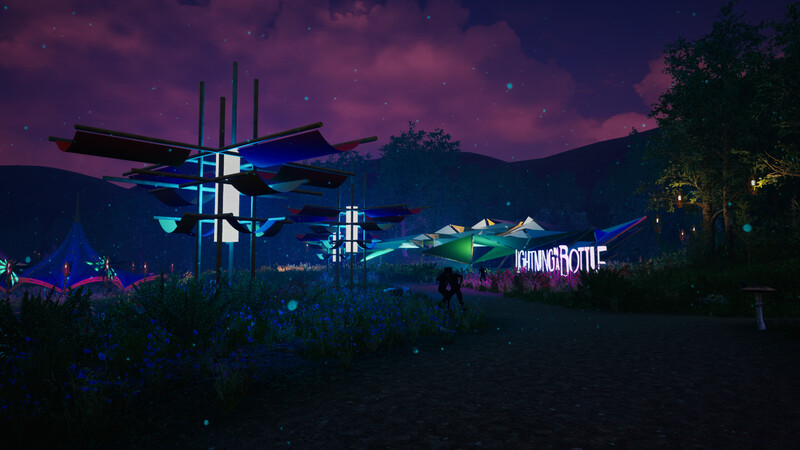 “We can change the time of day, haze level, or arrangement at any time, but, for example, the artists are 2D planes, and do not volumetrically take light as beautifully as they would in 3D. Light shafts do not propagate as elegantly either, so we are constantly exploring “tricks” to imply reality.

“In addition to the stages, we built an entire festival world to immerse viewers in the experience. This world required wayfinding lighting along paths and scenic lighting in trees in order to accurately depict LIB at night. It was a challenge to keep the formula balanced while having hundreds of lights simultaneously acting in one scene, running on one GPU.”

Is there any busking at a virtual livestream?
“Yes, we have a prototype that makes this possible — EDM BETA LIVE LIGHTING.
We’ve successfully connected lighting designer Imaginary Lights to our virtual space, sending ArtNet cross network to control virtual lighting fixtures via DMX control.” 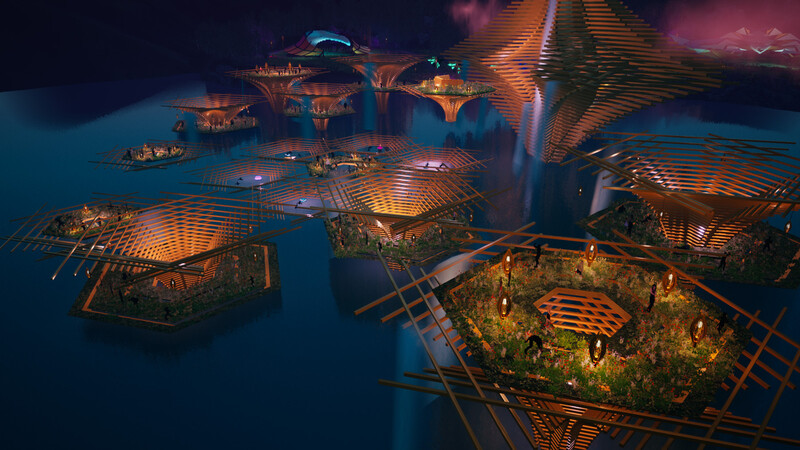 Can you tell us about the role LED video walls and projections play in something like DGTL LIB?
“Our collaborators at Strangeloop Media responded to TOKIMONSTA’s set, cueing mesmerizing visuals and strobes. Applying these visuals to the stage followed the same pixel-mapping process we would use for a real show. We also applied audio-reactive algorithms to each light in the world and to Shiba San’s upstage wall, which can be seen pulsating to the BPM of the music.”

It seems like a really cool thing about designing something like DGTL LIB is the freedom to choose colors for the background environment. How do you select colors? Do you try to be as realistic as possible, or do you stray from reality a bit for the sake of creating a more evocative image?
“We aim fairly close to reality, but with a few color enhancements, similar to what a photographer might enhance in a photo. LIB’s colorful structures and vivid aesthetic called for the environment to have subtle shifts from photo-real, but we employed several checks to ensure the balance between reality and style was kept.”

Eventually, the pandemic and lockdown will end. When that happens, what kind of balance do you see taking place between virtual shows like DGTL LIB and live concerts?
“We cannot wait to get back to live events, but until then, we’re excited to continue utilizing these digital tools to bring excitement and storytelling to audiences everywhere. While digital experiences will never replace live events, the opportunities to enhance and augment them with integrated technology is, we believe, the future of fan participation.” 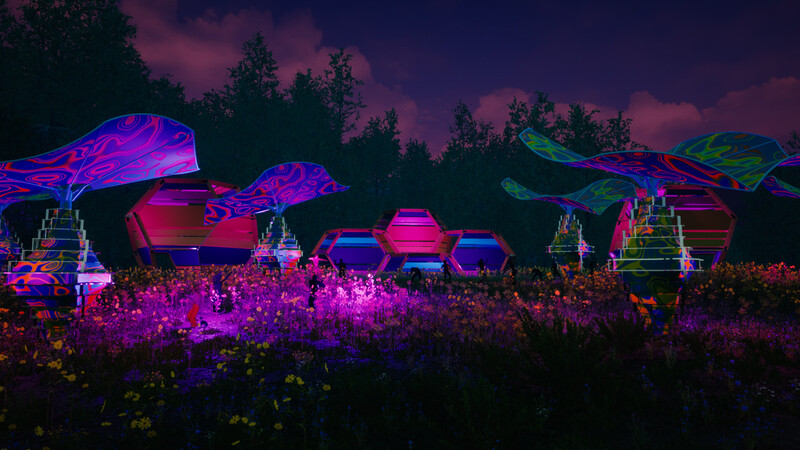 Do you see the emergence of virtual shows like DGTL LIB changing the way live shows are designed?
“We hope this virtual space becomes a more permanent addition to general entertainment programming where we can continue to introduce festival content curators into broadcasting. We also hope this evolving virtual space can help to recreate industry jobs. Many of our artist clients would love to continue collaborating with the established teams they’ve been working with for years, and we want to support the process of getting them all into this virtual space together.”

Speaking of collaboration. We know that it has become increasingly important in the design process. It seems like virtual livestreams have taken collaboration to a new level. Is that a fair assessment? Can you give us an overview of the collaboration process, who does what and how is it all coordinated into the final creation?
“The fully EDM Beta live performance came together remotely with DJing, VJing, capture, camera work, and lighting real time from various locations across the globe. We created this live entertainment solution in the time of limited physical interaction with a green screen captured DJ and multiple tech teams working from their respective living rooms around the world.”

Which part of a live show is most difficult to capture in a virtual livestream?
“Definitely the audience participation. At this point, there is a gap in communication between the artist and audience. The Zoom dance party integration is a great jumping off point, but we’re inspired to dive deeper into the virtual possibilities.” 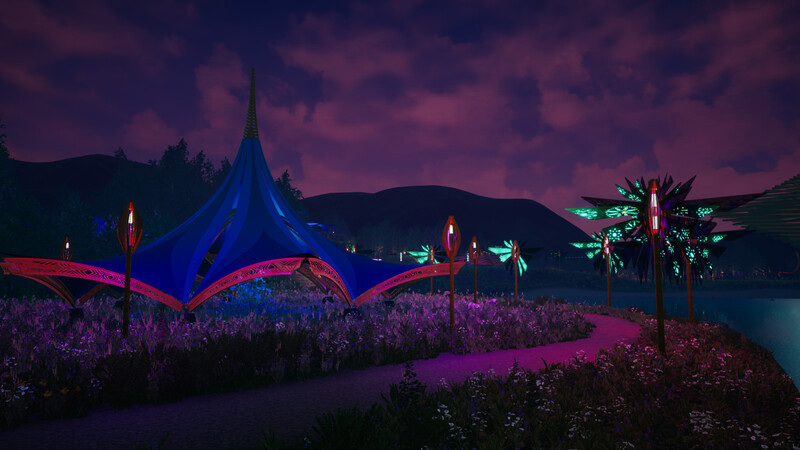 How do you envision making progress in capturing that aspect in your designs in the future?
“We are currently working on real time audience into the virtual space, though I can’t elaborate further. ;)”

When you started out in your career, did you envision anything like DGTL LIB? How has the arrival of this technology changed your perception of your role as a designer?
“When I began my career, I was designing concept cars, so I was often working in real time rendering engines. At Vita Motus we use these same tools all the time for client pre-visualization, so it’s not really the arrival of the technology, so much as a refocusing on it to make it audience facing. Being on the forefront of this shift has allowed us to think bigger, expand our perception of possibilities, without limits to design and audience reach.”