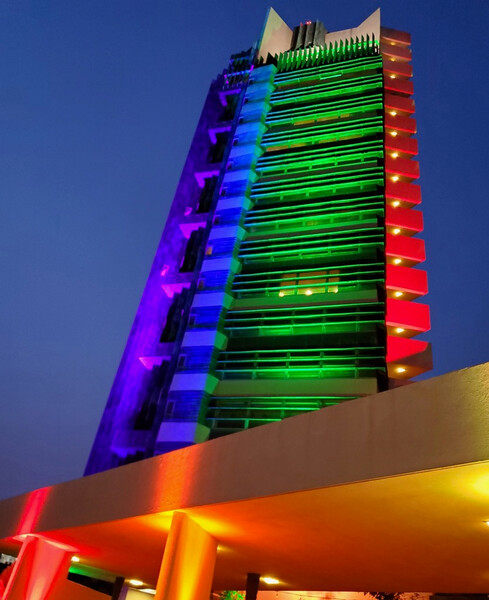 BARTLESVILLE, OK – When explaining how he designed Price Tower, Frank Lloyd Wright described it as a “tree-like mast” supported by a central trunk of four elevators shafts anchored by a deep central foundation. The ingenious arrangement made it possible for the building’s 19 concrete floors to extend outward like cantilevered branches of a tree reaching over 220-feet to the sky.

Today, 64 years after its completion, the only skyscraper designed by Wright inspires as powerfully as ever, reflecting its creator’s belief that “all fine architectural values are human values.” This spirit was celebrated in September when the iconic building glowed in vivid colors in honor of PRIDE Month with help from a collection of CHAUVET Professional fixtures supplied by GW Illumination.

“This project was initiated by the Bartlesville Chapter of Oklahomans for Equality for PRIDE Month,” said Price Connors, Education and Outreach Specialist at the Price Tower Arts Center. “The City of Bartlesville proclaimed Bartlesville PRIDE Month in September (postponed from June, because of COVID-19), and Price Tower Arts Center graciously supported their wish to light the Tower in a show of support. Marty Smith and Rick Lloyd were also essential to this project, which was the only building in the world designed by Frank Lloyd Wright to be lighted in PRIDE colors.” 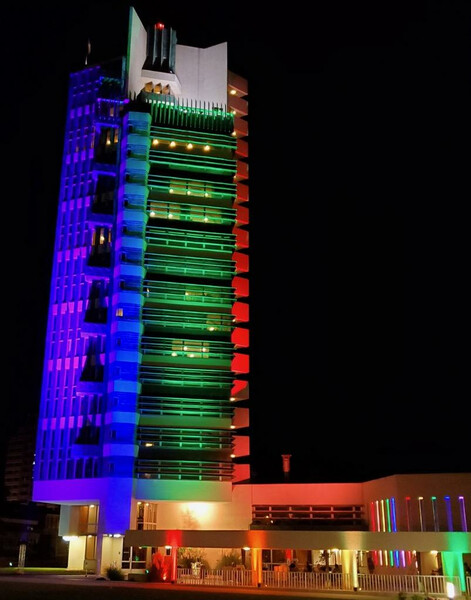 Ironically, the many of the distinctive features that endow Price Tower with its power to inspire, presented challenges to the design team, which was led by John Gasche, Technical Director of GW Illumination.

“Price Tower is a masterpiece, but from a lighting point of view, it’s not an easy building because of its many different faces,” said Gasche. “Our project included four of the nine distinct faces of the building, including a 13-story vertical wall of windows with vertical copper louvers between each, and balconies that jutted out from the face every other floor. Also included in the project were a column of bay-like windows that divided the horizontal wall of windows with horizontal copper louvers, and a 19-story outside staircase.”

To compound the issues, our color scheme had to account for the building’s green weatherized copper tint as well as the light loss from the horizontal louvers that occurred when the light projected upward. “John Gasche’s knowledge of how light reacts on various surfaces was a key element to the project,” said Chris Wilson, the project’s primary lighting designer.

Helping the design team meet these challenges was an impressive collection of CHAUVET Professional fixtures that included four COLORado Panel Q40 units positioned at ground level on 9-foot trusses and placed on the flat roof of the canopy; two COLORado 3 Solo zoomable washes placed at the base of the Tower; one Ovation E-910FC-IP color-rendering ellipsoidal placed on 9-foot truss below the triangular staircase; and two COLORado Solo Batten 4s placed on the roof of the canopy facing the tower. 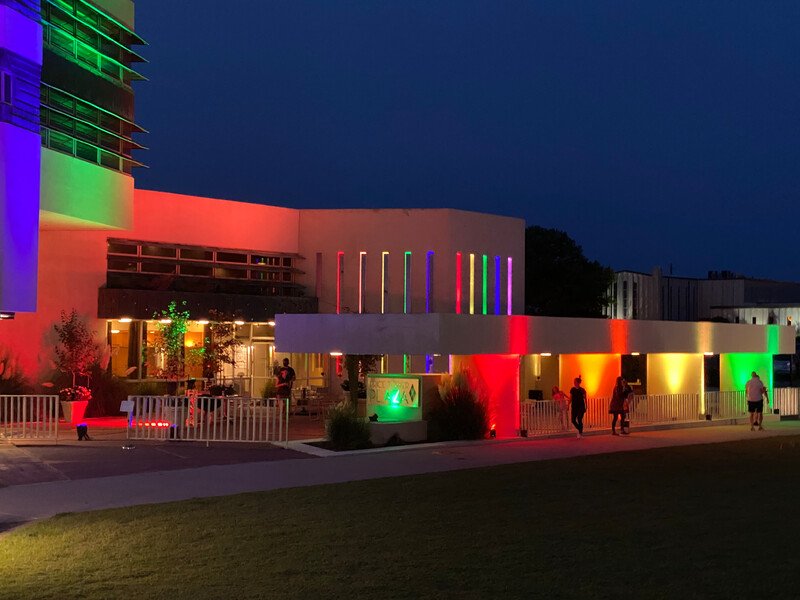 Wilson described how the GW Illumination team created an engaging balance of colors throughout the multi-dimensional building. “Our goal was to achieve a more harmonious color scheme, using the PRIDE colors,” he said. “We chose to begin with violet transitioning to blue and green.

“The COLORado Panel Q40 has been our number one choice,” continued Wilson. “It’s a phenomenal fixture because of its long throws, sheer power, and exceptional color mixing abilities. We used it to uplight from the ground and canopy top. The section of the building dividing the vertical from the horizontal louvers was hit with COLORado 3 Solo fixtures zoomed to the narrowest 8° beam in a deep blue that created a demarcation between the two harmonious colors on the louvered sections of the building.”

Also contributing to the color-scape was the Ovation E-910FC IP RGBA-Lime ellipsoidal. The design team used a 14° Ovation Ellipsoidal HD Lens tube with the fixtures and shot a vivid red up the triangular staircase as a complimentary color to the green. This gave it the punch it needed to stand out from the rest of the building. The framing shutters of the fixture helped to cast a sharp divide between the colors.

The impressive lighting display covered the entire length of the building. GW Illumination’s design team relied on the vertical louvers to act as channels for the light to project up the Tower.

“Having angular balconies every other floor created a break that provided shadows of interest,” said Gasche. “However, the horizontal louvers where a greater challenge. The louvers stopped the light from being projected higher on the building. In addition, we had to step back the fixtures from the building without creating hot spots. It was a delicate balance with color and intensity.”

There were also areas of the building that provided for added expression such as the gallery area and the outside Price Tower Plaza, an outdoor restaurant where tall narrow windows slits provide for distinctive architectural emphasis.

“The windows are a unique architectural feature that begged to be lit in the color spectrum,” said Wilson. “Originally, the ground floor narrow slits were windows of the caretaker’s residence. The longer narrow open slits at the second story were originally the location for the HVAC units. Instead of a big block of color that blended together on the Tower we wanted to transition to individual PRIDE Colors that stood on their own.”

Those colors did indeed stand on their own, as did the rest of the lighting design. Working in concert with the free-flowing design of this uplifting edifice, the statement they made was clear for all to see and celebrate. 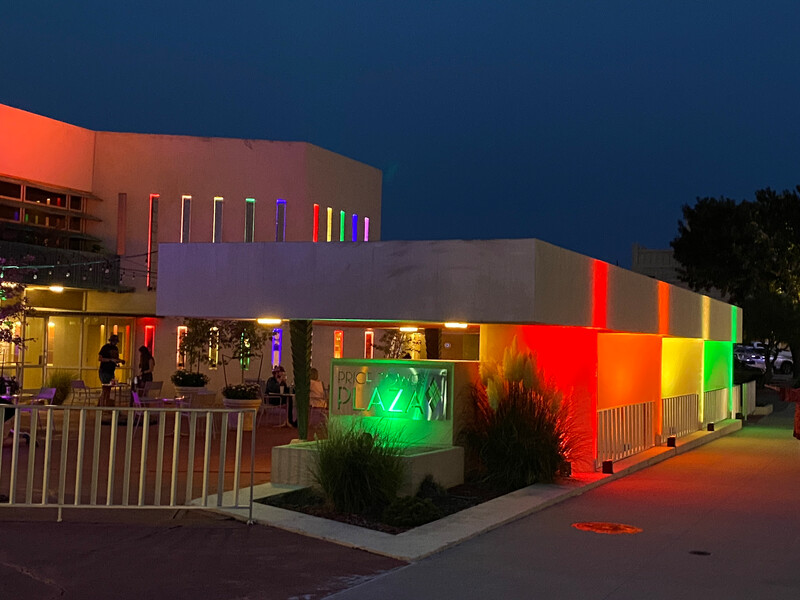