PILTON, UK – From its very beginning, the Glastonbury Festival of Contemporary Performing Arts has done a masterful job of blending different genres and eras into a single sweeping immersive experience. How else to explain, a festival where artists as diverse as Tony Bennett and Deadmau5 (not to mention David Bowie, The Rolling Stones, Paul McCartney and Pharrell Williams) are equally at home on stage? The same diversity has also characterised the festival‘s stage lighting. This was very evident at Glastonbury 2016’s WOW! Stage and Circus Big Top, where Fineline Lighting, complemented some traditional effects with a variety of dynamic new looks created with CHAUVET Professional’s Rogue R1-FX-B and Maverick MK2 Spot fixtures.

Fineline specified 16 Rogue R1 FX-B blade-style fixtures for the WOW! Stage, which was located in Glastonbury’s Silver Hayes area and featured EDM and DJ artists. The company used 10 Maverick MK2 Spots at The Circus Big Top, where concert music gave way to stage performances by Pirates of the Carabina, Yvette Dusol, Eric McGill,  plus many other acts. 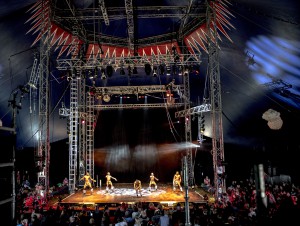 Although the two stages featured very different forms of entertainment, Fineline Lighting was committed to giving each a fresh new look. “We have been working at Glastonbury for many years; it’s the largest green field festival in the world and has always been a very diverse festival in terms of both the acts and audience, catering for all tastes from Theatre through to EDM” said Rob Sangwell, Fineline Lighting Project Manager.  “It’s important that we keep our stages fresh in terms of the visuals; we need to fulfill the brief for each show, which is obviously very different over at the WOW! stage when compared with the Circus Big Top. It’s important to select the right kit for the right job; it’s definitely not a one-size-fits-all situation”

The Rogue R1 FX-B fixtures on the WOW! Stage delivered the captivating excitement that the Fineline Lighting team was seeking. LD James Harrington and his team positioned the 16 Rogue fixtures in four equal rows that were fixed to vertical downstage trusses.  By doing this, they were able to achieve completely new and refreshing looks by utilizing the R1 FX-B’s infinite rotation of both pan and tilt for its 5 individually controllable heads, each powered by a pixel mappable 15 W RGBW LED. 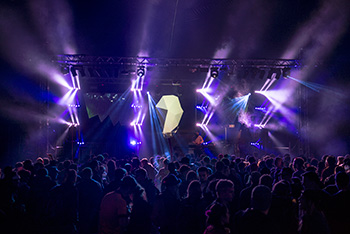 “This was the first time we incorporated the R1 FX-B into any of our projects– and what an impression they created!” commented Sangwell. “The crowd were going absolutely crazy for the music and visuals.“

While the R1 FX-Bs offer incredible brightness and powerfully vivid colors, the combination of 360° rotation and individual LEDs gave the Fineline team a completely refreshing arsenal of looks to play with, much to the delight of the thousands of clubbers at the stage. “The individual pan and tilt of the R1 FX-Bs provided our lighting operators with an incredible energetic tool, ideal for key moments within DJ sets to accentuate drops and climactic points,” said Sangwell. “Among the favourite looks were the 180° crisscross panning effect, and everyone loved the fact that these fixtures definitely pack a punch!” Fineline also specified eight CHAUVET Professional Rogue R2 Beams for the WOW! stage, positioning them on overhead trusses at the front and rear of the stage in rows of four.

“We’re a great fan of the Rogue series, especially the R2 Beams,” added Sangwell. “With the split beam, 8-facet rotating prism and great output, the R2 Beams are our go-to moving heads for this type of show. For this particular event, they provided that extra punch we needed for aerial and crowd directed beams.” 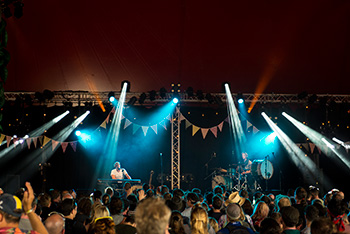 Weaving concentrated beams of light in and out of lattice of color thrown into the audience by the R1 FX-B fixtures, the combination of the two Chauvet fixtures was both minimalist, intricate and intensifying, and certainly added to the euphoric (not to mention muddy) authentic club experience had by the festivalgoers.

Meanwhile at the 3,000 capacity Circus Big Top, the Fineline Lighting team was relying on the new Maverick MK2 Spot fixtures to create a show atmosphere.  “We needed a decent spot fixture capable of subtle theatrical gobo work as well as more dramatic effects.  All shows in the Circus Big Top are rehearsed and programmed in advance, so consistency of movement, positioning and indexing of gobos is important,” said Sangwell. “The Maverick was good and bright, with a great flat field and offered us a whole arsenal of color and gobo effects plus a fantastic zoom.” 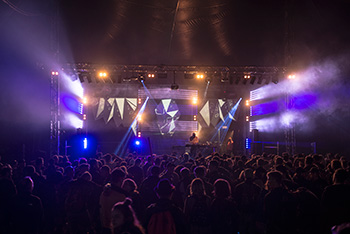 One of Sangwell’s considerations in specifying a suitable spot fixture was brightness. Luckily, the Maverick didn’t disappoint. Hung from overhead truss, the fixtures could be seen both casting glorious swathes of light onto the performers on stage below and creating great aerial effects above. LD James Loudon and head tech Jonnie Westall were both very pleased with the results.

With performers both on stage and performing aerial acrobatics, the Mavericks worked in unison to provide both stunning and subtle looks for what is essentially a very theatrical show.  The gobo effects from above were particularly good, and really drew emphasis onto the whole stage area.

While it may have been the first time that Fineline incorporated the Maverick spot into a lighting rig, their performance during the festival didn’t disappoint.

“This was the first time we used the Maverick spots, and we were impressed by their versatility,” continued Sangwell. “They certainly offer much more than we had expected, and as such we’re already thinking about the possibilities this fixture could bring for upcoming future projects.”

With the WOW! And Circus Big Top stages, Fineline has well and truly mastered the art of creating credible stand alone venues with formidable reputations of their own within the larger macrocosm of the Glastonbury festival. Although at opposite ends of the spectrum – both thematically and demographically – the WOW! and Circus Big Top stages are united in the sense that both benefitted enormously from their lighting designs, both of  which served to maximize the experience had by festivalgoers within the respective stages – a concept that has long been at the heart of the Glastonbury philosophy. 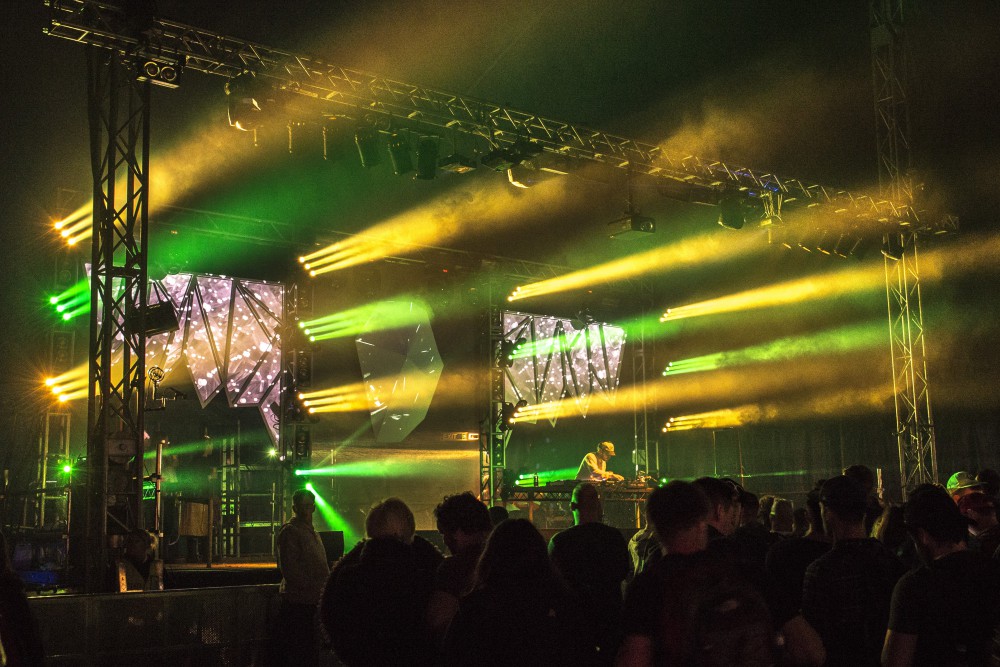