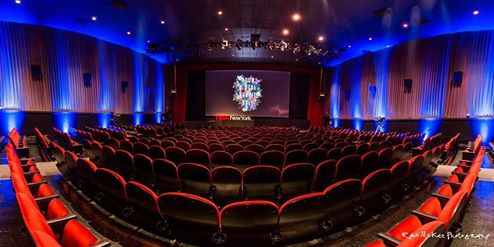 NEW YORK – A priest, a rapper, an LGBT artist, an Ivy League business school chairperson, a violinist and 13 other achievers from wildly different fields walk into an elegant theatre . . . The beginning of a joke? Not at all — it’s the list of presenters at the TEDx New York Keynote Series “Down The Rabbit Hole,” which took place recently at Manhattan’s elegantly appointed SVA Theatre.

Part of the world-famous TED Talk series, this annual event is dedicated to exposing people to the widest possible range of thought-provoking ideas. The 18 TEDx New York talks were kept relatively short (under 18 minutes) to make them readily accessible to a large audience. TEDx organizers also made the talks highly entertaining by retaining engaging speakers and creating a warm atmosphere throughout the venue. Contributing to the latter was an inviting lighting design from Emergency Production that featured 36 COLORdash Par-Quad 18 fixtures from CHAUVET Professional that were supplied by JDI Productions.

“We used the COLORdash Par-Quads as uplights against each side wall for the General Session, and in the hallway leading to the theatre,” said Chris Hubbard, owner of Emergency Production, who served as production manager of the event. “The uplighting really helped define the architectural elements of the theatre, making the room seem larger and warmer at the same time.”

For most of the general sessions, the COLORdash Par-Quad 18 fixtures were used to project royal blue light on the theatre’s draped walls and the overhang that ran along each side of the 479-seat room. By drawing on the amber LEDs in the RGBA COLORdash units, the Emergency Production team was able to render true versions of this blue.

Hubbard, who has been providing full production at TED events for close to a decade, was pleased by the way the COLORdash Par-Quad 18 fixture blended into its environment during the event. “The color and output were crisp and bright in keeping with the nature of this TEDx talks,” he said. “We were also very pleased with the low profile of the COLORdash Par-Quad. People want the light for ambience, so you don’t want the fixture itself intruding.”

JDI Productions’ Pete Therrien linked all the COLORdash Par-Quads by DMX. In addition to the COLORdash units, the TEDx New York rig included Fresnels and ellipsoidals. “It’s amazing how with just a few lights on stage and the COLORdash units for uplighting, Pete was able to create a more engaging atmosphere in the entire room,” said Hubbard.

In its mission statement, TED (Technology Entertainment Design) declares that it is dedicated to promoting “ideas worth spreading.” One such idea that perhaps might get the group’s attention one day is that a quality LED lighting system makes any presentation more engaging.