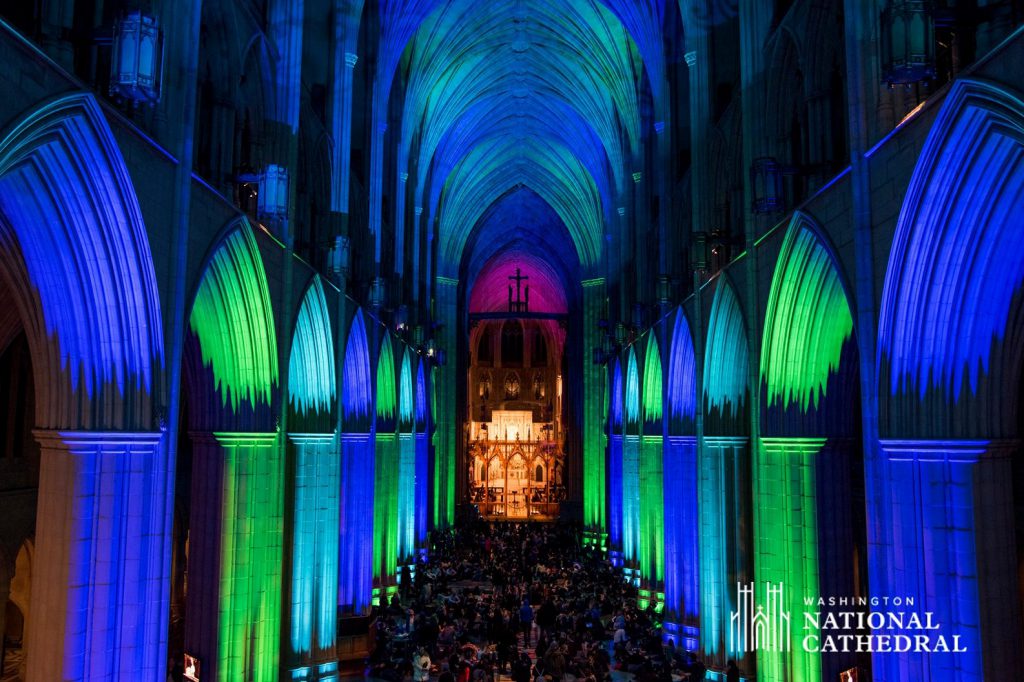 WASHINGTON, DC – Beach blankets and yoga mats aren’t normally found inside the long, high-ceilinged central nave of the National Cathedral. Recently, however, the iconic church’s usual seats and pews were removed so people could lie down on these coverings to gaze at an astonishing lightshow that transformed the building’s cavernous interior into a vast and infinitely fascinating panorama of color with help from a collection of WELL Fit LED fixtures from CHAUVET Professional.

Elizabeth A. Coco of Atmosphere Lighting designed this transformative vista for the cathedral’s Seeing Deeper, an event its organizers say was intended to help people “find new paths for creative expression and spiritual freedom.” Live Native American flute music accompanied the two-hour lightshow to create an environment that was true to the organizers’ goals.

“Atmosphere Lighting and I have been working with the National Cathedral for some time lighting various events,” said Coco, a USA 829 union designer. “When the cathedral reopened in October after being closed because of damage caused by the 2011 earthquake, its new event director, Dan Rose came to me and said they were thinking of something on a large scale where they would light the interior in different colors for an event.” 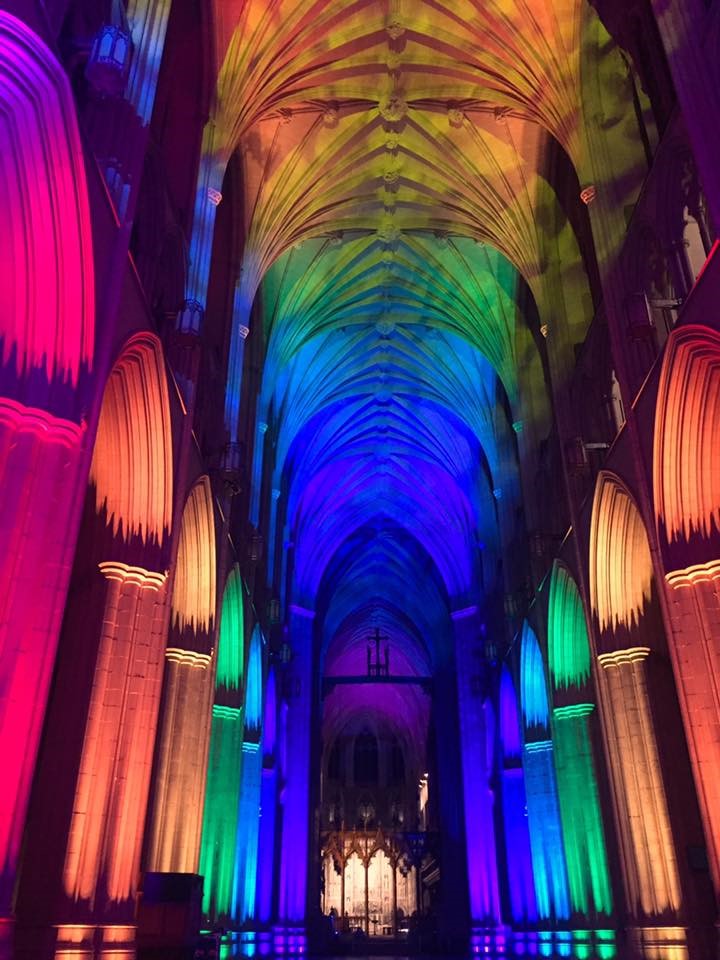 Coco donated her design services for the nonprofit event, while Atmosphere Lighting provided the gear at no cost. “For me as a designer, Seeing Deeper was like a dream come true,” she said. “The cathedral has so many wonderful architectural features. Plus, the stained glass windows give you such a rainbow of colors on their own. I was looking forward to playing off them with the lighting.”

With the majestic gothic-style cathedral as her canvas, Coco painted her light scape with 146 fixtures, including 32 ellipsoidals, 24 battens, 8 beams, 4 washes and 78 WELL Fit battery powered RGBA uplights. “I killed all the chandelier lights, and focused the ellipsoidals at the floor to display gobos and colors that complemented the sunlight shining through the windows,” she said. “The spot fixtures were positioned on the floor of the balcony to colorize the ceiling. For wall washing in the balcony area, we used our battens.”

Key to Coco’s design theme was the seemingly never-ending flow of changing hues on the cathedral’s buff-colored Indiana limestone columns. She created this look by positioning her 78 WELL Fit fixtures at the base of the columns that lined both sides of the central nave.

Being battery powered with wireless control, the WELL Fit fixtures provided Coco with a safe and efficient way to light the columns. “We were able to put the WELL Fits right up against the columns without worrying about wires or power cords as a trip hazard,” she said. “They were easy to control for color changes, and the battery power run time was more than enough for this event.”

Beyond the “practical benefits” offered by their battery powered and wireless features, the WELL Fit fixtures also fit Coco’s creative vision with their true color rendering.  “The amber LEDs in the units were crucial,” she said. “If you use an uplight without amber diodes on columns like these, it makes you want to cry.  You get the chromatic aberration and the weird color rings it projects when too close —really, it makes you want to cry. With these units, though, we got excellent colors.”

Coco created a rainbow of colors during the Seeing Deeper event. However, she avoided rendering these hues in a predictable rainbow order. “I wanted the color changing to be harmonious and flowing, but also surprising, so I didn’t want to be predictable,” she said. “My design started with the colors on the columns, then I went to the moving lights. We broke up the colors with different movements and gobos. My preprogrammed lightshow looped, but as people came up to me and made a request — like nebulas on the ceiling — I would pause the loop and add a few cues.”

Among its many unique characteristics, the National Cathedral holds the distinction of being the tallest structure in Washington, DC. (Its Gloria In Excelsis Deo tower is 676’ above sea level.) Reaching the top of the columns inside the church was no issue for the ground-based WELL Fit units.

“It had to be 50’ or more up to the top of the columns, but we had no issues,” said Coco. “The throw distance of the fixtures was fine. We were able to reach the ceiling and immerse the entire room in color to create something that was truly special.” 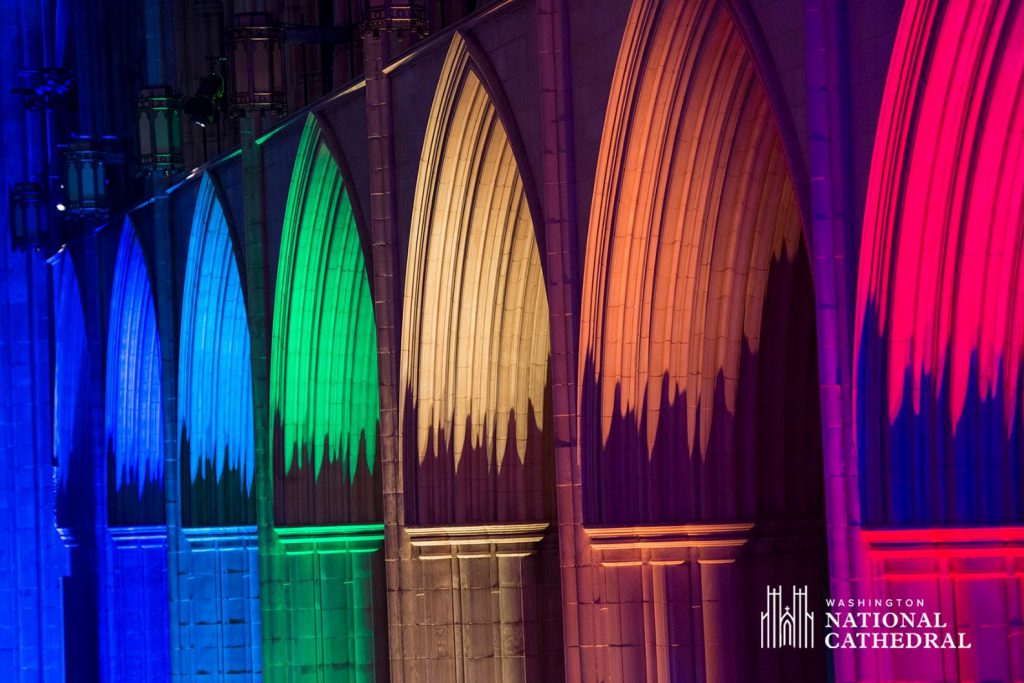 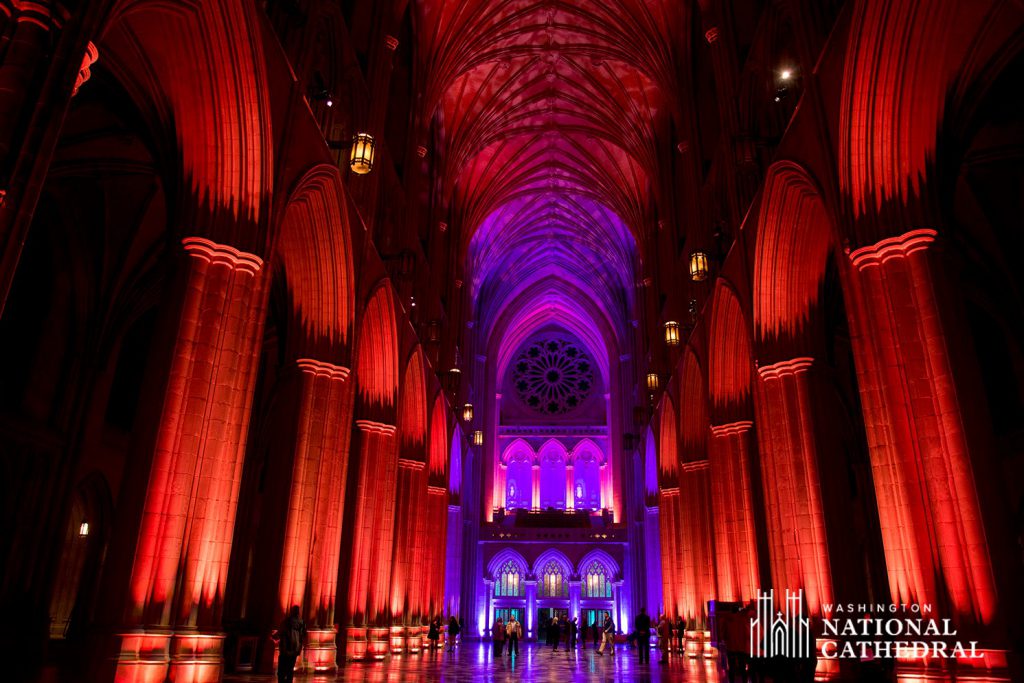