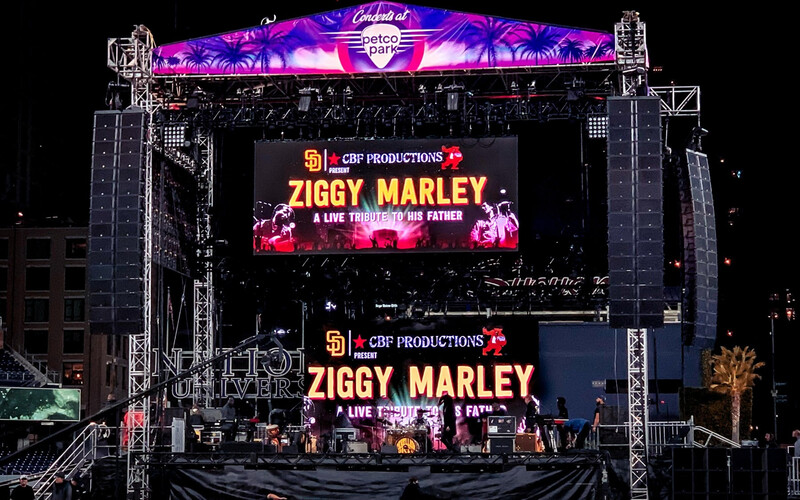 SAN DIEGO – Last year, during the height of the pandemic, Martin Castañon, Victor Ortiz and the team at Darvik Productions stayed busy, while bringing the joy of music to the public by running “Concerts in Your Car,” a series of drive-in shows at the Ventura County Fairgrounds.

In the process they learned quite a bit about teamwork, determination and self-reliance. They also sharpened their skills lighting an elevated 360ﹾ stage. All of these attributes came in handy this Memorial Day Weekend, when they handled the production of Ziggy Marley’s concert at Petco Park.

Although the socially-distant live audience at this show was seated in pods, rather than cars, the configuration of the performance area and the sprawl of the crowd, required the same kind of elevated open stage that the Darvik team had used for their drive-ins. Working closely with Joël Huxtable, Ziggy Marley’s programmer and operator, Castañon, Ortiz and lead light tech Miguel Ochoa delivered a warm, emotionally powerful show.

Despite having the stage situated in the middle of the field at a 42,000-seat baseball park with limited fans in attendance, their engaging blend of video, light and gobo patterns created a sense of intimacy the enveloped the entire stadium, as the eight-time Grammy winner paid tribute to his late, legendary father.

Helping them set this beautifully balanced mood was a collection of 57 CHAUVET Professional Rogue fixtures from Darvik’s own inventory.

“The Concerts in Your Car design was the starting point for this show,” said Castañon when describing the 40’ wide by 20’ deep by 7’ high stage with a roof reaching 45’ in height. “We just decided to ditch the circled truss in the middle that we used for the drive-in concerts and went with a pre rigged upstage mid stage and downstage.

“Our stage here actually had four video walls, one on each side, one on the upstage for content, and one for IMAG on the downstage,” continued Castañon. “We also sent a video/audio embedded feed into the stadium’s video processing. This allowed us to send the IMAG to the stadium’s video wall and also distribute the concert throughout the whole venue. So, if you would go to the restroom or walk inside the venue you would be able to see and hear what was going on, which helped connect everybody to the moment.”

Also contributing to the sense of intimacy that permeated the stadium were the gobos from the rig’s 12 Rogue RH1 Hybrid fixtures flown on upstage and midstage truss that Huxtable, directed at the stands and empty infield. “Most of the audience was pretty far back from the stage, so it was important to fill the space between them,” he said. “I went with gobos that fit the mood of each song. Big movements and flouts were also a must to connect fans to the show.”

Being outdoors on a gusty day, the design team couldn’t use foggers. Instead, they relied on patterns from their hybrids to create texture on stage. “The hybrids worked great on the stage deck and in-field out front,” said Huxtable.  “With a temp fader and movement, I could spill that up into the stands to pull the whole venue together.”

“We utilized the big face of the R3X Wash to create rich and stunning color effects for the audience, while relying on the R2X Washes for extra eye candy,” said Castañon. “The fixtures had plenty of punch to light the concert area from these positions.”

Also in the rig were 16 Rogue R2X Beam fixtures, which were arranged in a line on the ground about 100-feet behind the rest of the rig. “The R2X Beams really made the rig look way bigger than it actually was,” said Castañon. “Just when you thought there weren’t any tricks left in the bag, these fixtures would surprise you. They looked impressive on drone shots and were great for tracking.”

As the fog rolled into Petco Field as the sun went down, Huxtable turned to the R2 Beams to add an extra dimension to the show. “The R2 Beams really helped make the show ‘stadium big’ in the fog,” he said. “It was quite fun to see those beams flying around behind the stage. The venue used drones for big wide shots, so the whole stadium looked awesome. It was a fun show.”

The fun wasn’t just for the fans on this May night, but also for the production crew and Ziggy Marley himself, as it was his first live concert since the pandemic began. Celebrating the 75th anniversary of his father’s birth, he did a complete Bob Marley set from the 1970s, making the return to live concerts even more special for everyone lucky enough to be at Petco Park on this May evening.