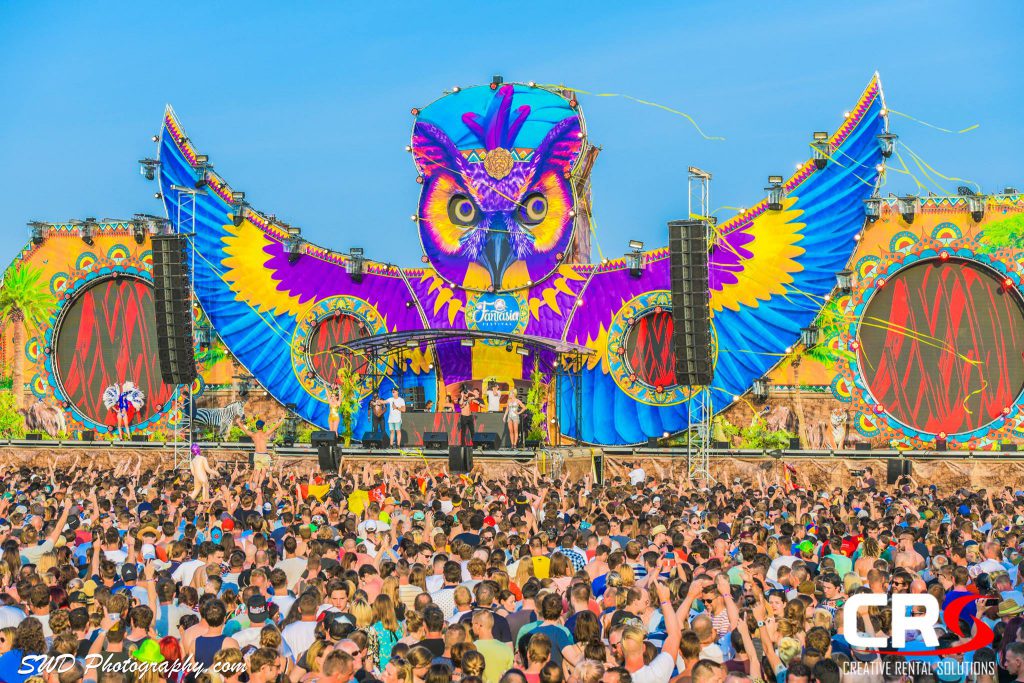 ZOGGE, BELGIUM – To the ancient Greeks and Romans, the owl was a symbol of the goddess Athena, and as such the nocturnal bird became associated with wisdom. For fans attending the 2018 Fantasia Festival, however, the avian sage took on a whole new meaning, one centered around pure EDM, trance and house music excitement from stars like DVBBS and Henri PFR.

Commanding instant attention from the main stage of the festival was an awe-inspiring 30-meter tall by 70-meter wide representation of a spread-winged owl. The distinctive scenic element was made even more impactful by a bold and vivid lighting display designed by Creative Rental Solutions (CRS) that featured a collection of CHAUVET Professional STRIKE, Rogue, COLORado and COLORdash fixtures. 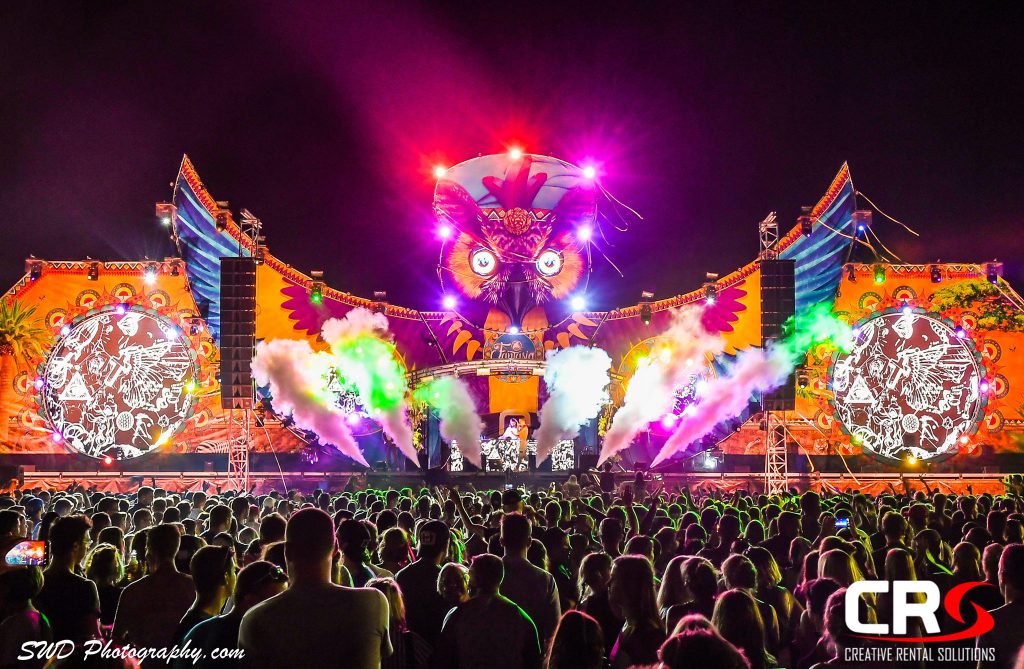 Thomas Vandekerkhove and his team at CRS used an artfully blended mix of STRIKE P38, COLORdash Par H12IP, Rogue RH1 Hybrid and COLORado Panel Q40 fixtures to lend a vibrant personality and sense of movement to the giant scenic bird.

“It was a huge challenge to illuminate the large bird with the logo of Fantasia Festival,” commented Vandekerkhove. “After much deliberation we decided upon installing the STRIKE P38 fixtures in the head and wings to highlight the contours of the bird and to create some exciting looks.”

With a combination of audience blinder and strobe powered by a 90W warm white LED source, the compact, punchy and outdoor-ready STRIKE fixtures provided energetic looks to elevate the EDM DJs taking to the stage.

“We utilized the P38s to full capacity,” commented Vandekerkhove. “Not only were the strobe and blinding effects crucial for visual energy, the tungsten emulating warm white effect gave us more of a classic festival feel for a retro house vibe.” 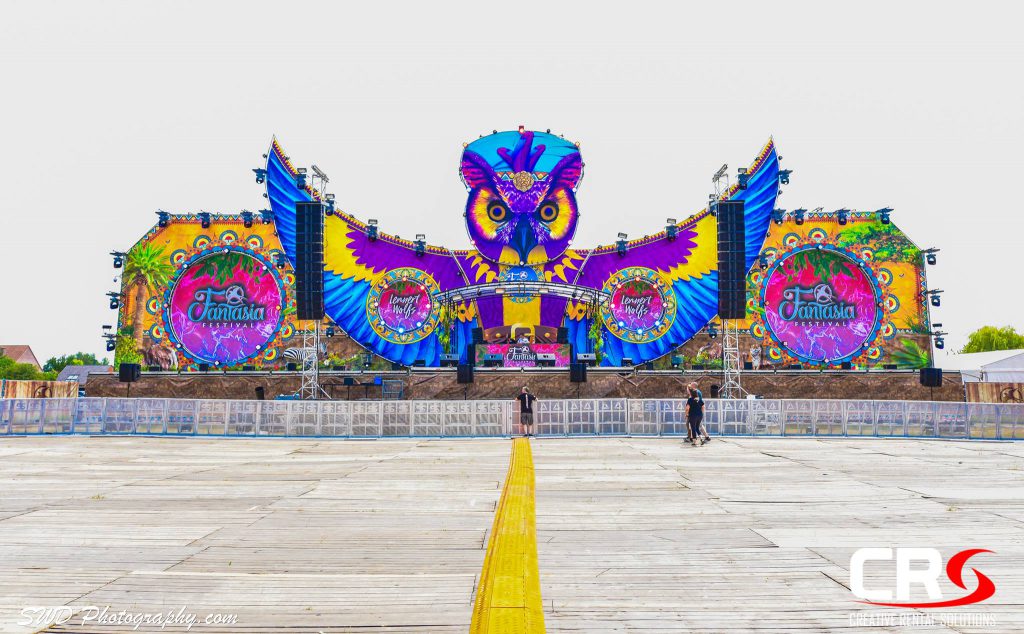 Providing a multitude of spectacular aerial effects and eye candy, Vandekerkhove positioned 10 Rogue RH1 Hybrids from truss on the wings. Thanks to layerable 8-facet and 6-facet prisms and 330W power source, he was able to award the DJs with necessary energy during the entire festival.

“For a festival of this magnitude, having the power of a fixture such as the Rogue is completely essential,” continued Vandekerkhove. “The prism effects still look great, even during the daylight hours of the festival, and as a result we were able to use all effects of the fixture to their full extent.”

In order to wash the entire wingspan of the owl with color, Vandekerkhove and his team specified 10 COLORado Panel Q40 panel fixtures. Thanks to the IP65-rated 40 15W RGBW LEDs and adjustable beam angles, the COLORados were able to create flawless edge-to-edge color mixing. 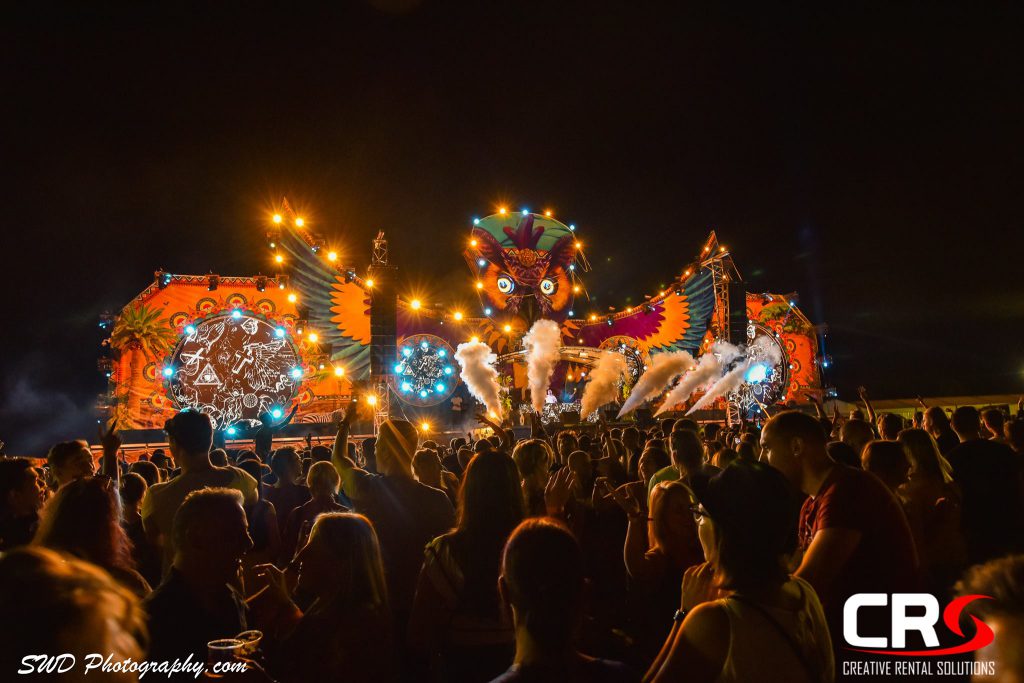 In addition to the visual solution covering the length and breadth of the impressive festival structure, Vandekerkhove and his team at CRS were simultaneously able to ensure energetic euphoria-inducing visuals with their selection of CHAUVET Professional fixtures. In doing so, the Fantasia Festival continues to enchant guests and performers alike with the magical combination of sound and visual excitement.