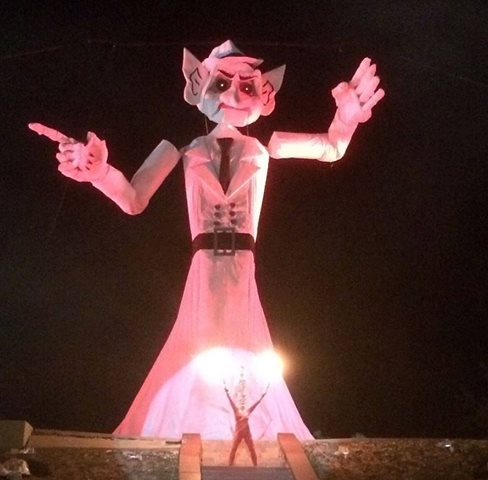 SANTA FE, NM – He’s big (over 50’ tall), rather grotesque looking with a devilishly menacing expression, and completely lacking in substance. Yet he’s the source of civic pride and the object of affection for the people of New Mexico’s capital. His name is Zozobra (“Old Man Gloom”), and every year he serves as the centerpiece of Fiestas de Santa Fe, the oldest continuous civic celebration in North America, dating back to 1712.

People celebrating this festival write their “sources of gloom” on paper and have them stuffed into the amalgamation of wood-wire-paper-netting-and-duct-tape that is Zozobra. At the height of the celebration, the 2000 lb. puppet is set afire, taking everyone’s concerns with him to a smoky hereafter. Before that, however, Zozobra is surrounded by dancing, music, merriment and, this year, a spectacular lightshow designed by Creative Backstage using Maverick and Rogue LED spot and wash fixtures from CHAUVET Professional.

Creative Backstage used 10 Maverick MK2 Spot LED fixtures and 24 Rogue R2 Wash units at the celebration. “We were contracted by AE Productions out of Albuquerque to create a lighting design that would support the festive atmosphere and help build anticipation for the burning of Zozobra,” said lighting designer John Garberson, owner of Creative Backstage. “We used spots to create some powerful aerial and gobo effects and we used washes to colorize the stage around Zozobra.”

Working onsite, lighting director Chris Brodmen and assistant LD Jordan Auge positioned the Maverick MK2 Spots downstage and to the either side stage of Zozobra to create an animated look on the puppet with light. “The Mavericks were used as key lights on Zozobra to make him come to life, which contributed to the mood,” said Garberson. “The old man basically stands on a hill of cyc grass and dirt beam – and we used the Maverick’s gobo features to create some cool looks in this area.”

The Maverick MK2 Spots were also used to light performers on stage around Zozobra. “The wide zoom and prism functions on the Mavericks were very effective in allowing us to plaster gobo textures and color on the stage performers,” said Brodmen, who controlled the rig with an Avolites Tiger Touch II running v10 to an Ethernet node.

A collection of 24 Rogue R2 Wash fixtures was on trussing flanking the Zozobra stage.. “The R2 Wash was the main color wash for Old Man Gloom and the stage performers,” said Garberson. “They worked out really well, giving us a good choice of saturation and warm whites to match the color temps of the ellipsoidals we also used as side light. Their zoom range definitely gave us the spread to cover large areas of the stage.”

All lights in the rig were used to illuminate the climactic moment of the evening: when Zozobra was put to the torch. “We literally had to get the lights as close as we could to the action without burning them along with Old Man Gloom,” said Garberson. “The output and zoom range of the Maverick and Rogue helped our team balance this concern. We could get a lot of light on him without getting in the fire zone.”

Weather was also a concern for Garberson. “There were big black gloomy clouds haunting us right up until 15 minutes before the show,” he said. “Then the winds died and the skies cleared for an amazing perfect condition to burn Zozobra.”

It seems that Old Man Gloom still has some impressive tricks up his sleeve.