Started in 1993 to honor the accomplishments of African Americans who have overcome odds to succeed, the annual Trumpet Awards have grown into a high-profile event with a national TV audience, dynamic entertainment and plenty of red carpet star power. At the same time, though, the awards have remained true to their original purpose of recognizing accomplishments in a wide range of endeavors.

Creating a stage lighting design that achieves the right balance between the glamorous and serious sides of this signature event can present a challenge, especially when you also have to balance the demands of lighting for a large live audience and a TV broadcast. LD Mark Carver (Mark Carver Designs, Nashville TN) and his lighting team of Susan Rose, George Lunn, Aaron Swetland and Billy Willingham accomplished this feat with flying colors at the 22nd annual Trumpet Awards held at the Cobb Energy Performing Arts Center in Atlanta. 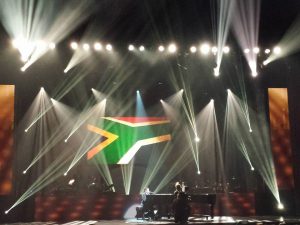 A large crowd of celebrities including Robbie Montgomery, Martin Luther King III, Melissa De’Souza and Laz Alonzo turned out for the event, which was taped for broadcast on the TV One network. “The event features an awards ceremony as well as some very powerful musical numbers,” said Carver.  “Our goal was to create an overall design that conveyed both excitement and dignity. At the same time, we wanted lighting that would engage the live audience without compromising the video production for television.  The technical requirements for television broadcast are always a consideration when you do this kind of event.”

“The Legend 230SR Beams performed flawlessly,” said Carver.  “We not only relied on their intensity to accent the performances on the stage, we also used them to light the audience and engage people in the arts center.”

Powered by a 230-watt Osram Sirius lamp, the Legend 230SR Beam produces an intense beam of 96,000 lux at 15 meters that features a razor sharp 2.25-degree beam angle.  The fixture also includes zooming 8-facet prism and 17 gobos (plus open) for beam shaping effects, along with automated focus.