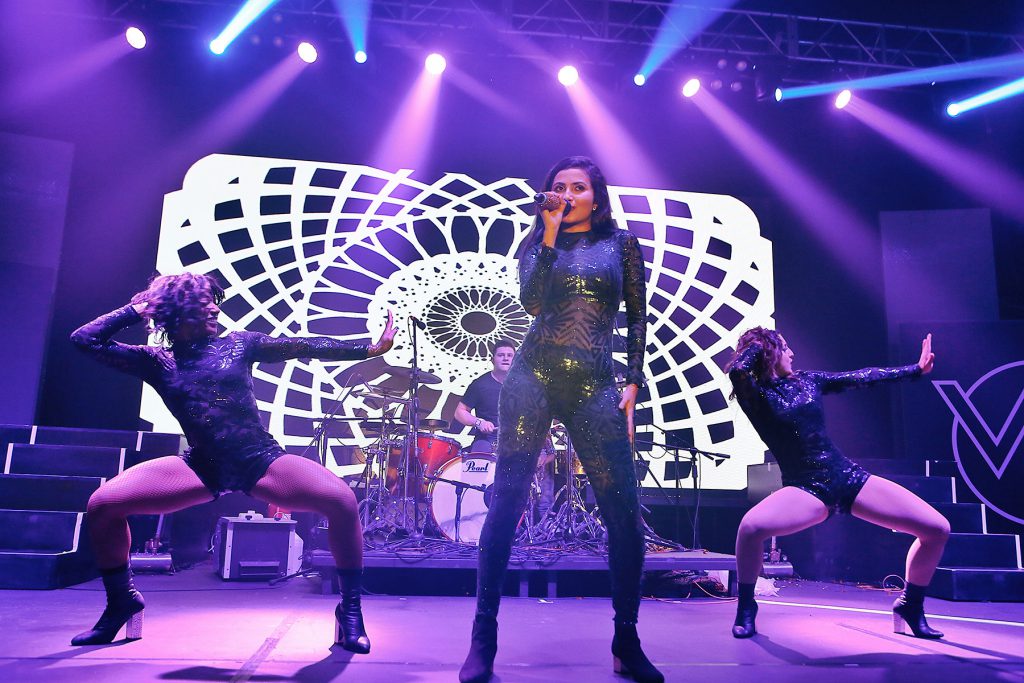 DURBIN, SOUTH AFRICA – Like social media itself, the music of international YouTube sensation Vidya Vox has a way of overcoming the barriers of time, place and culture. Melding widely divergent musical influences into a beautiful swirl of cross-cultural sound, the former pre-med student, who was born in India and raised in Virginia, has been captivating fans around the world ever since she uploaded her first song (a mashup of Ellie Goulding’s “Love Me Like You Do” with traditional Hindi and Tamil music) in April 2015.

This August, after garnering some 400 million YouTube views and appearing at The Whitehouse, the 26-year old singer embarked on an international tour in support of her first EP “Kuthu Fire,” starting with two dates in South Africa. Providing a stunning visual accompaniment to her eclectic and convention-defying Indian-English musical mix is a Chris Reade and Jay Ballinger designed light show that features collection of Maverick MK2 Spot, Rogue R2 Wash and STRIKE 4 fixtures from CHAUVET Professional.

“We use these fixtures in wide variety of ways to reflect the scope of Vidya’s music,” said Reade of Las Vegas based KYVA Design LLC. “Much of the credit for our impactful lightshow goes to Heather Cossette. Jay and I gave her a general overview of what we were looking for regarding visuals. Heather then took the concept and put her stamp on it through her programming and directing. We trust Heather’s instincts. I personally am impressed by her creativity, detail, and fantastic attitude.”

The net result of this collaborative effort is a lightshow that’s as sweeping and ebullient as Vidya Vox’s far-ranging creative mashups. Relying on the rich colors, wide zoom range and crisp gobo patterns of their overhead fixtures, the designers create intricate lighting architecture on stage that seems to bend and flow with the artist’s music.

Although the exact number of fixtures in the rig varies depending on the country the international tour appears in, their role in the design remains consistent. The Maverick MK2 Spot fixtures are flown on multiple trusses and are employed as key lights, in addition to being used for silhouettes, audience sweeps and gobo breakups.

“We’ve really been impressed by the MK2 Spot’s output,” said Reade. “It’s definitely giving us arena-level brightness, and it’s very versatile. We’re using it a lot for texture on the stage and to create hard edge looks.”

The Rogue R2 Washes also came in for praise from the design team. “I love the R2 washes,” said Cossette. “They clone great and I’m happy whenever I get them on a gig. They just do a great even wash, a nice tight beam, and the color mixing is wonderful.”

Engaging the crowd and strengthening their connection to Vidya Vox are the STRIKE 4 warm white LED fixtures that are positioned on overhead truss as well as on V-shaped structures located to either side of the stage. “We like the look of the STRIKE 4,” said Reade. “Its color temperature and adjustable dimming curve make it a great crowd light.”

Describing his work on the Vidya Vox tour as a “wonderfully memorable experience,” thanks in part to the artist’s singularly unique musical blend, Reade values the relationships already formed on the tour. “It was really great getting to work with Jonathan Syverson, who is Vidya Vox’s Tour Manger,” he said. “Charles Teer who did the programming and got the video aspect of the show working was invaluable,” added Cossette.

On the initial South African leg of the tour, which took place in Durbin and Johannesburg, local suppliers Sounds Ideal Productions and JYM Sound and Lighting supplied the gear for the concerts, providing the design team with more good memories. “Both companies were great to work with,” said Cossette. “Shaniel Laloo, our house lighting tech did whatever we needed, always with a smile. His lighting show was great, his timing phenomenal, and he had a positive eager to learn attitude.”

Somehow, it seems fitting that a tour by an artist who has transcended cultural barriers, brought so many people together at its earliest stops.