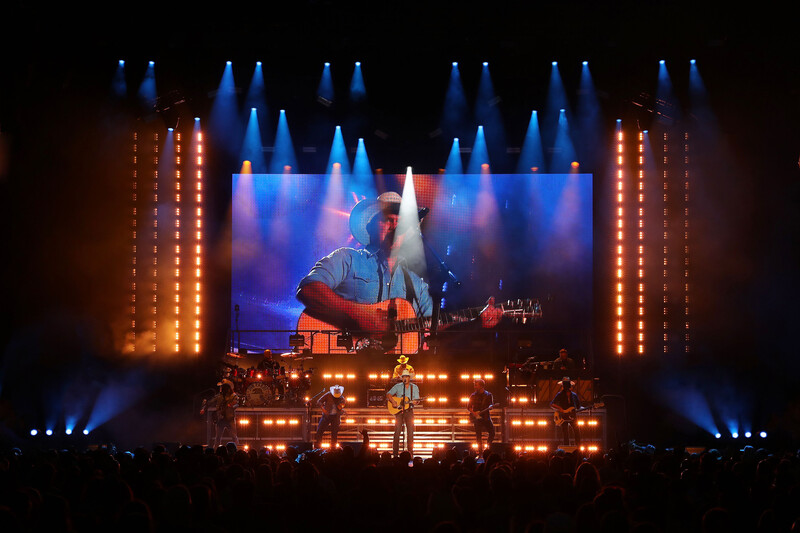 NASHVILLE – It’s fitting that one of Jon Pardi’s most famous songs (and the second of his four No. 1 hits) is “Dirt On My Boots.” As its title suggests, the song, like the artist himself, embodies the rugged, rock-solid values that run through the heart of country music. This deeply rooted attitude is front and center on Pardi’s “Ain’t Always The Cowboy” tour, not only in the 22 heartfelt songs on the multi-platinum star’s set list but also in the impressive production design that animates his stage.

With its towering lighting rig, industrial influenced riser, and scenic design, the stage conveys an air of pure, no-nonsense strength. This is precisely the sort of mood that Pardi was seeking when he met with the team from KYVA Design LLC.

Chris Reade, KYVA’s lighting designer, credits Jay Ballinger, the company’s set designer with turning their client’s vision into reality. “Jay and Jon really came together on this,” said Reade. “The idea was to project strength through masculine steel beams and rugged structural elements.”

Reade designed a potent Elite Multimedia supplied lighting rig that featured 190 CHAUVET Professional fixtures to accentuate and enlarge the evocative set design. “The lighting architecture is boxy to be consistent with the set; and there are some angles that make it feel larger overall,” he said. “Jay’s overall concept changed within our process, but we wanted to have a “wall of light” within the set. We have contrast between cold and warm light, kind of an old-school verses new technology vibe. I’m a big fan of this style of lighting, and it works well with an artist such as Jon.”

Shooting light through the blow-through riser that runs across the stage, adds to the impact of the entire design, while a massive wall of light backdrop fills a lot of trim, yet at the same time, the stage seems intimate and deep. Reade credits production manager Jeff “Goofy” Greeninger and LD Jacob Mueller with helping the design team adapt this impressive rig for different venues on the 25-date tour.

“There’s a reason why the articulation of the trusses is a certain way in this design,” he said “It looks big, but it’s somewhat restrained, because of venue restrictions. Building something massive is cool, but building something that will fit the venues and be a complete picture on most days is way cooler. Jacob Mueller had valuable input into the conception of the rig, but also in adapting it to various stages.” 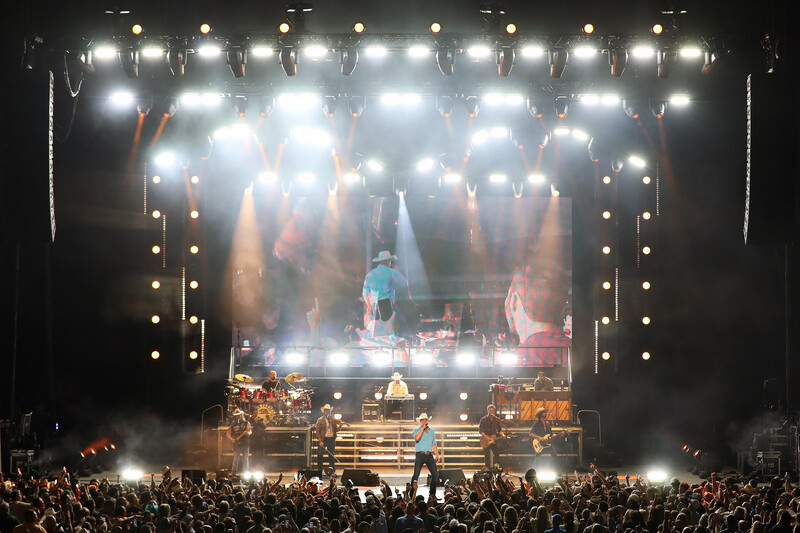 Regardless of venue, the rig, which is run by Mueller, is pumping out an endless stream of powerful looks. Contributing to the visual outpouring are 80 COLORado PXL Bar 16 linear fixtures, 54 Color STRIKE M motorized strobe/washes, and 56 STRIKE 1 blinders.

Reade’s design calls for the PXL Bars to be configured in horizontal lines within the set, as well as vertically on the torms located to either side of the video wall. These fixtures are used for side lighting, as well as to create texture on stage, and special pixel effects.

Flown throughout the rig, the versatile Color STRIKE M fixtures fill a variety of roles in Reade’s design, from strobing and audience lighting, to stage washes and specials. For added audience lighting and flourishes of intense light, the design team draws on the rig’s STRIKE 1 fixtures, which are hidden within the set and on the torms between the rows of PXL Bars. This arrangement makes their sudden light bursts all-the-more effective. 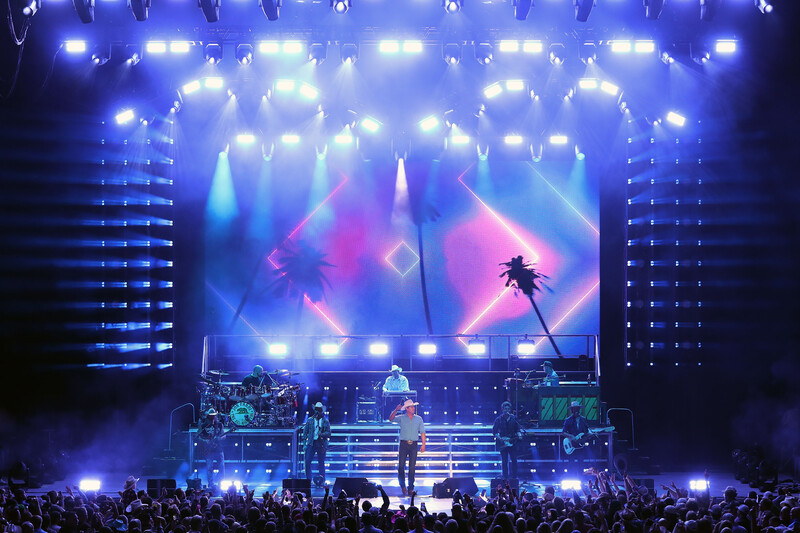 Helping this captivating set and lighting design come to life on the tour has been the inspired work of its LD. “I have been really impressed by how Jacob Mueller has programmed and run this show,” said Reade. “He’s really made this design come to life. Anytime you have an extended tour like this, you are going to come across unexpected challenges, such as stage configurations that aren’t quite the way you were led to believe they’d be. Jacob’s ability to understand how to translate the vision to fit different circumstances has been truly special. We also have to express our thanks to Robert Harrison, the lighting crew chief, and Ryan Welke the dimmer tech, as well as the lighting techs Jordan Moore and Brandon Seney”

The vision for this tour design came together quickly, noted Reade, but like any great vision, it took a lot of hard work to turn it into reality when the rubber met the road. That’s the kind of roll-up-your-sleeves values celebrated on this tour, both on stage, and behind the scenes.