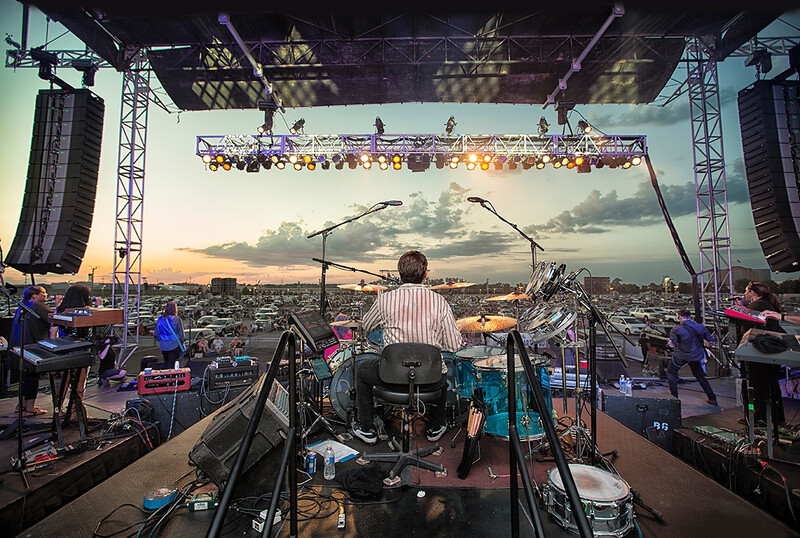 Consider yourself fortunate when you are given the opportunity to be part of something bigger than yourself.

By the standards of this axiom, Chip Self regards himself as being very lucky. The owner of Logic Systems in St. Louis, Self was called upon to light Live Nation’s first foray into drive-in concerts, a series of three shows over the weekend of July 10-12, featuring headliners Brad Paisley, El Monstero, and Nelly.

Although there had been other drive-in shows before, Live Nation’s offering marked a pivotal moment for the emerging format. The first in a series of drive-in events from the entertainment company, the three St. Louis shows greatly enhanced the credibility of the new concept in the industry.

Self was more than lucky in being presented with the chance to be part of an event that extended far beyond his own personal business interests in terms of its overall implications. He possesses the skill and experience that were needed to meet this unprecedented challenge – and perhaps most importantly, the courage to tackle it head on.

For Self, lighting Live From The Drive-In, the concert series’ official name, was ¬– like all opportunities in the post COVID world – a question of “either adapting or getting left behind.” After 32 years in the live event lighting and audio business (he started his company directly out of school), the choice for him was clear.

Speaking to us after the seminal Live Nation event, Self discussed the details behind the creation of the show’s rig. He also shared insights into the impact the new drive-in format is having on the live event industry.

Although drive-in concerts may well disappear after COVID-19 fades into history (as Self believes), the example he has set in meeting a challenge bigger than himself will still hold valuable lessons for the production community at large. 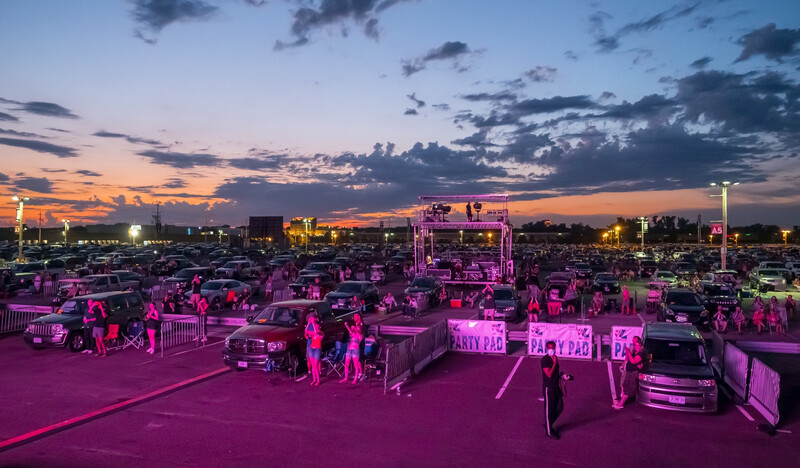 What was your initial reaction when you learned that you were going to be lighting Live Nation’s first drive-in show?
“My initial reaction was that I was thrilled to have a show to work on of any kind. Once I got beyond that excitement, the scope of the project and its importance to the industry started coming into focus.”

You had three headliners from very different genres at your series of drive-in shows. How did you ensure that the rig you put together had the flexibility needed to support this range of acts?
“That part was pretty easy. By providing quality equipment in a logical approach, I felt that most any qualified designer would be able to get something cool, and appropriate for them and their client out of the rig. Plus, we had three different designers. Brad Paisley had his own LD, I did the lighting for El Monstero, and our own Erin Wolf from Logic Systems ran the Nelly show. So, having three different LDs, each with a distinct approach, kept things fresh.”

You mentioned the importance of having quality equipment. Do certain types of fixtures become more or less critical in a drive-in environment?
“Particularly for the daylight portion, it’s all about brute force. The smaller, more delicate fixtures just get lost. Even with big boy fixtures, I found myself eliminating gobos, just to increase the horsepower. Those subtle details just don’t read in such a large space.”

Can you elaborate on how are the visual dynamics of a drive-in show are different from an arena concert or festival?
“From a lighting perspective, it wasn’t a whole lot different than a large festival. The two biggest differences were the time and the budget. Time was a factor because the shows were early. This meant that we had direct sunlight on the stage for at least half of the performances.”

“Budget was a factor, because budgets are inherently tight for this sort of show. Attendance is lower than normal, because there’s a hard limit on the number of people the show could safely accommodate. This naturally results in smaller production budgets.”

“Then there was the question of audio – with a space this large, the audio budget on a per-capita basis has to be substantially larger than normal, just because people are so spread out. That puts added downward pressure on lighting budgets. Likewise, the need for more video per-capita pushes down lighting budgets”

“So, the net challenge is first to come up with a design that works for multiple artists of multiple genres. Second, select fixtures and placements that can tolerate potentially bad weather. Third, figure out how to create a visual impact in daylight, for an audience at a distance. And fourth, do all of the above for a relatively low cost and on a relatively small stage.” 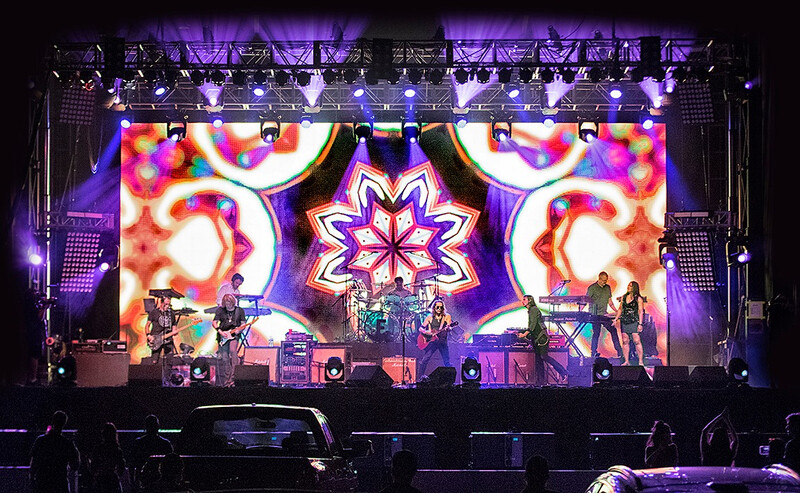 Can you elaborate on the last point you made about stage size?
“We had a 50-foot by 40-foot stage, which in the context of a 1200 by 1200 parking lot is quite small. The obvious challenge is to do something that makes the stage ‘feel’ larger to the audience. We paid special attention to details that allowed every inch of possible trim height to be used. And, we positioned fixtures to allow beams to “escape” the confines of the roof, and make use of air space around and above the stage. This increased the visual footprint of the space.

“For example, we made ‘pods’ from groups of six LED strip lights to create what appeared to be very large crowd lights. We positioned these fixtures so they lit the stage, lit the audience around the stage, and blocked the vertical hydraulics on each side of the stage. Obscuring the hydraulics made the stage look considerably wider. The pods were bright enough to ‘reach out and touch someone’ at quite a distance. They also provided a lot of movement and color.

“Also, by using the LED Pod fixtures in a high-channel-count mode, we were able to control individual pixels, and use mapping and various effects to come up with a pretty wide variety of visuals, ranging from basic color washes, to random strobing, to giant VU meters.

“We also added a row of a dozen beam fixtures placed across the downstage edge, from one extreme edge of the work wing to the other. This gave us a line of over 100-feet in width. By placing them at the very downstage edge, beams could shoot out past the roof edge and make use of hundreds of feet of open airspace above and around the stage.”

What did you do for audience lighting?
“There were eight high output lights on top of FOH that we used as strobes / audience blinders. This made the crowd feel more connected to the stage, which is a challenge in a drive-in environment. We used conventional fixtures for the downstage wash to keep costs down, without impacting the “flashy bits” of the show. This also eliminated the concern over those fixtures getting wet.”

Given the differences just discussed, is the overall role of lighting different in a drive-in show? Does it become more or less important?
“Potentially, lighting can become less relevant for the daylight part of the show. I think we did a good job adding things that remained visually relevant, even in daylight. That said, the whole feel of the show changed once it got dark. The things we did to make it feel bigger started working, and the whole show seemed to expand into the darkness.”

Do the things we just discussed change the goals you set out for yourself as a lighting designer when working a drive-in?
“The number one goal, from my perspective, is always to contribute to the show without being a distraction – regardless of the format. The circumstances changed the way we did this in a drive-in setting, but the goal itself remained the same.”

How about the way you use things like video panels and atmospherics?
“Atmosphere was a challenge at these shows, because of a steady crosswind that kept changing directions. The guys on stage spent a lot of time moving foggers around to try to keep something on the stage.

“As for video panels, the only real challenge was dealing with their size and the great amount of light they produce. From a lighting perspective, that meant adjusting colors away from saturates to brighter options that would read better in higher ambient light levels. Since much of the crowd was watching on video screens, we paid special attention to making sure front light was a good fit for the camera, and natural skin tones. The video guys did a great job shading and chasing us around.”

Some people say that drive-in concerts can never replace the energy of an arena or festival show. What’s your response to them?
“There are primarily two choices to sound at a drive-in concert: using FM transmitters for audio, or using big PA for audio. In my experience, the FM transmitter approach feels all wrong; it misses the energy of a ‘real’ concert. The big PA option, if done well, has the feel of a real concert and delivers a much better experience. To be sure, a drive-in show is always different – but everything is different right now. That said, I think this is a whole lot better than another evening of Netflix on the couch.”

Did you get any feedback from fans about what the drive-in experience was like for them?
“The people I spoke with really enjoyed it. There’s something different about experiencing music with a group of people. It’s something we have an engrained need for – at least some of us. I don’t think there’s any substitute.”

Performers feed off the crowd. Based on what you saw at Live From The Drive-In, how did the headliners connect to the audience?
“I watched each performer take a few minutes to adapt to the energy of the crowd. It’s somewhat diluted because people are so spread out – and some are so far away. After a short adaptation, they all seemed to ‘get it’, and went to work as normal. These people are all pros, so they know how to adapt on the fly and make the most of the situation.”

Do you think we’re going to see more drive-in shows during the COVID-19 lockdown?
“I sure hope so! If not, I believe there will be a whole lot of people going through some sort of live show withdrawal. As I said, there’s an engrained need for this sort of thing. The pent-up energy we felt at these first shows was palpable to anyone.”

How about after the lockdown ends? Do you think we’ll continue to see drive-in shows?
“I don’t think so. Drive-ins are a great substitute, but they’re not the same. Nothing replaces the energy of an awesome live show, when everything just clicks, and the hair stands up on the back of your neck. We’ve all had those moments. That’s why we keep doing this crazy stuff.”

Do you think the experience of lighting drive-in shows will have a lasting impact on your approach to design?
“There isn’t anything life-changing about it. I do think there are a couple tricks I picked up that I’ll use again. The pods came out way cooler than I thought they would. I’ll definitely be using that trick again.”

This was your first drive-in show. What surprised you most?
“What surprised me the most was just how cool the audience was. This set of shows was a test to see if people could gather for a drive-in concert, and follow the rules. I’ll be straight with you – I was on the bubble. I wasn’t confident people ‘got’ how important this was. I was pleasantly surprised –, and enormously grateful – that everyone did their part to prove the concept. I hope it means we get to do more shows.”