SIOUX FALLS, SD – Legendary electric violinist and member of the original Trans-Siberian Orchestra, Mark Wood began his holiday concert at the Denny Sanford Arena with a stirring message for the 12,000 people in attendance.

“We’re going to burn up tonight,” said the virtuoso musician and Emmy Award-winning composer. “We’re here to celebrate the wonderment of music making. We’re inspiring these amazing kids and we’re inspiring the future.”

The “amazing kids” that Wood referred to were local music students who joined him and his band on stage for an exhilarating concert that blended new twists on holiday classics with electrified orchestral versions of rock standards like The Rolling Stones’ “You Can’t Always Get What You Want” and Led Zeppelin’s “Stairway To Heaven.”  Matching the spirited music note-for-passionate-note was a big, bright and intense lightshow designed by Aaron Zimmermann of Proline Entertainment (Watertown, WI), that featured over 100 fixtures from CHAUVET Professional.

For Wood, the concert was about more than making music. He was appearing in Sioux Falls for Electrify Your Strings!™ an outreach program he started to encourage students, parents and teachers to embrace new ideas and new technology in school music programs.  The concert served as an opportunity for him to showcase the talents of students who had attended his three-day workshop, and as a fundraiser for local school bands and orchestras.

Drawing on the Rogue R2 Wash fixture’s wide zoom range of 12° to 49° and smooth color mixing, the team used the powerful LED movers to create a variety of looks on stage and engage the audience with multi-colored overhead washes. Flown mid-stage and upstage, the Rogues provided an intense output that stood up well against the beam fixtures.

With their fully homogenized beam, the COLORado 1 Solo fixtures, which were flown on upstage truss and set on downstage edge, created vividly rich color washes that changed to reflect the mood of the music. The fixtures’ wide (8⁰ to 55⁰) zoom range allowed their coverage area to change throughout the concert as well, lending a variety of looks to the stage.

This seemingly endless array of uplifting looks from the lightshow provided a perfect accompaniment to the underlying message of Mark Wood’s Electrify Your Strings! program: With the right tools, there is no limit to what the creative spirit can achieve. 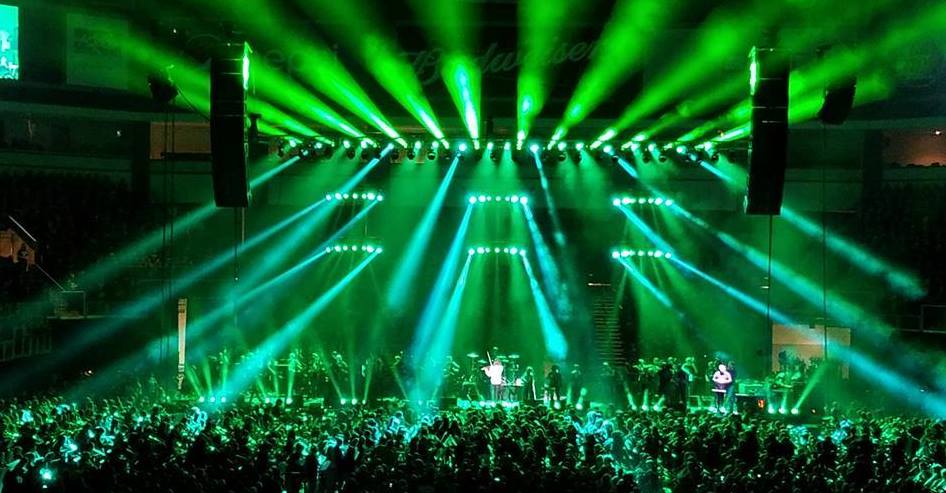