NASHVILLE – There are paradoxes involved in design. Keith Hoagland appreciates that. Sometimes, says the well-known designer and programmer, “less is indeed more.” He and co-designer Steve Leopard of Leopard Production put this time-honored principle into practice recently when lighting a corporate event live stream for legendary country band Sixwire with special guest Steve Augeri, the lead singer of Journey from 1998 to 2006.

Accounting for the small studio space that the livestream was shot in, the two designers deliberately kept their video wall backdrop simple. “In some instances, it’s better to approach video with the less is more mindset, especially when space is an issue,” said Hoagland. “In this case, having a quiet backdrop with a series of smaller video walls, allowed us to paint the area between those walls with rich colors. This gave us a depth of field for the cameras to read.”

In creating this design, Hoagland and Leopard unleashed the power of another paradox: the best way to expand the appearance of a tight space is to break it up into small sections, especially when each is defined by bold patterns. The duo lined the walls of their set with seven video panels in a U-shaped configuration. Rather than show the same images on each, they devoted one or two sections to IMAG images and displayed breakout patterns on the rest.

The multiple images worked to make the space seem larger. Then to give it texture, they covered the floor in vivid washes and a wide range of gobo patterns created with 24 CHAUVET Professional Rogue RH1 Hybrid fixtures supplied by MP Productions. (Leopard Production supplied the rest of the gear.)

“We wanted to fill space, not only on the floor but in the air as well,” said Hoagland. “Given the size of the space, we used a lot of RH1 Hybrids, and we spread them out as much as possible too.  Since the space for this shoot was quite small,  I wanted to have as much spread on fixtures to cover not only the air and floor space, but also to  cover the talent.”

At times, Hoagland matched the gobo patterns from his Rogue RH1 Hybrid fixtures as closely as possible to the images on the video panels to create a sense of harmony on the set. During other portions of the show, however, he used the 330-watt moving fixtures to create big and bold stand-alone patterns that gave the set a unique look and accented key moments in the performance. 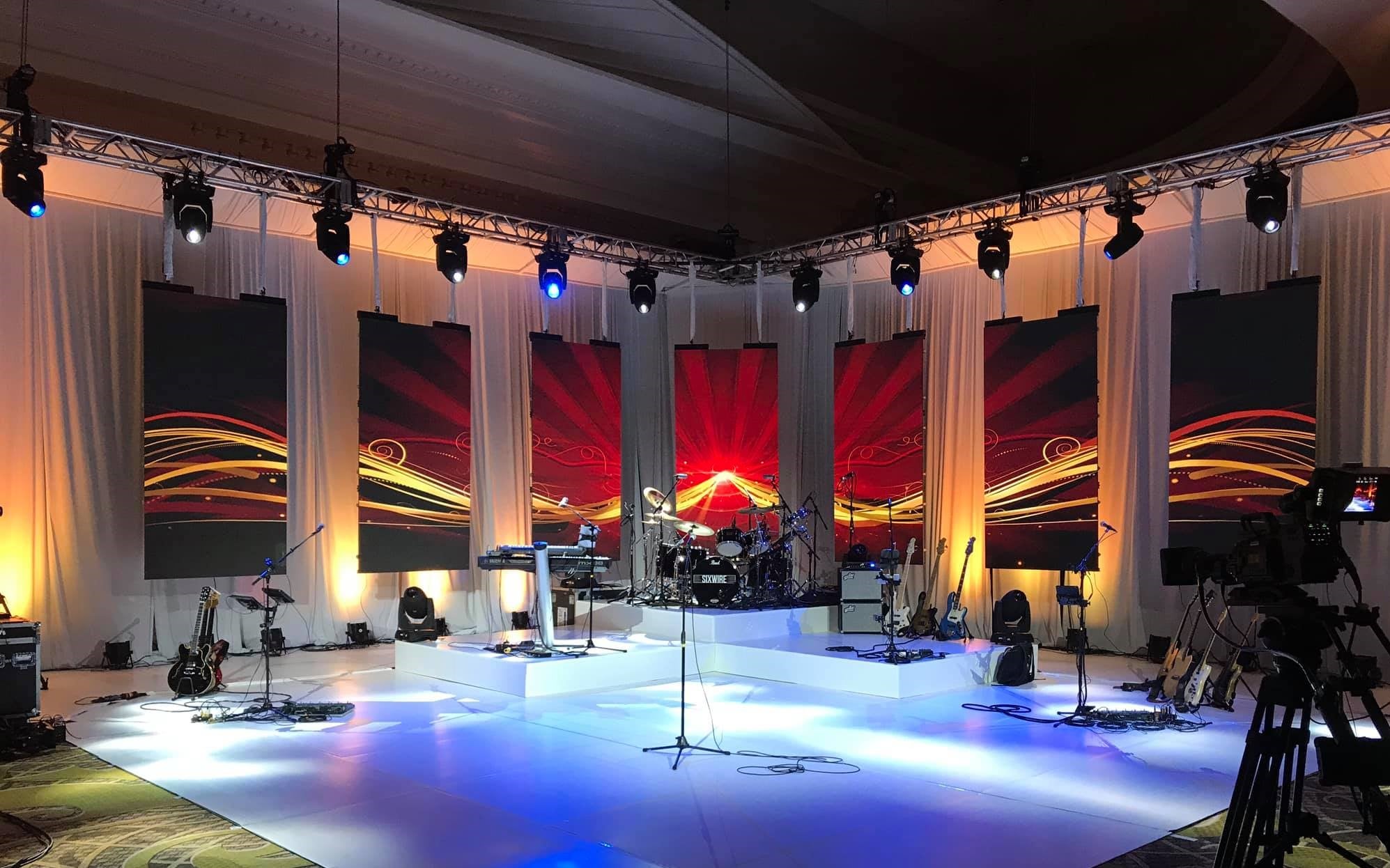 “The RH1s are great for gobos,” said Hoagland. “We used quite a few of the patterns, Mainly going through each pattern and watching the program monitor to see which read best. Trevor Drawby was our programmer and board op for this stream.  He came in and killed it for this event.  It was a really fun project because everyone just came together as  a team.”

Working together as a team “brings out the best in everyone,” noted Hoagland. A paradox? No, but it’s as true as any principle involved in design.