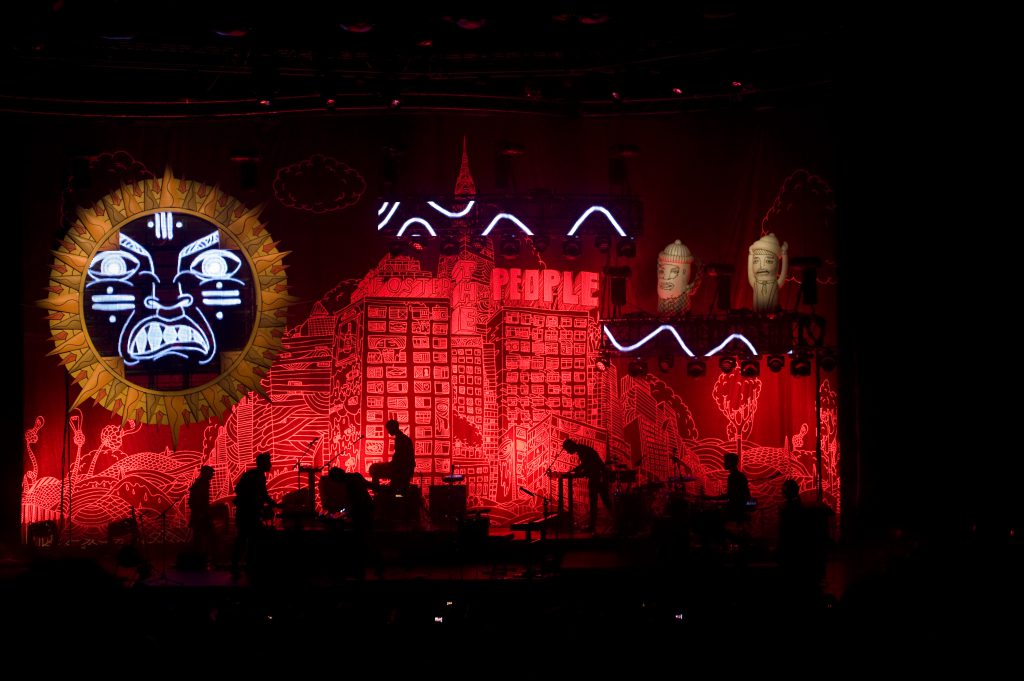 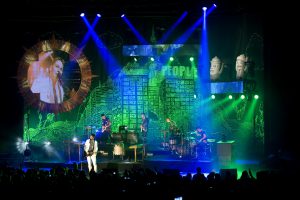 Nearly 40 CHAUVET Professional fixtures accompanied the band on its recent tour, supporting its debut studio album Torches. The bulk of which, 16 CHAUVET Professional COLORado Batten 144 Tour linear wash lights, lit the 60-foot curved backdrop illustrated in the same vein as the album art. Or more accurately, helped tell the story of the tour.

“The backdrop was kind of the glue of the set and the world of our stage,” said Matusow, who worked closely with set designer Trevor Stirlin Burk for this reinvigorated, reinterpreted last leg of Foster the People’s 15-month tour. “After the band skyrocketed, this was the victory lap for them, [as it] was going to be the last tour for this album cycle. We really want it to be special, to make a statement.” 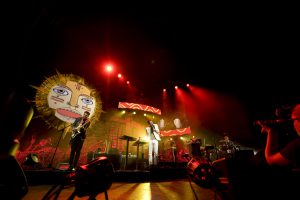 Part of that statement was to enlist the album cover’s original artist to draw the backdrop,which “embodied the world of the characters” and create large-scale, inflatable versions of these characters that “cross the fourth wall and involve audience members and define the stage in a way that no one has ever seen before.” This combined with paper airplanes, marching bands, bubbles, confetti and “an LED wall built inside of a scenic sun”, told the story the band and Matusow wanted to tell. And one of the key components was lighting. 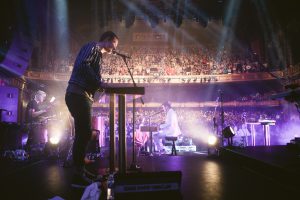 “We faced a predicament [in our] design process of how we were going to light this backdrop beautifully,” said Matusow, describing the white line work on black of the integral backdrop. “We wanted very saturated colors, but we also needed to have beautiful variations of white. It was so important to have different hues of amber and [cooler] white and everything in between in order to light it beautifully.” 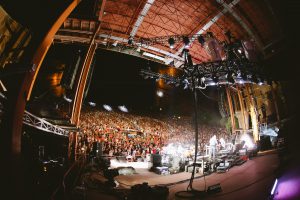 Enter COLORado Batten 144 Tour, which not only met the design needs in terms of output, but was also an ideal length—as opposed to other fixtures that are six feet long—when lighting the convex backdrop. Additionally, said Matusow the light’s smooth, distinct “dimming curves did a great job [going] from zero to five percent, where you’d normally would see clicking.” 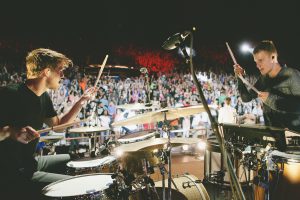 “When this happened, one of our spotlight operators—in a tower 200 feet away—told me when that [entrance] moment happened, he could no longer see the stage,” said Matusow. “[The LED fixtures are] that bright. They looked great on stage.”