NEW YORK – Sometimes lighting design comes down to an elemental level, even when it results in a 54-universe, deeply evocative show with an intergalactic theme that takes place at one of the world’s most famous arenas. Such was the case on April 28th when Butch Allen and André Petrus lit Nigerian superstar Burna Boy’s two-hour “One Night In Space” show at Madison Square Garden.

The massive lighting design for the sold-out concert dazzled, turning the iconic venue into a giant lightbox that stirred the imagination with outer space images. Yet, for all its multi-faceted flourishes, the design process followed a basic formula.

“Burna Boy’s music provided the road map, and we followed it, ”said Allen, noting that the end result was a design based on “visual harmony” between the image, atmosphere, and the artist’s performance.

Lighting the way on that road map and contributing to that atmosphere were Madison Square Garden’s house lights and an impressive rig provided by 4Wall Entertainment that featured 68 COLORado PXL Bar 16 fixtures from CHAUVET Professional.

The motorized RGBW COLORado units, with their 200ﹾ tilt, were critical to creating the show’s spaceship vibe. Using the fixtures to outline the outer edge of the “starship stage” and circular “space ship trusses,” Allen and Petrus reinforced the theme of the concert. “They were our nod to close encounters,” Allen said of the battens.

Elaborating on the symbolic theme of the evening (the first-ever MSG concert headline by a Nigerian artist), Allen coined terms like “Sharpageddon,” and “Beampocolypse,” before adding, “it was like a 190-foot starship carrying all of us through our one night in space.” 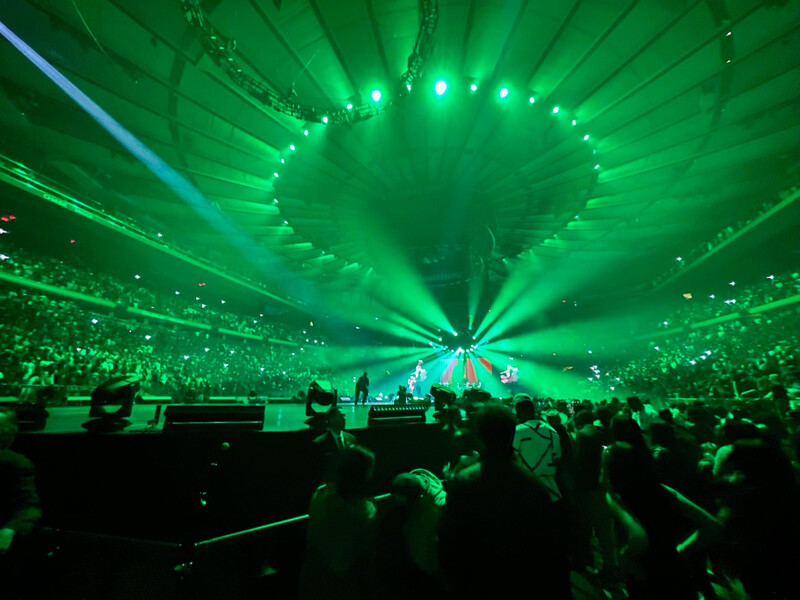 Preprogrammed and time-coded by Petrus at his Nashville studio, the fantastical show energized the entire arena without distracting the live audience or detracting from the livestream of the concert.

“We utilized the 4Wall lighting system and augmented it with the very well-equipped MSG in-house production,” said Allen. “The MSG lighting system is perfectly placed to provide a camera-ready, rental-damage-free guest experience.

Allen also credits Burna Boy and his production management with creating a smooth show experience. “We are so grateful to Burna Boy and his sister Ronami Ogulu for her leadership and vision,” he said. “Ronami was a guiding force driving the spectacular visual presentation Burna Boy made on stage. This was a magnificent evening; the whole show was just next level.”

Interestingly, this immersive panorama came to fruition without rehearsals on the part of the lighting/production crew. “This was a one-off, and we never had the opportunity to rehearse,” said Allen. “ We were never even in the same room. The show was designed over WhatsApp, Zoom, and email, yet it came off beautifully.”

The Burna Boy production team also helped make the show come together under these circumstances, noted Allen, who said “they really set the tone for us to follow.”

Following that kind of tone, and the music of an inspired artist will help gifted designers get to a good place every time, even in the heart of the big city.