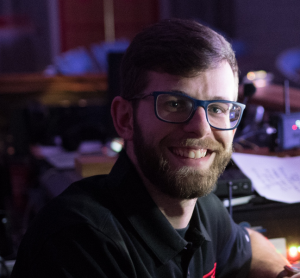 Like other LDs, Brent Schmidt routinely creates magic with his lighting. In some cases, though, when he’s working live performances with his client, famed TV magician Rick Smith Jr., he actually has to light magic itself.

Lighting does more than contribute to the illusions that magicians like Rick Smith Jr. use to enthrall audiences. Borrowing some pages from the realms of theatre, concerts and events, lighting should transform not only the stage, but the entire venue, where a show takes place, creating an aura that encourages audiences of all ages to lose themselves, if only for an hour or so, in a magical world where anything is possible.

Achieving this transformation isn’t always easy, given the wide variety of venues where magic shows take place. Schmidt talked to us about meeting this challenges and other “tricks” of lighting magic shows.

Good magicians like Rick Smith Jr. make magic tricks look very easy. Without giving away trade secrets how does lighting contribute to this impression?
“Direction, emotions and wonder. My job as the LD is to take what the magician is doing and add scenic/lighting elements to the emotion or story being told to the audience. As an example consider this: the magic is taking place at center stage with the magician’s lovely assistant laying on a table about to be cut in half. Don’t worry she’s not going to be, but imagine you have two moving spots upstage left and right. They pan to hit the magician and the assistant. Now, pick a color, select a gobo and put it into a sharp focus. If you want to have some fun, put a rotation or an iris on the gobo and watch the crowds reaction. Now imagine if you had that same magic trick taking place on center stage but without lights. It’ not nearly as exciting. So, that’s what the lighting contributes.” 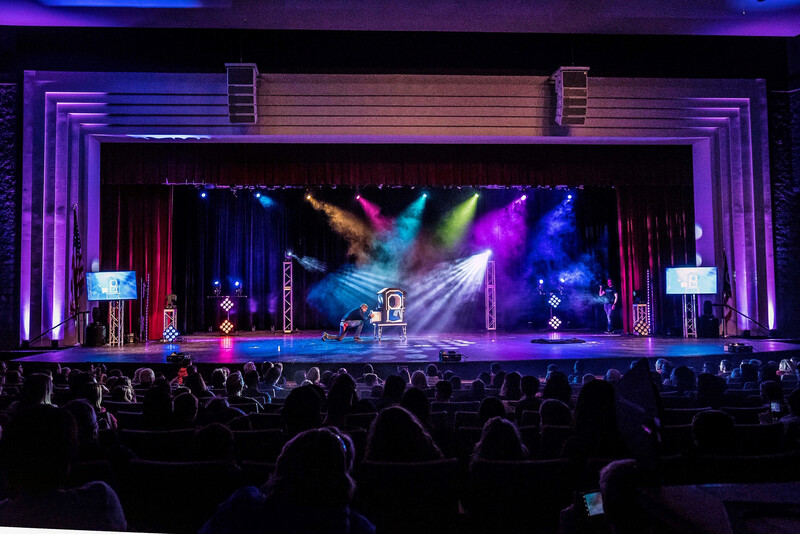 What’s the hardest thing about lighting magic?
“Everything has to be spot on, both in terms of programing and what color palettes you use. Magic is not your typical stage show that has the standard front lighting, back lighting, side lighting, etc. It takes careful planning and design to enhance the magician’s illusions. Our job as the production company/LD is to not take away from the magic, but to add those elements of wonder and curiosity by means of colors, gobos and movements.

“It also important to have a lot of fixtures when you light magic. My company owns a good bit of inventory, but we do lack on some ends. I’d love to have at least eight beams, spots and washes at a magic show, so I have more creative options when programming. I work with what I own and it looks great. But for me, I’m always looking to better the show and get myself to the next level, but those next steps take a high capital investment.”

How about touring? What are some struggles you face with this touring magic show?
“The biggest issue I face every venue we go into is the actual space. The majority of our shows take place in a theater. Some are very modern, but some are so out of date that the equipment doesn’t work. I’ve had to modify and bring in additional structures to have front lighting, or use more trussing to make a set. We’ve been in gyms, where we had to set up about over 200 feet of pipe and drape. We’ve also set up shows in cafetoriums, that are actually more cafeteria than theater. There are almost always logistical issues to deal with; then we there’s reprogramming scenes to fit the space we’re in, or having to ask the host to cover windows, because the space we are in has too much ambient light. I’ll admit, I’ve gotten really good at improvising and reprogramming a full show in less than one hour.”

When lighting musical performances, a LD has to anticipate where a song is going to go. Do you do the same thing when lighting magic?
“Not necessarily. In our theater magic show we have everything scripted and programmed out, so the show has its flow. Corporate magic shows are kind of the same as theater shows, but we do have to anticipate where the audience member on stage will take the show. Its actually not always the magician on stage that steers the show. When the magician brings someone on stage as a guest assistant, the show can go really well or be a flop, all based on that audience member.” 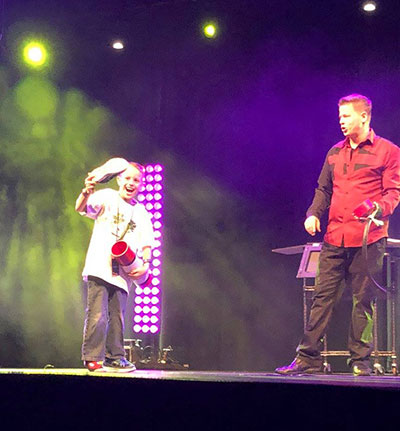 Do you ever busk when lighting magic?
“It depends what environment I am programming in. If we are doing a theater show, I will rarely busk, unless something on stage is off, or the magician throws a curve ball at me, and I have to spot an audience member or a location in the theater. But we usually have conversations about those items. In a corporate magic show, that show I will have about three or four parts where I am busking live.”

When lighting magic, do you wind up figuring out how the tricks work?
“Yes I do. The reason I do is because I need to understand how to light the illusions on stage. There are sworn secrecy things that I have to obey by. The little kid in me is somewhat disappointed that I know the tricks, but the adult kid in me sees the things that our eyes, mind and ears do to us when confronted with magic. Overall, its cool to know, but at the end of the day, it’s just business. Plus, I never really know all the tricks!”

How important are shadows and dark spaces to lighting magic?
“They are important to keep the audience’s attention on a give spot on stage. Even if that’s a spot on the magician or on an illusion trick. Shadows create dimension and wonder. Here’s the thing, the beginnings of our shows are very theater like. As a show progresses, we are use spotting tricks, overhead lighting, side lighting and shadows to elevate the show to the climatic moments that the magician is taking the audience to. The dark spaces are there for a reason. Some reasons I can’t say, but some are just for stage direction. We do keep certain areas dark so that our stage hands can spot a trick in its place. Then we’ll bring the lights up when the magician moves on to the next trick.”

How does lighting magic compare to theatre?
“In my opinion, it’s two different worlds. There are techniques that you still use such as scenes and palettes. But magic is very unique because you have limits that cannot be crossed. The magician is the boss and will tell you what is needed. If the magician wants dark and mysterious, you create that feel. But you do have the freedom to try new ideas and tricks in magic. I’ve done some research on what is the standard lighting ideas for magic, but it’s been all over the place.”

Stage logistics must be especially important when lighting a magic show. How do you deal with them?
“Spike tape, rehearsals and knowledge. These three words all go hand and hand. Can’t have one without the other two. The biggest issue for me is when a stagehand misses their spike mark on stage. Not only will the magician or prop not be properly lit. but it could also give away the trick.” 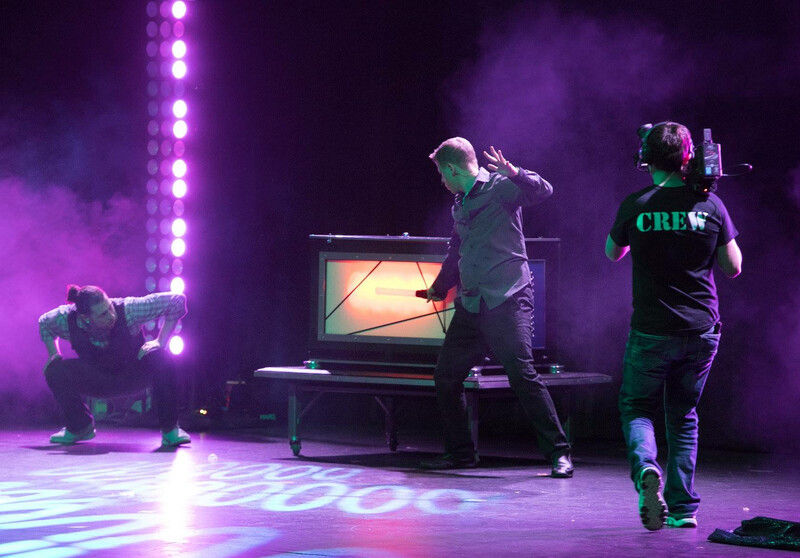 What makes a good magic show lighting design?
“A great magician will tell a story about a situation and and during that journey will find the solution with magic. Using light to enhance and create that emotional connection between the audience and magician is the key to a great show. Just throwing light on stage and saying its good isn’t the point of my job.

“To have a good lighting design, you need to look at it like a chef. The chef will make a great meal but the serving staff needs to create that experience of hospitality and comfort to make the patron warm and satisfied. As the LD, we add those touches to the overall experience to bring home the magician’s magic.

“Another thing I do when we are in new theater spaces is to look at the environment I am in and around. In theaters that have a lot of brick, I have my crew setup our uplighting in the audience to bring out the brick architecture. If I have plain walls that I can add texture too, I take between two to four moving spots and set a gobo pattern on the walls for walk in looks and even sometimes during the show to create a new element and take the audience out of the real world and place them into my lighting world — and the magician’s world.

“Same thing goes for a theater space that has some kind of unique or bland ceiling. You’d be surprised on how many clients are in awe when telling me how great their space looked even before we started the show.”