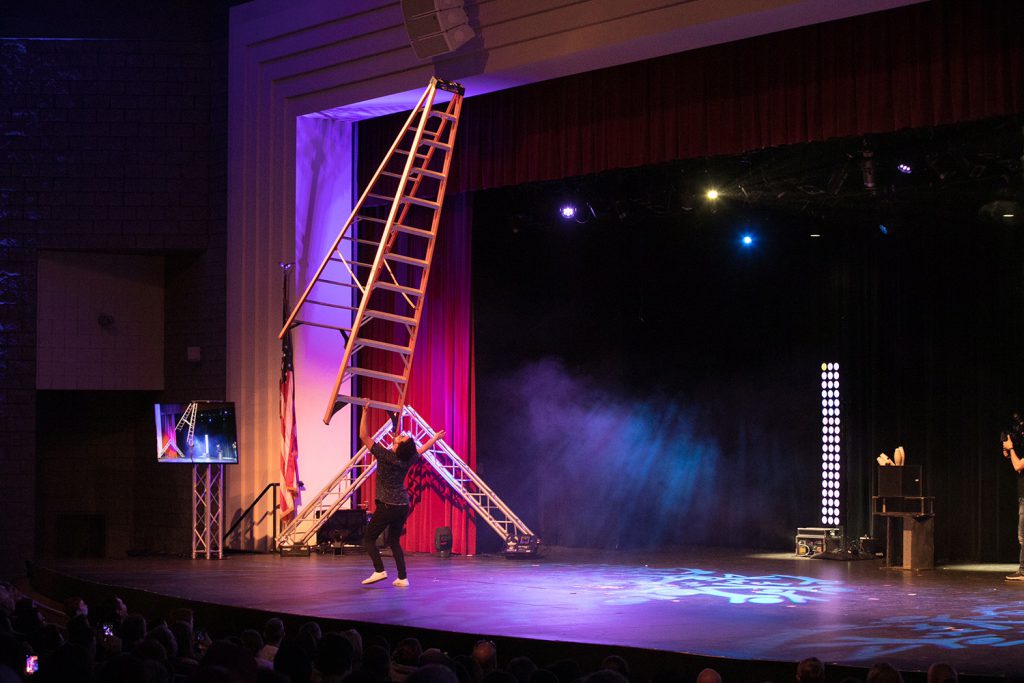 MENTOR, OH – School fundraisers have come a long way from traditional car washes and bake sales. A case in point is Magic Gives Back, an organization that stages pro-bono magic shows at schools across the US to raise money for education projects. Started by celebrity magician and illusionist Rick Smith Jr., a frequent guest on national TV programs like The Tonight Show and the holder of the Guinness Record for “card throwing,” the organization transforms school facilities into magical entertainment showcases. Key to setting the mood at these events is a versatile, compact and easily transportable lighting rig created by Brent Schmidt that features a collection of Rogue and Ovation fixtures from CHAUVET Professional.

“Rick Smith Jr. approached me three years ago about designing, building and running the production for this show,” said Schmidt, the owner of B Productions. “Since the shows often take place in schools, they are not your typical theatrical production. I’ve taken theatrical elements, magic show looks and rock concert effects from my other projects and blended them into a creation that’s unique for Magic Gives Back.

“Some of the venues we work in have limited power accessibility, which requires longer power runs,” continued Schmidt. “On other occasions, we may not have a fly system or loading dock. I definitely could not pull all this off under these circumstances without my amazing B Productions crew: Renee, Sam, Anthony, Vince and Tommy. They are the real magicians backstage. Of course, the Chauvet fixtures being LED and compact are also extremely helpful in helping us meet these challenges.”

Working with Show Producer Drew Murray, Schmidt has four different light design parameters for Magic Gives Back, which will vary depending on the venue. On January 27, he used one of his larger concepts for a performance at the 1500-seat Mentor Schools Fine Arts Center outside Cleveland.

Schmidt hung the Rogue and Intimidator moving fixtures from the first and second electrics and used them for stage washing, specials and occasional audience lighting The Core 3×3 panels were mounted on a 10’ pipe and connected together to make a 6’x1’ panel on each side of the stage. “We used the panels for crowd strobing and blinding,” said Schmidt. “They were invaluable for quick scene changes.”

As an added means of engaging the audience, Schmidt positioned his uplights throughout the venue. “The uplighting made the crowd feel like they were part of the show with the dancers and performers on stage,” he said. “Then at key moments, when the music dropped, our foggers kicked in with their big plumes – and yes, it was pure magic!”