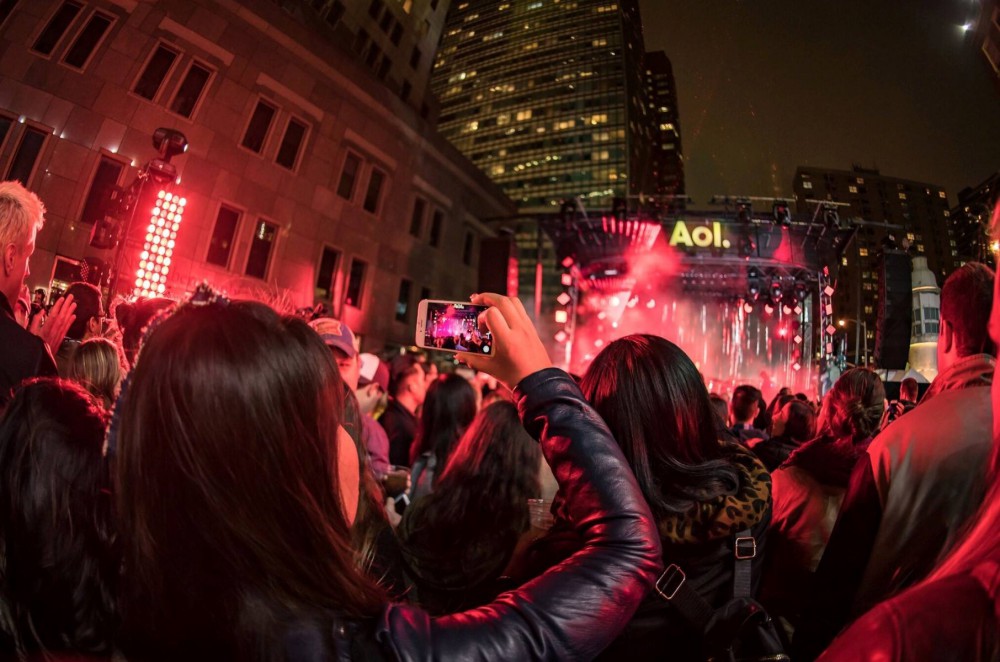 NEW YORK –Every year, traditional TV networks put on an annual event called Upfront Week to showcase upcoming programs to potential advertisers. Of course, the big networks are no longer the only ones offering original programming. Now that new media companies like AOL, Google and Netflix have joined the fray, they’re wooing advertisers with their own annual Manhattan extravaganza, appropriately called Digital Content NewFronts.

AOL grabbed the spotlight at this year’s version of the new media jamboree with “AOL Access: A New Kind of NewFront.”  A giant interactive block party that covered 50,000 square feet in Manhattan’s Seaport District, the AOL event featured a mind-bending blend of interactive and virtual reality exhibits, along with electrifying on stage performances by Snoop Dogg, Demi Lovato, and Years and Years. Adding to the immersive feeling at the block party was a lightshow anchored by Nexus 4×4 and Next NXT-1 fixtures from CHAUVET Professional, supplied by WorldStage.

“AOL has staked a claim among digital media companies for being in the forefront of reimagining the NewFront experience for the media buyers,” said production designer Michael Reese, Executive Vice President of Creatives at Barkley Kalpak Agency, which produced the AOL event. “Our overriding concept was to present AOL as a ‘block party,’ with activations where the attendees could experience the brand story, instead of being ‘talked to’ about the brands.  However, I would say that this was really more of an open experience than a party. The key message AOL wanted to deliver was that this was an OPEN PLATFORM where you could choose your own adventure.”

Indeed, the 3,500 invited guests who attended the event could choose from a myriad of adventures to experience. Walking down the cobblestone streets of the Seaport District, they could maneuver drones through a netted obstacle course with help from AOL’s TechCrunch, practice free throws courtesy of the N.B.A., and step into a 13,412 square foot virtual reality studio, among other things.

In keeping with the goal of creating an immersive atmosphere, the Barkley Kalpak team emphasized audience engagement in the block party’s lightshow. “The concert was part of the experience we envisioned — and the Next NXT-1s and Nexus 4x4s from Chauvet certainly were key contributors to making that vision a reality,” said Reese. “We created several immersive environments within the open space, so the attendees could find the brands and activities they were the most drawn to. The stage was part of this overall experience.”

The Barkley Kalpak team had 28 Next NXT-1 moving LED panels on the concert stage and FOH booms – and 30 Nexus 4×4 LED panels arranged around the stage perimeter and on the upstage wall for audience lighting as well as visual containers. “I liked the compact size of the NXT-1 fixtures,” said Reese.  “They’re light and they have fast movement. In a concert environment, they were able to do double work, with half the weight of alternative fixtures. They have great punch when they light the stage, but they also created a really robust visual in the air. This was a valuable asset to have when lighting a mobile stage in the middle of the street in New York. We used the Nexus 4x4s in a similar way. They did great work as wash lights, but they also make a big visual statement.”

Initially, Reese was slated to use 20’ LED towers instead of the NXT-1 units.  “We had to cut the towers for budget and logistical reasons,” he said.  “It was a challenge because we had a concert element with the artists, so we really needed a lighting fixture that did a lot of scenic work. In the end we used the NXTs as stage booms, and this gave us a visual container, framing the space. From there we extended out the stage look into the audience space with additional lighting booms filled with the NXTs and the Nexus 4×4 panels.”

Reaching out into the audience with light not only created a closer connection to the stage, it also helped unify the entire block party, which encouraged visitors to view the area as one warm and welcoming platform of experiences, according to Reese. That was exactly what AOL had in mind when it developed its new approach to NewFront.