COVENTRY, UK– (For Immediate Release)  —  What is it that makes us human? “The Bridge,”  a large-scale outdoor art project breaking down the barriers of art and social change, demonstrates that there is certainly much more that unites us than divides us. Designed by Sydney-based designer Dan Potra and executed by Imagineer Productions, ‘The Bridge’ is a tourable 22 meter wide by 6-meter high bridge structure providing a platform for music, actors, and performers, all with the aim of engendering social cohesion.

After a series of “workshop days,” these events conclude within a circus-style performance, featuring international artists, including regular Cirque du Soleil performers, in an explosive finale, up to 12 meters above the ground.

To provide visual support for ‘The Bridge’s series of residencies in town centers throughout the UK, Lighting Designer Arnim Friess required a multi-purpose, flexible solution to accentuate the varied day and night program of performances, conversations, and workshops from the local artistic community. 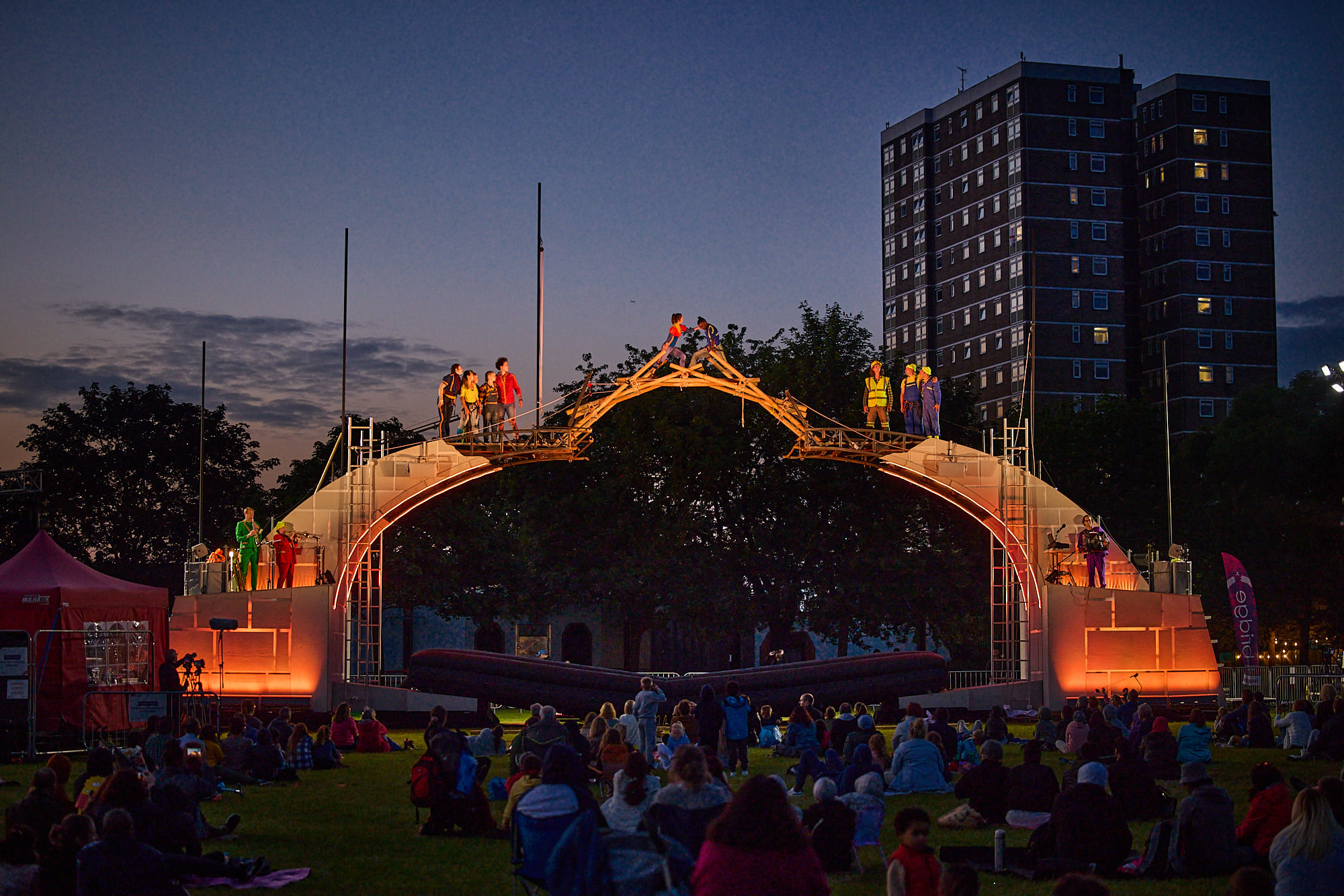 Friess’ solution, which utilized a number of CHAUVET Professional Ovation E-260WW IP fixtures, drew heavily from the fixture’s theatrical pedigree to create a cornucopia of engaging and dramatic looks for over 100,000 visitors throughout the week-long residency. During the daytime, the Ovation E-260WW fixtures provided focus, in combination with the show effect lighting.

A collection of 12 Ovation E-260WW IP fixtures were sourced from Hawthorn’s (now Encore) and positioned at front of house at a distance of between 8 and 12 meters, with six rigged from a central operating box, and a further three each side added to 6m trusses. Upon their recommendation, the E-260WW IP fixtures were initially brought in as a last-minute replacement for another fixture that wasn’t quite living up to the standards required for the outdoor city center installation.

“It’s not just the visibility that fixtures provide for the audience, but ensured even coverage they provide along the top curved performance area,” said Friess. “This is essential for acrobats to be seen by the audience, and to see each other, without being dazzled. It also helped the multi-angle camera live stream from each location.” 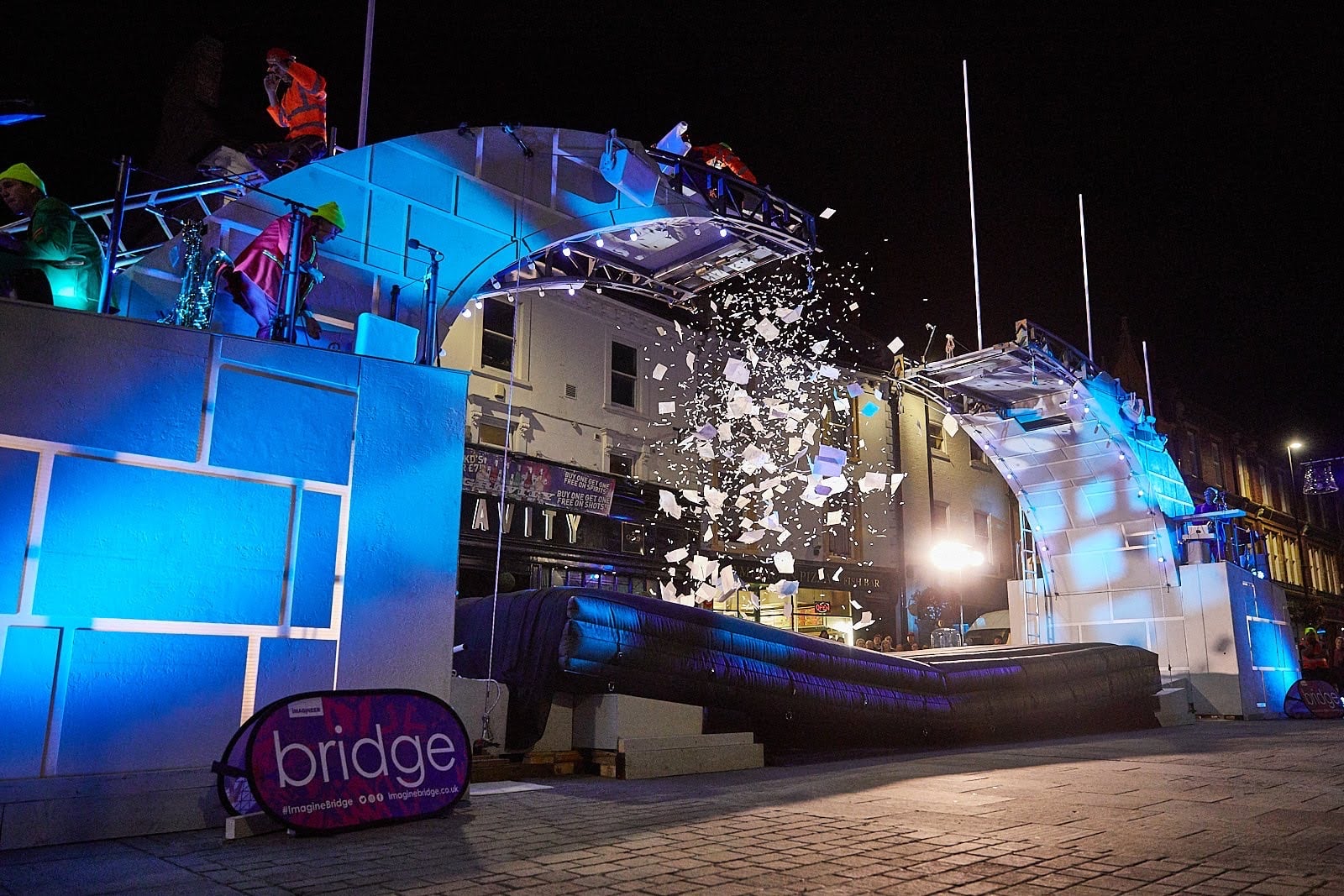 While the early inspiration for the initial creative concept came visually from the image of the war-torn Mostar Bridge in Bosnia, the wider symbolism of the bridge as a metaphor for inclusivity, democracy, and connecting across differences was a crucial factor in the Arts Council of England’s decision to tour ‘The Bridge’ around a number of UK city centers such as Dagenham, Liverpool, and Coventry. Here, locals were invited to build their own bridges and share stories of bridge-building to the backdrop of multi-cultural sonic and visual arts performances.

It didn’t take long before Friess and his team could see the benefits that the vivid colors, accurate optics, and impressive brightness could have within the challenging city environment.

To highlight the structure of the bridge, which was itself conceptually interwoven with the idea of Leonardo da Vinci’s self-supporting bridge design, Friess exploited the powerful throw of the E-260WW fixtures. Thanks to the warm white ERS-style fixture with an output equivalent to that of a tungsten 750 W source light engine, the design team could illuminate the bridge easily from a relatively large distance, rendering it possible to craft a range of dramatic and immersive looks during both the evening and daylight performances. 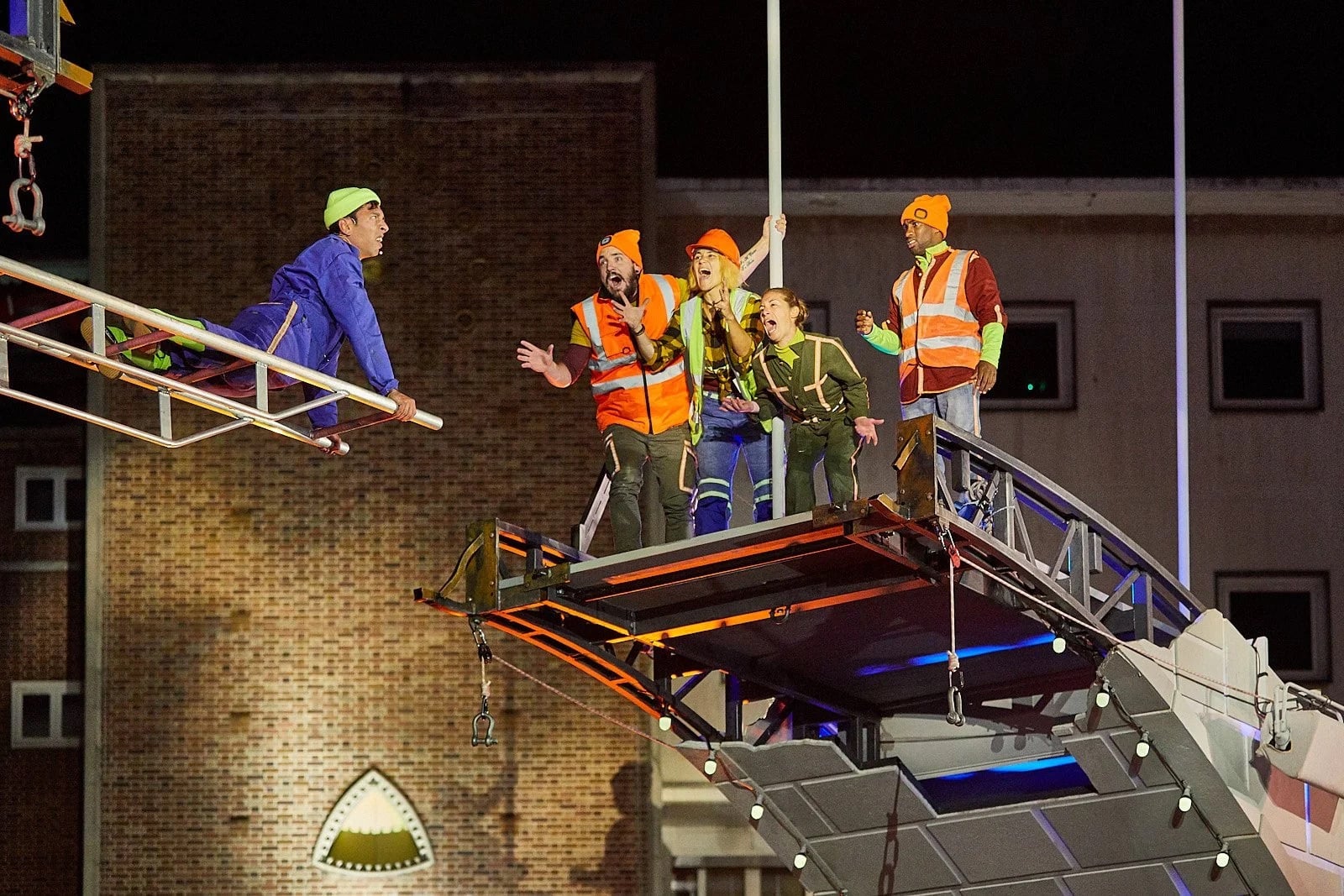 With a mix of lenses from 19 to 36 degrees, Friess was able to shape each individual Ovation fixture to provide a broad spectrum of effects for musicians playing at the foot of the stage, actors along the top of the bridge, and acrobats up to 12 meters off the ground suspended on ornate Chinese poles. The whole show was given a theatrical undertone by Friess’ additional employment of the smooth dimming curve of the fixtures, ensuring a flat and even field of light right to the bottom of the dimming curve.

“The Ovations were commented on favorably by both the director, the musicians, and the acrobats, who were pleasantly surprised with their ability to bring such a level of visual intensity to an open, outdoor event,” commented Friess. “Including the Ovations within our overall concept allowed us to support the underlying concept of ‘The Bridge’ as a metaphor for bridging differences and communities.”