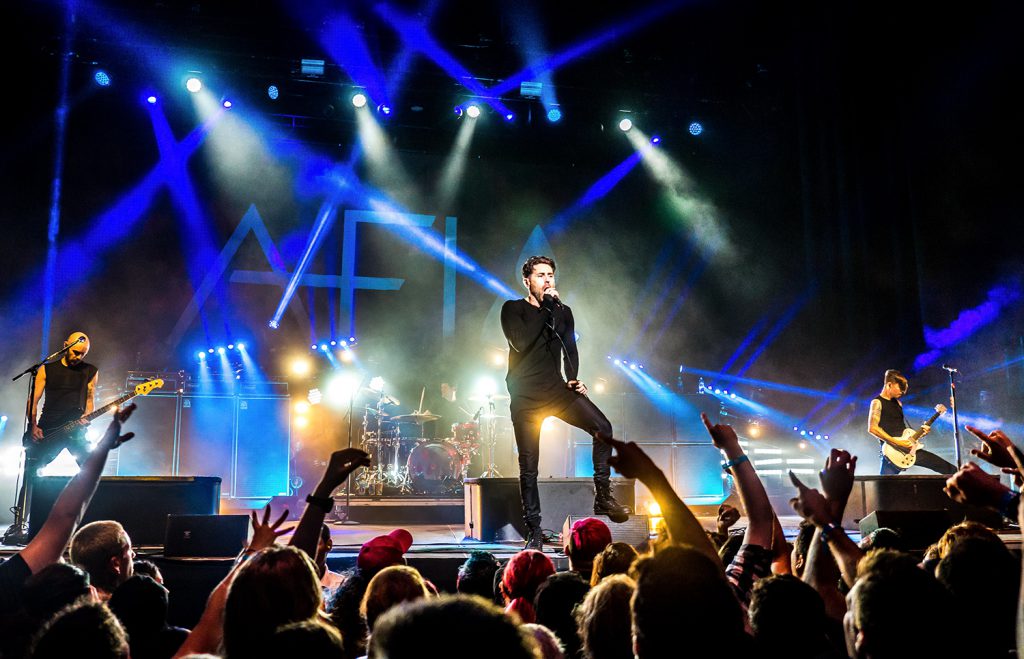 DENVER – Fans who catch AFI on the current Mourning In Amerika tour as they open for Rise Against have no doubt what the multi-platinum band’s initials stand for. Slamming the stage with the power of a thunderbolt, and burning through their songs with reckless abandon, the iconoclastic quartet seems to be driven by some internal combustible force, or “A Fire Inside.”

Matching that fire with light is an intense, sometimes foreboding and fast-moving Kelsey Gonzalez and Cort Lawrence-designed lightshow that utilizes a rig supplied by Premier Global Productions. Gonzalez, who is also lighting director on the tour, works through a set list that varies each night (she has over 90 songs programmed) to reflect the music with ever-changing patterns and colors. Helping in this endeavor are the eight CHAUVET Professional Rogue R1 FX-B fixtures in her rig.

“We have our Rogue R1 FX-Bs positioned on set carts,” she said. “There are four carts that we arrange to make one large triangle-shaped cart when they’re all on stage. Each cart has two FX-Bs, one positioned to face forward, the other facing up. This allows us to create some diverse looks and interesting geometric patterns by having the light going in different directions.”

Describing the lightshow as “relatively dark and moody,” Gonzalez creates silhouettes and eerie shadows to underscore some of the band’s more evocative songs. She relies on red, amber, and blue to serve as her base colors throughout the set, and creates impactful effects by contrasting them to other hues. “It’s hard to not have everything moving all the time with such a high-energy band,” she explained, “so I try to play with other aspects such as color and position to create an effect on top of the movement.”

Gonzalez credits the Rogue R1 FX-B fixtures with helping her achieve the wide range of looks that run throughout her show. “The ability to focus five separate LED sources in five different colors and different directions, as well as the endless pan and tilt, adds an extra dimension to the design,” she said. “Moving the FX-Bs in different ways gives us some effective light angles and shadows. The focus possibilities with the Rogue fixtures are relatively endless, which helps me create some beautiful effects. I can’t imagine my set carts without them.”

Being able to conjure up a seemingly inexhaustible array of fresh looks is essential to lighting AFI, according to Gonzalez, who notes that the band is fiercely committed to making each show unique. After releasing ten albums, many of which have cracked Billboard’s Top Ten, the band has a wealth of material to trot out to surprise audiences.

“They like to keep the set list a mystery so no two shows are the same,” said Gonzalez. “I try to keep up with the songs they practice during sound check so I can have them programmed before they show up on a set list. Sometimes, though, songs appear spur of the moment, so it’s a pretty common occurrence to have to busk a song or two a night. But that keeps things fun for me! “

Thanks to Gonzalez’s deft use of her flexible rig on the Mourning In Amerika tour, her lightshow is a whole lot of fun for audiences too.