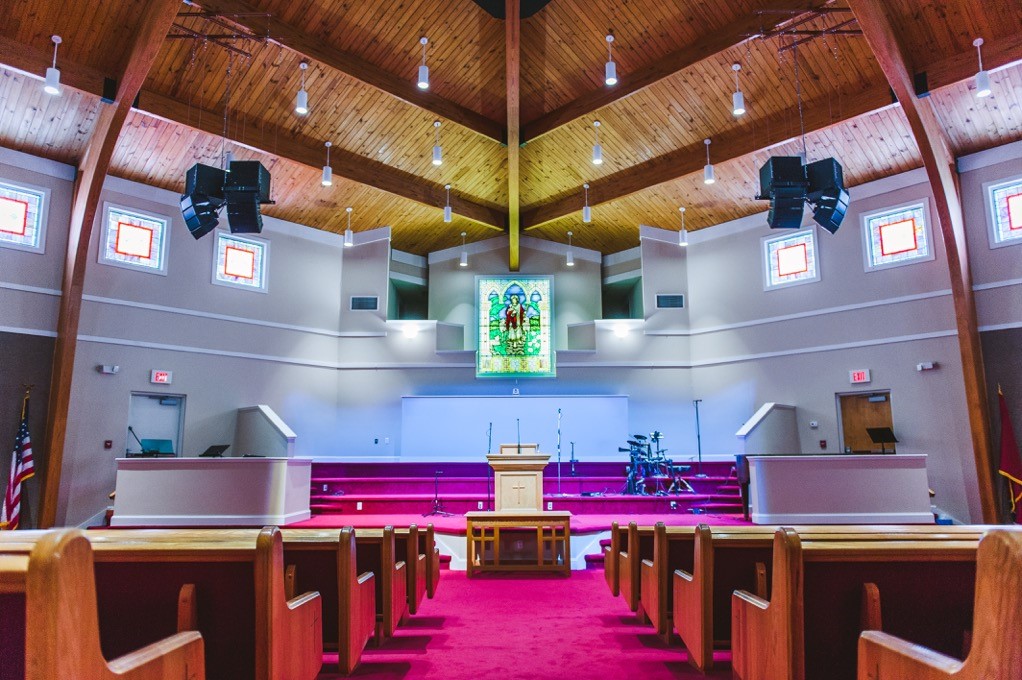 HARRIMAN, TENNESSEE – As an experienced lighting designer/installer who has brought the benefits of LED systems to numerous churches, Ken (KP) Patterson is accustomed to getting letters from tech directors and pastors thanking him for introducing their house of worship to this new technology. However, even Patterson wasn’t prepared for the response he received after installing the Ovation E-910FC ERS style LED fixture from CHAUVET Professional at Big Emory Baptist Church.

“The church sent me a letter signed by about 30 people glowing with their amazement at what the lights can do,” said Patterson. “Having gone from virtually no lighting system to something as modern and powerful, E-910FC was truly a quantum leap for them all.”

For Patterson, the letter was especially gratifying, because aside from enhancing services for church members, the new lighting system he installed also helped Big Emory Baptist take a major step toward achieving its goal of attracting more young worshippers. “This is a fairly large and modern church, but it’s a rural facility without the latest technology,” he explained. “The church is making a concerted effort to change and draw more young people.”

As a key part of this youth movement, Big Emory Baptist’s leaders wanted to give their church a more contemporary look. Replacing their very out-of-date lighting system was essential to achieving this goal.

“The church had old Par56 300-watt lamps positioned way high up in architectural fixtures,” said Patterson. “There was virtually no useable light on the stage. The church team understood very well that they could not make the impact they wanted without doing something special with lighting. They wanted special lighting for Vacation Bible School, weddings, Christmas and Easter productions and more.”

Budget and power draw were also high on the church’s list of concerns. “They expressed much desire to have the ability to add more lights later without extra electrical or rigging being added,” said Patterson. “We pretty much always operate at 208VAC unless it’s just not feasible. Plus operating at 208VAC provides plenty of room to add on via powerCON.”

Taking all of the church’s expressed needs into consideration, the Ovation E-910FC became Patterson’s logical choice for the project. The RGBA-Lime fixtures provide a full range of vivid colors, along with a flat even field to give the church’s stage an exciting contemporary look. As LED fixtures, the Ovation units met the church’s needs for low power draw. Plus, given their high output, the church could achieve the looks it was after with fewer fixtures.

“Only 12 of the E-910FCs could fit into the church’s budget for now, but given the output of these fixtures and compared with what was at the church before, the impact is quite dramatic,” said Patterson. “The new 910 is very affordable, but it has plenty of output, great color mixing and lenses, and dims extremely smoothly so it was ideal for this application.”

Patterson hung all 12 of the Ovation E-910FC fixtures high and used them for front light. “I love back light; it’s very important to me, but front light is absolutely crucial, so you need to take care of it first,” he said. “The church building has an exposed wooden beam ceiling and we hung the Ovations from those beams. Accessibility is important — more important than some functionality. If the staff at the church can’t reach the lights without an expensive lift rental and moving rows of pews, it won’t work for them.”

As part of this project, Patterson spent extra time training the church’s staff on how to get great looks from their new Ovation E-910FC fixtures. “The church was not really familiar with the operation of stage lighting, but they liked what they had seen at a few of the churches we’ve done in the area and they wanted similar to what they saw at those other churches,” he said. “Since they are very new to modern lighting consoles, we spent extra time creating looks for them to replay and also extra time training them in system operation.”

Based on the enthusiasm the church has shown for the new looks they can achieve with the Ovation fixtures, it’s likely that Big Emory Baptist will only get more involved in stage lighting in the future. “They’ve seen what lighting can do,” said Patterson. “This is something that is only going to grow.”