NEW YORK – William Succoso readily admits that he has always been “a sucker for Austrian Drapes.” With their fine curvy lines spread evenly across the width of their fabric, these puffy curtains provide, he believes, an ideal surface for light’s intricate patterns to work their magic on. The Long Island-based designer got to showcase the evocative qualities of his favorite backdrop recently, when he lit the popular Americana band I’m With Her on their Winter Tour, which ended in Chicago in early March.

“I wanted something that would reflect the warm sound of these artists’ music, yet would also be vibrant, so the drapes seemed like a natural fit,” said Succoso, who became associated with I’m With Her as a result of designing for the Punch Brothers, who are managed by the same team.

Using the drapes as the backdrop for the group, Succoso accented them with realistic colors from four CHAUVET Professional Maverick MK2 Spot fixtures. “I went with a pipe and drape design, rather than flat hanging the fabric, because I wanted to create enclosed space between the folds for the light to play in,” he said. “I also went with a silvery color to better reflect the light. My Mavericks were evenly spaced behind the women in the trio to match the angle of the pipe and drape. “The Mavericks were great as a profile light,” continued Succoso. “They gave me a lot of punch. I wasn’t running a huge amount of haze, so it was nice to have a fixture that showed the beam, even though I had just a small amount of atmosphere running. Mavericks also have a great prism, which allowed me to achieve pretty full coverage when crossing gobos onto the fabric backdrop. It was nice to be able to get this kind of coverage and this many looks out of only four fixtures, since we often had small stages on the tour.”

Also adding to the atmosphere on the tour were the six CHAUVET DJ Shocker 2 fixtures in Succoso’s rig. He positioned six of these units in a semicircle behind the trio. This arrangement allowed him to create glowing ground level backlighting that seemed to circle the band in a warm white glow that added to the ethereal mood of their performance.

“I was really searching for something that was natural looking on the band, while still getting some really rich saturation from some other LEDs,” said Succoso. “The Shockers are my go-to units when I need a small, efficient, warm-looking blinder fixture.” Maintaining an intimate connection between I’m With Her and their audience was key to Succoso’s design plan on the tour. At some of the larger venues with bigger stages this was sometimes a challenge. “This is a trio with a tight footprint, so I had to make sure to keep a tight focus on the artists when they appeared on larger stages,” he said. “At the same time, I didn’t want to distract from the artists.”

An inviting mix of warm white light and colors helped Succoso meet this challenge.
“I pretty much stuck between a nice warm palette of ambers/blinders, with some overhead blues to help not wash it out too much,” he said. “I also had a combo of blues, cyans and whites for the more cool numbers. I do have to point out that this was the first show that I’ve actually had a green song. This was ‘Apple Tree’. I went with a red/green look on the drop (on the nose with red and green apples) and then a nice gobo break-up from above with almost no front light to give the impression of shade.” 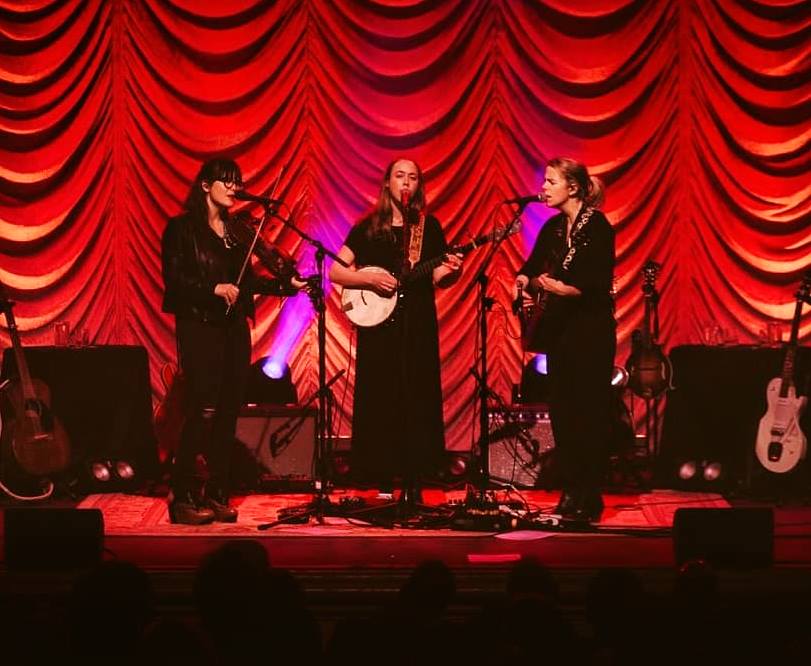 Succoso ran the boards while touring with the band, cue stacking the floor package and punting with the house lights. Occasionally, his clients would play something off the set list and he would punt along.

Looking back, Succoso feels like the show more than lived up to his expectations. “From concept/rendering to show, this design for me came out as I had envisioned,” he said. “A lot of credit goes to the team here: Tim Reitnouer at FOH, and Ashley ‘PK’ Mogayzel. As a designer, sometimes you have to sacrifice what’s in your head for the reality of technology we live in, and I felt like I didn’t have to do that one bit with this design. That includes the way I used lights, and the way I used the Austrian Drapes.”