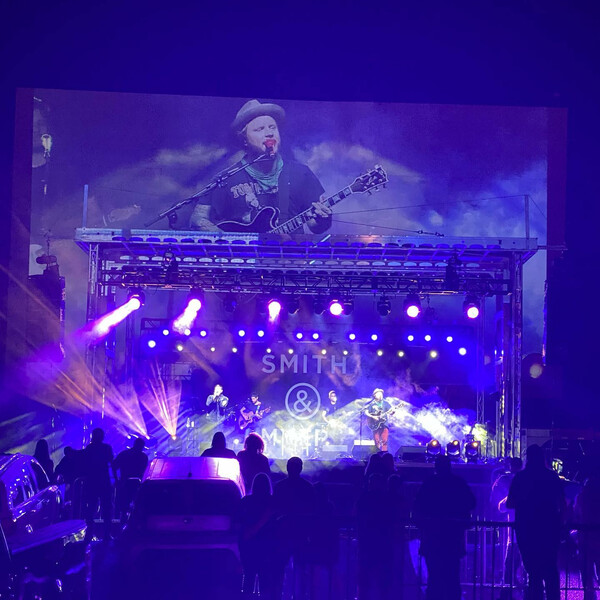 MEMPHIS – When he was busy touring with the likes of Jinger and Devil Driver, Wes Youngblood immersed himself in creating searing intense looks to match the thrashing sound of his clients.

Of course, that all came to a screeching halt when the pandemic hit, but on October 21, Youngblood got to flex his design skills again; only this time instead of lighting metal music, he was working a drive-in show for Smith & Myers, an acoustic side project by Shinedown frontman Brent Smith and guitarist Zach Myers.

Although the melodious harmonies emanating from the mobile stage at the Malco Summer Theatre on that warm Wednesday night were worlds apart from the sort of music Youngblood is accustomed to lighting, he was able to draw on his metallic experience to meet some of the unique challenges of lighting a drive-in concert.

“The promoter and I spoke at great lengths about steps we could take to create a fully encapsulating experience in a setting where the stage is relatively small and the audience is very spread out in cars,” said Youngblood, the owner of Skunk Werkz Productions. “We had delay towers for audio scattered around the parking lot, and had IMAG on three screens to bring the show closer to people. 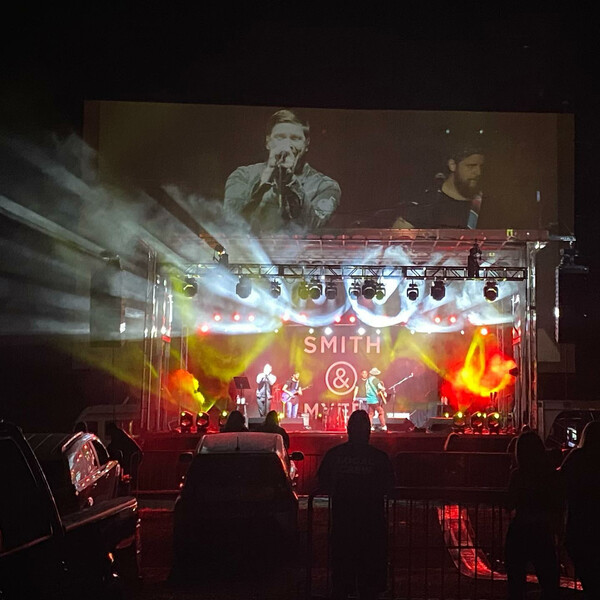 “From a lighting standpoint, I relied on a concept from my electronic jam band and metal time – that is to have some light on the crowd, some on the stage and some on the band… then keep flipping them,” he continued. “So, we didn’t rely on your typical blinder looks. In a perfect world, this show would be like what Candace Brightman and Paul Hoffman designed for the Grateful Dead ‘Fare Thee Well.’ At the end of the day, though, we created the kind of audience experience we were after.”

Helping Youngblood accomplish this were his rig’s 14 Rogue R1X Wash, eight Rogue R2X Wash and 10 Rogue R2X Spot fixtures supplied from his own Skunk Werkz Productions inventory. “I just rotated out my Chauvet Rogue R1 Washes for the new Rogue R1X Washes and replaced some static COLORado fixtures with the new R2X Washes,” he said. “This was the first time since Covid19 hit that they had made it out of the shop for use in a show.”

Given the acoustic nature of Smith & Myers’ music, these fixtures played a somewhat different role in Youngblood’s design than movers normally would for his more aggressive sounding clients. Rather than call forth fast and intense pan and tilt movements and dramatic sweeps, he relied more on evocative color changes to engage the drive-in crowd. 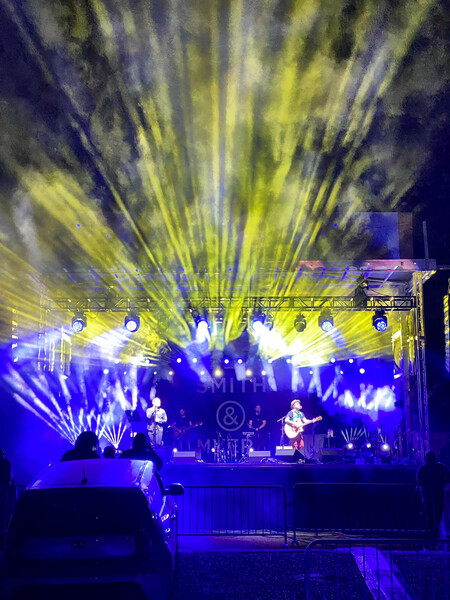 “In my opinion, with a show like Smith & Myers it would be kind of goofy to throw a bunch of movement and high energy attributes,” said Youngblood, who ran his drive-in rig with a ChamSys MagicQ MQ80. “So, you got to find another way to make it look over the top. In this case it was the way I used colors and gobos. Since I do not have experience with this band, and was not familiar with the material, my color palette selection came from how it made me feel.”

Following his intuition, Youngblood created a series of engaging looks that reached out to the crowd. At one point, as Smith & Myers slipped seamlessly into an Alice in Chains cover of “Nutshell,” he killed the upstage wash and activated the UV on his spots and hybrids to create a mesmerizing image.

Another memorable look was created when the artists covered Phil Collins’ “Something in the Air Tonight.” Youngblood recalls how it worked: “I love the deep blue saturation of the Rogue fixtures. It pops almost like a congo. So, I used a blue wash and NC on the hybrids and spots, both with slow rotating gobos and just bombed out the haze. I figured if you could ‘see’ the actual air via the haze it would fit the idea of the song. Also, on the original song for some reason I’ve always envisioned the guitar volume swells to just be lurking in the thickness of the air.”

“The white mode and color calibration modes are amazing in the new Rogue X series washes,” said Youngblood. “All my key lighting was the R2Xs in white mode. I purchased the R2X wash to replace some COLORado VW pars. My Chauvet rep had sent me them to try. I never want to do a par focus ever again. But the new Rogue “X” Wash series are awesome, with 25-watt diodes they crush and cut through whatever you throw at them.”

When the pandemic ultimately comes to an end, Youngblood will undoubtably be using these high output fixtures to create eye-piercing looks for his metal clients. For now, he is grateful to have had the opportunity to set a more mellow ambience for a world-class acoustic act. In the process, he clearly demonstrated that, like great music, thoughtful lighting design, has no trouble hoping genres. 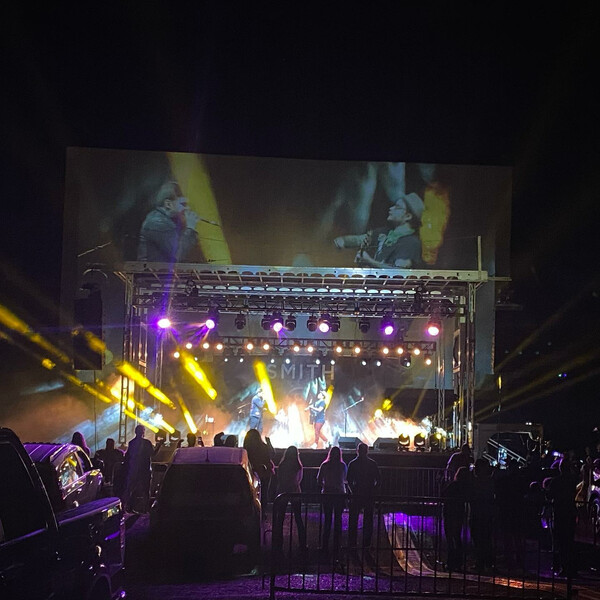