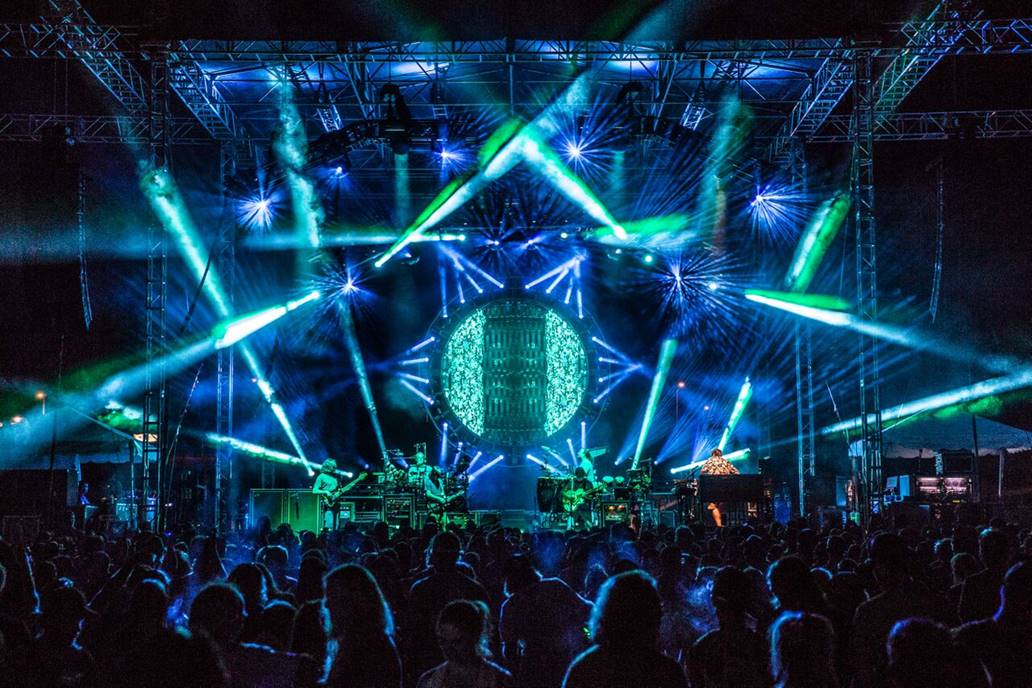 There are no straight lines on the jam band lighting road map – at least not as far as Andrew Cass is concerned. The lighting designer for The String Cheese Incident and a host of other jam band heavies, Cass wouldn’t have it any other way either. To him, the sheer joy of working the jam band circuit is the unpredictability that is built into every single show.

Jam band artists never really know where a show is going to take them when they pick up their instruments on any given night. Veering off suddenly in unexpected directions is part of their journey – and they expect their lighting designer to go along for the ride. Punting is as essential to a jam band LD as swagger is to a lead singer. If you don’t have it in you, says Cass you probably should look for another line of work.

Cass took some time from his always frantic touring schedule to sit down with us and discuss the winding road of jam band lighting.

You’ve done work for a lot of different jam bands. How did it all begin?
“I started my lighting career while getting a music industry degree from Northeastern University and worked with some regional jam bands such as Addison Groove Project, Percy Hill, and The Assembly of Dust . My first real break into bigger shows was working for Matisyahu as operator for a show designed by Marc Janowitz. Marc was a big part of my development and he got me involved with artists like Dr Dog and Passion Pit. I also worked with EDM acts The Pnuma Trio, Future Rock, and in many different positions over the years with Bassnectar.” 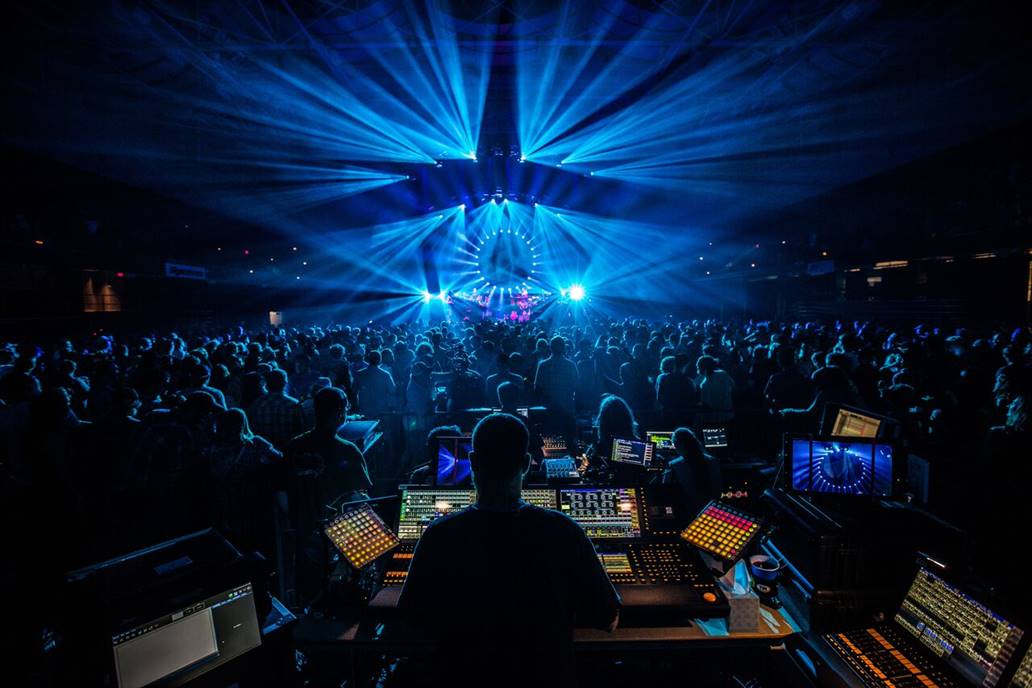 One of the things fans love about Jam bands is that they always seem ready to move in different musical directions on the spur of the moment. How do you prepare for this every night when you work for a jam band?
“Early in my career I really focused on punting ability. I watched other designers and how they dealt with the unpredictability of jam bands. I would say that when lighting a jam band if you don’t punt some of the show then you’re missing the point. What you do for a jam band is not supposed to be perfect, but it is supposed to go with the flow. The potential for every show to be amazing is based on how it’s played that day. Variety and the element of surprise is what drives a jam band’s fan to see their shows time and again. They don’t see it as the same show, they see it as a new experience each time they go to a concert. My goal is to be a part of that unique journey with lighting.”

Since punting is so important, what advice do you have on doing it successfully?
“If you want to punt for a jam band, you need to understand what that band is all about. A great jam is like a conversation. Sometimes it’s two people talking back and forth and sometimes it’s everyone yelling in unison or one person speaking to the group. I try to pick out the pieces of the conversation that are out front and represent those voices in my lighting. When someone is truly soloing I try to have the audience focus on that soloist and when the conversation includes the group or if no one is in the lead I pull back and let the lighting be the focus until someone comes forward in the mix.”

Festivals are another fact of life for most jam bands. How does lighting a festival compare to lighting a concert at a fixed indoor venue?
“Festivals are a totally different ballgame. It is a real test for you as a LD to be able to take your touring show file and transform it to a festival setting. We call it ‘cloning’ in GrandMA terminology – and it is most definitely its own art form. I always keeping this in mind when programming. Meaning if I’m on tour with the same rig every night and I program something particularly specific to that rig I have to consider how that information will clone to a festival at a later time with a different configuration.”

It may be hard to generalize, but do jam bands tend to want a different lighting look than other bands?
“Most jam band rigs are spot and beam fixture heavy because they tend to do more aerial work in the space above the band then other genres. Because of this you won’t see much upstage wash, since this impedes the negative space needed to see the beams. Generally you will see more pan and tilt movement in jam band lighting then the traditional MIB concept and primarily saturated colors. As you move towards the EDM side of it you see more strobe fixtures and video and we are all known to be heavy on haze.” 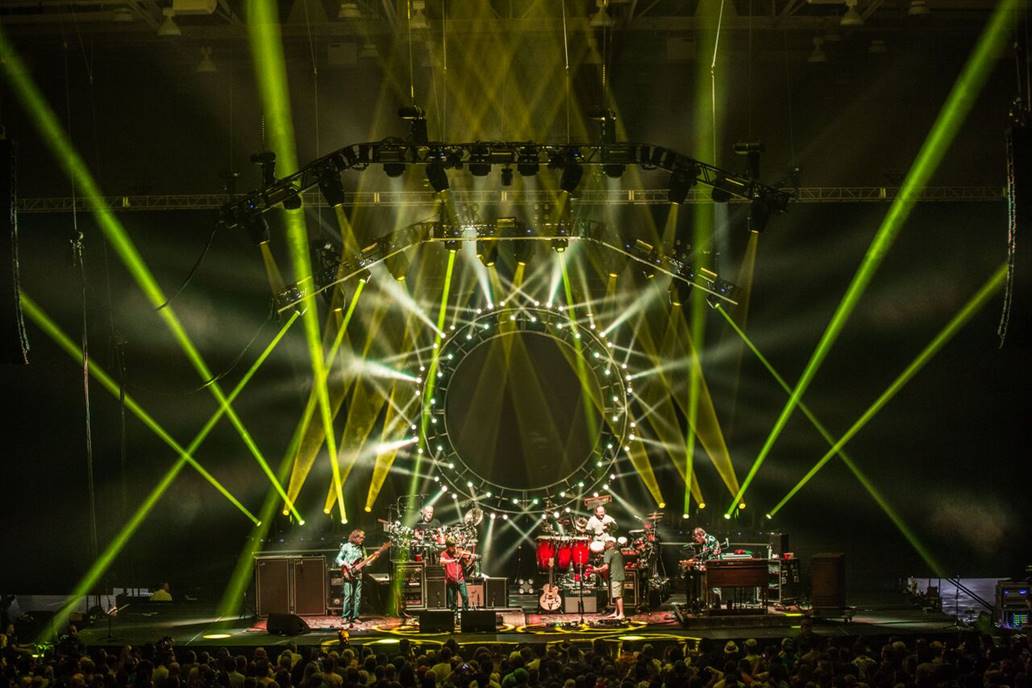 What’s the best thing about working for a jam band?
“FREEDOM! We get away with lighting murder compared to the pop world. With String Cheese Incident I can pull the front light and leave them in dark for a few minutes at a time and let the light rig be the visual focus. This gives us a lot of control over how the show is perceived. It’s all about keeping a balance between what you want to see, what the audience wants to see and how the band wants it to feel on stage. Each jam band and their fan base is different and wants to see the show differently. With Stringed Cheese I have started to use a lot of live cameras in our video show because I enjoy watching the musicians play and I didn’t want to use “Psychedelic” video content because I just don’t find it interesting to watch anymore.”

Ok, then what’s the worst part of working for a jam band?
“The constant change. . . It’s not really the worst because it makes the show fresh and has made me a better programmer but jam bands tend to constantly change their lighting and video designs. My show file for Stringed Cheese Incident is now almost 3 years old and I have about 90 songs programmed. For a large festival or a new design it takes me a few weeks of programming to be fully prepared. Essentially as I make the show bigger and include more songs I am constantly creating more work every time I have to clone it.”

Traveling is a big part of life for most jam bands. Does this factor into your decision on what type of fixtures to use in your rig for groups like Stringed Cheese Incident?
“Certainly road worthiness is important and if a fixture is a dud on the road the industry will usually weed it out of the rental market. I often use fixtures right when they come out which sometimes leads me to being the beta tester but I’ve had some great results as well and it gives the show a new look.”